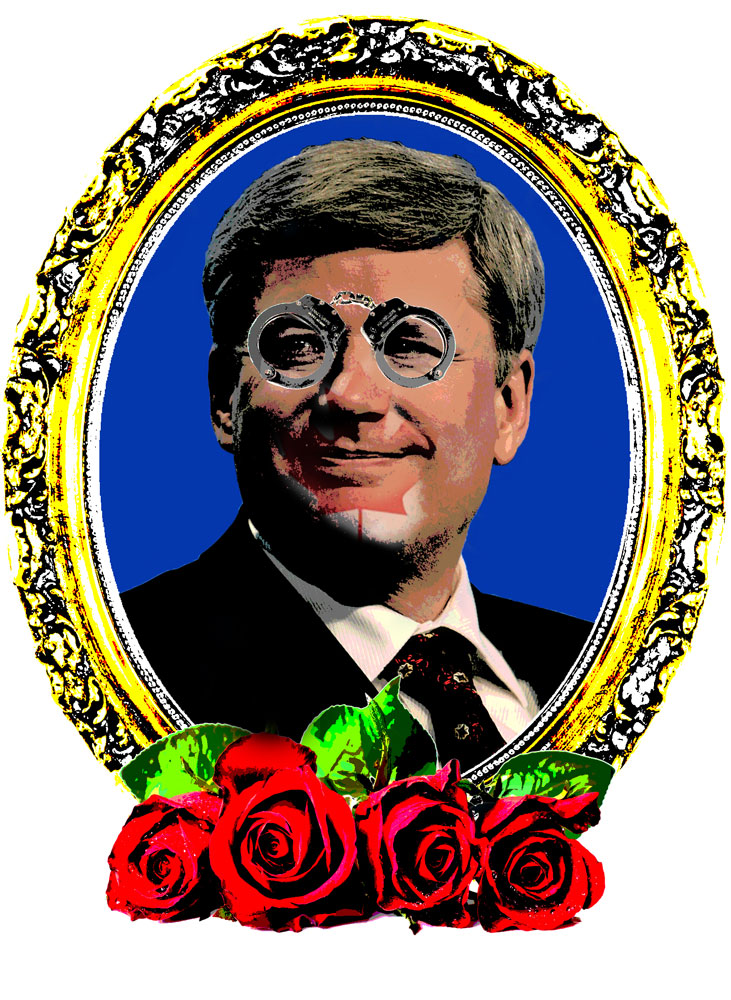 It’s time I came clean. I love you. I’ve wanted to say it for a long time, but after reading bill C-51, I just can’t keep it bottled up inside any longer. It’s got me all hot and bothered.

I can’t stop thinking about you, Mr. Harper. Every time I visit a Government of Canada website—I’m sorry, a Harper government website—I’m reminded of you. There’s a lot more blue than there used to be on government websites, which is good – they match the Economic Action Plan signs, and I like well-coiffed visual propaganda.

I love the way you prioritize spending. Buy fighter jets, and reduce Environment and Parks Canada budgets. You know how to spend money. I was really sorry I missed your War of 1812 party; I hear you spared no expense. But with less money for the CBC, you could afford to splurge.

I love your confidence. You didn’t let statisticians tell you the best way to gather statistics. You didn’t miss a beat when you tried to appoint someone to the Supreme Court who wasn’t actually eligible to sit. Kyoto had to go, and you made sure it went. I still shiver when I remember how you stripped the Navigable Waters Act.

I love the way you take control. Dominate archivists and librarians, muzzle scientists, show those veterans who their daddy is. I felt kind of left out, was starting to think maybe I wasn’t your type. But then I found out that environmental groups are being audited and having their charitable status revoked, and I bit my tongue in anticipation.

I love your big, bulging omnibus bills. No time for judicial oversight or parliamentary debate. Just ram it in. You do it a lot; you’ve got experience. I’m sure your omnibuses are clean. It’s enough to make a man faint – but that’s why you prorogue, and like a pro. Hot and cold, legislative edging.

That’s what put me over the edge. That’s what made me realize: you know what I want, and you’re going to give it to me; I didn’t even need to ask. I don’t want a soft, baby-hands Canada. I want a strong Canada, a manly Canada. I want your Canada, Mr. Harper.

I want a Canada where CSIS has the power to arrest me, and then do anything it wants to me short of “causing death or bodily harm” or “violating my sexual integrity” – I always wanted to try waterboarding. I want a Canada where voicing an opinion which may lead someone to commit an act of terrorism, uttered in private or in public, can get me arrested.

I want a Canada where “interference with critical infrastructure,” like railways, highways, and pipelines, is considered an “activity that undermines the security of Canada.” I want a Canada where a peaceful protest—even voicing support for what the soft-hearted among us may consider valid forms of political dissent—can get me wiretapped, watched, arrested.

Shh! I know what you’re going to say. Valid protests are exempt. Artistic expression, too. But you don’t have to lie to me, Mr. Harper. I’ve been watching you, Mr. Harper, and I know your willingness to twist or ignore laws you don’t like, to silence dissent, to mislead and lie.

I want a Canada where the prime minister fans public fear of harm, to introduce legislation that erodes the liberties essential to keeping a democracy healthy, liberties which are needed to heal the sick democracy that ours has become. Where you, Mr. Harper, use fear generated by terrorists to your own ends.

But you’re one step ahead, Mr. Harper. You always are. That’s what I love about you. Terrorism can include “unduly influencing the government of Canada” – which is, of course, the Harper government. So any rail or pipeline blocking in protest of any of your policies, or any advocating for such becomes terrorism. Never change, Mr. Harper. I love you just the way you are.

Experiments in a fertile reality