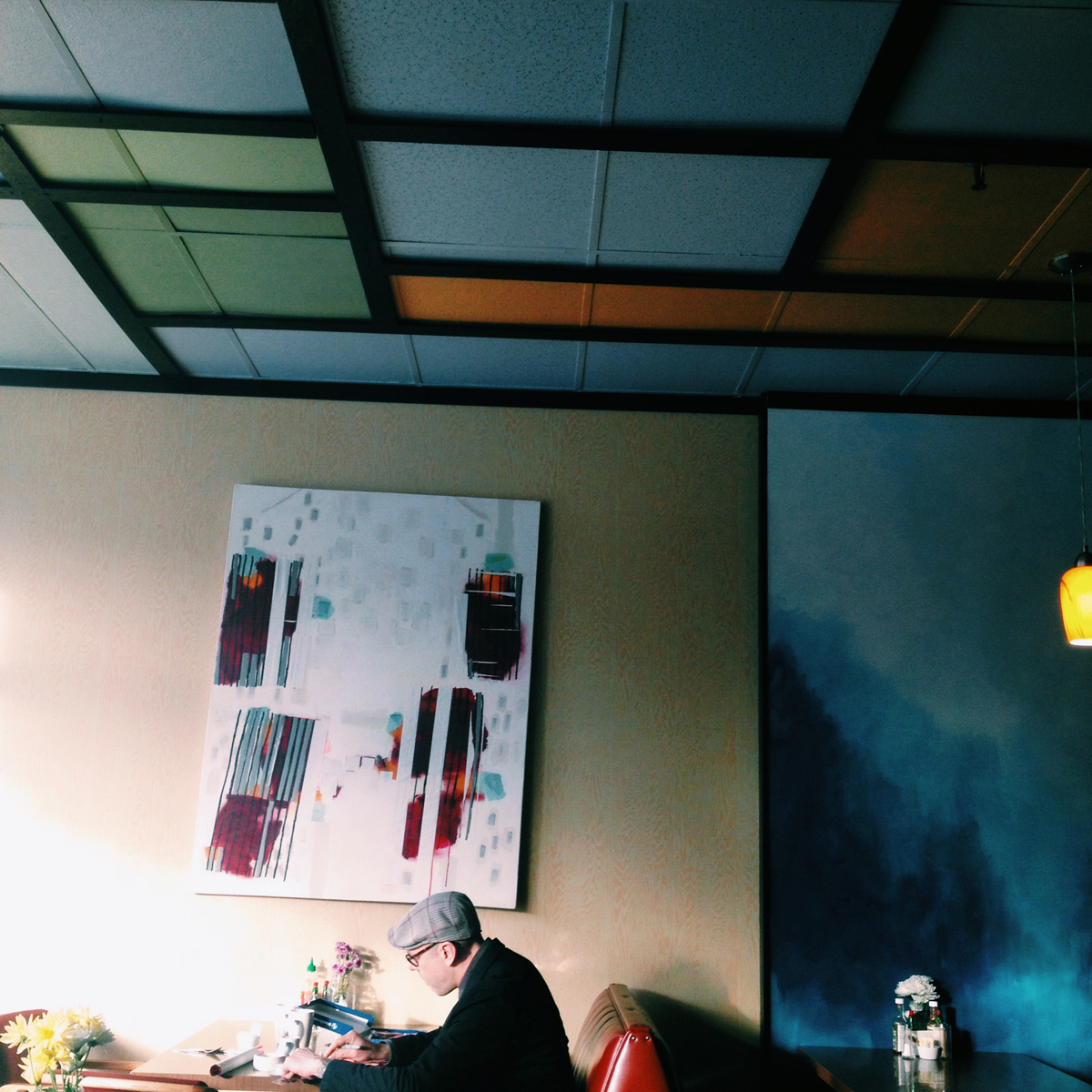 Breaking the barrier between artist and patron has been a long-standing mandate of Synonym Art Consultation; the goal being to integrate the artist community with the rest of Winnipeg. Their latest project, the Tallest Poppy Residency Program, acts as an inevitable extension of their directive.

The residency program, running for two days per month, transforms the dining room of the Tallest Poppy into a temporary studio for the artist, wherein the public is encouraged to interact with the artist as they work.

“The idea is to focus on the artist’s process, which not a lot of the public really understand or face really with art. It’s really easy to walk in and see a painting and judge it as a finished project, so this is a chance for the public audience to see what goes on behind the practice of an artist,” said Chloe Chafe of Synonym Art Consultation.

“It was just sort of obvious to work together, and we already have an installation in there from our mural festival from last fall, so it was just a way to extend our interaction with the restaurant. It was just the next inevitable step,” said Synonym’s Andrew Eastman.

The Tallest Poppy owner and chef, Talia Syrie, approached Synonym with the idea following the opening of the restaurant at the new Sherbrook location, due to the success of the program at the old site.

“When we opened here [Sherbrook], I approached Andrew and Chloe about starting it here again. And they just took it and ran a marathon. I can’t even believe what they’ve come up with; it’s so much more than I thought it would be,” said Syrie.

The first installment of the residency program took place on Jan. 24 and 25 with Christian Procter as the resident artist. During the two-day period, Procter moved from table to table, stenciling out what will eventually become paintings on each tabletop, to match some of the existing furniture within the diner.

“A few of our tables have a print on them; it’s kind of old-style, kind of these long-horned ram or bulls, cows; sort of an old western print on some of our tables that we salvaged from the basement of the hotel. And so he thought it would be neat to do some more print, a variation, painted onto the other tables that we brought from the other restaurant,” explained Syrie.

“He’s creating this whole new collective of symbols that he has been stenciling onto each one of the tables in the restaurant. So the entire restaurant is going to have this conformity to it, while playing off of the old furniture,” said Chafe.

While not all of the artists’ works will remain within the restaurant for longer than a month, Chafe and Eastman are glad the inaugural installation will be more permanent.

“Each project will have some sort of concrete aspect – either documentation or a physical project after the two-day residency is finished, which will be up for at least one month until the next one. But in this case, they will be on the tables permanently,” said Eastman.

“Maybe they’ll fade off from all the coffee stains and stuff, but it’s definitely a fun way to start it off, with the long-term project.”

Procter’s artwork will be unveiled on Feb. 20 as part of the residency program’s launch – one of Synonym’s storied art parties, in which the Poppy will be transformed from a diner into more of a bar, complete with music and signature cocktails by Steve Ackerman.

“It highlights what the business does best, and the artist, and the musicians,” added Eastman.

“I think having an artist in the restaurant that people can engage with, they can ask them what they’re doing, it makes the whole experience of being here more interactive for everybody,” Syrie told the Manitoban.

The Tallest Poppy Residency Program will take place for two days each month at the Tallest Poppy (103 Sherbrook Street). Synonym is currently looking for artists to take residency; application is available at synonymartconsultation.com

Cupcakes : Out of control, Art : In your budget