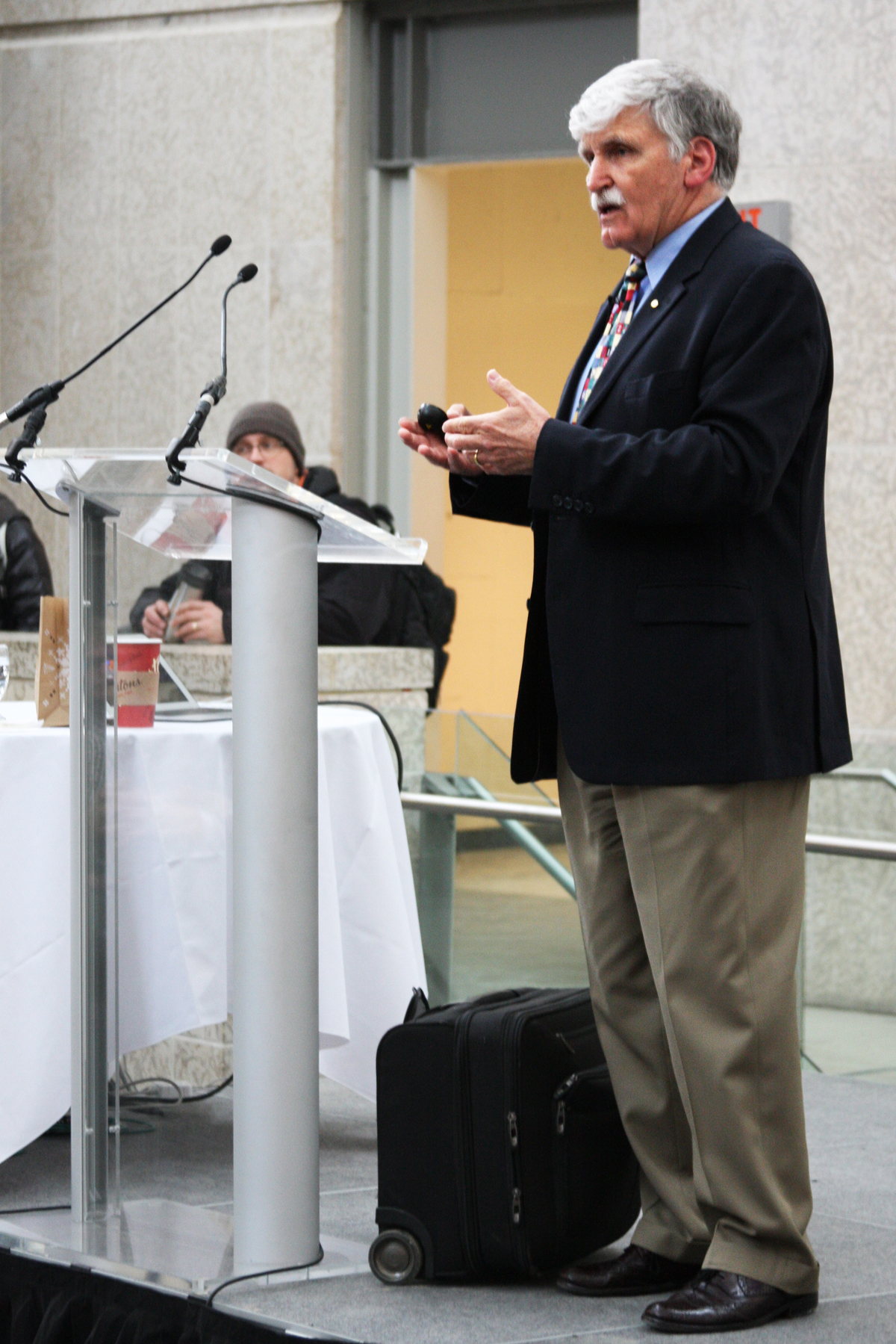 Lieutenant-General Roméo Dallaire—who, after witnessing to the 1993-1994 Rwandan genocide as the force commander for the United Nations Assistance Mission for Rwanda, has become an advocate for human rights, mental health, and child soldiers—spoke at the University of Manitoba on Jan. 22 as part of UMSU’s Frost speaker series.

The atrium of the Engineering and Information Technology Complex was filled with spectators for Dallaire’s speech, with a handful of audience members waiting upwards of two hours for front row seats.

Dallaire touched upon personal experiences from his time in Rwanda. He explained how he saw his son’s eyes when he looked into the eyes of a Rwandan child, found in a house of decaying bodies. He said, “That child was just as human as my son, yet look at the constructs of which they find themselves.”

The topic of inherent equality and universal humanity resurfaced a number of times throughout Dallaire’s speech.
Dallaire was ordered out of Rwanda because “the world can’t handle more peacekeepers being killed.

“The world could handle 10,000 Rwandans being slaughtered every day, but it couldn’t handle 450 peacekeepers being killed.” He said his morals kept him from leaving, because he was protecting 30,000 Rwandans and as a nation, and we ask ourselves if we should spill our blood to protect others, or if we intervene only when it suits us.

With the end of the classic era of giant armies facing other giant armies, our classic methods of the use of force have also ended and the world has fundamentally changed since his generation, he said, asking the audience if they accept the recent restrictions of civil liberties, denial of human rights, acceptance of torture, and Guantanamo Bay.

“We are in a revolutionary period.”

He argued that the only solution to perpetual conflict is to address the rampant poverty that exists in the world, because poverty breeds rage. For this reason, long-term commitments are necessary to begin to alleviate poverty, which will stabilize a country. The 12-year Canadian involvement in Afghanistan was much too short; Dallaire argues that commitments up to 60 years in length may be needed to build stable democracies.

One U of M psychology student Fiona Axelsson described the event as a “once-in-a-lifetime experience to be with a Canadian legend.”

University of Manitoba students Ntwali Fabrice and Namurambaho Raoul, from Rwanda, had the chance to meet Dallaire after the presentation. Ntwali said, “I wanted to know him; I wanted to hear what he experienced in our country.”
Both students lost family members in the Rwandan genocide, and felt it was meaningful to meet and talk to the man who helped protect Rwandan refugees.

MANITOBAN: If you could give a call to action to millennials, with regards to human rights and social justice, what would that be?

DALLAIRE: I think that you’re going to have to listen to my presentation, particularly some of my last slides; because that’s where I give you guys some guidance.

First of all, the perception of how you’ve described your generation is there only because it has not been informed enough. We’re seeing far more of your generation going to visit developing countries than that go to Europe, which is a massive shift than from before, when everything was in Europe. I think that’s the first thing.

The second thing is that you are already a generation without borders, which I’ll explain. Okay, you’re already global, so you’ve got a much better ability to feel what the hell is going on in the world and humanity than we ever had. And so, you’re empowered by so much capability the only thing that is required is to give you a sense of participation, and essentially, activism. I’m saying that you guys have all the reasons to be activists, you’ve got the tools to coalesce, you’ve got the tools to influence, and, by becoming activists you will gain, in fact, that momentum to change.

And, to give you credibility is you’ve got to go and get your boots dirty.

So I say that your generation, you should have a sort of a rite of passage, which I’ll explain later, which is underneath your bed, there should be a pair of sneakers or boots that have been dirtied or soiled in the earth of a developing country. Go for three weeks, a month. Just go, see, taste, hear, feel what’s going on with 80 per cent of humanity. Bring that back and join non-governmental organizations, create NGOs, get out there and become activists.

M: What do you think of students using social media as a form of activism?

D: I think that you cannot erase the facts of humanly being on the ground. So, the social media does not replace that; what it does, it’s a force multiplier. It permits you to get that out there more, to be able to exchange it more, to bring your own picture, live, from where you are in the field to the gang back home.

I think, also, the social media is still a very immature system, so you’ve got to watch it because sometimes you can create movements that just, are either not credible or are not ethical. Invisible children, remember that? Go get Kony, right? And the world went wild. There is no way you could do that; and some of the material that was used was wrong. And so, you know what Kony did with that? It empowered him. I mean hey, the world knows about him now, he doesn’t give a shit.

M: How can students lobby to increase Canada’s commitment to multilateralism and peacekeeping?

D: Engagement in the NGO world, and help them coalesce and become the lobby of the community, of the population. It’s not necessarily joining political parties, it is using tools to influence the political parties. And, I think the coalescing of NGOs, who are the eyes and the ears, the witnesses of humanity, they are without borders, and so, I believe they will become that body that’s going to bring the voice of humanity to the politicians to change policy, to influence public opinion. So that’s the route to go.