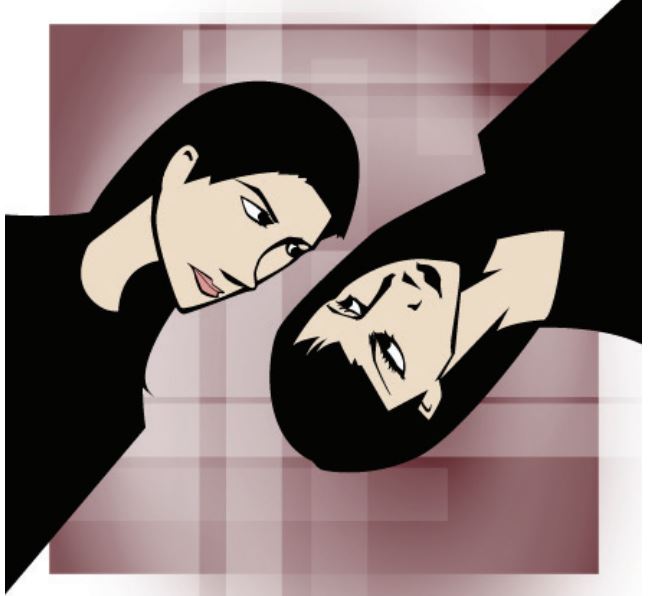 “Can you please just get out of my way?” Melissa demanded.

“Seriously, what the hell?” Amy objected as Melissa’s elbow dug into her ribs, jostling her away from the bathroom mirror. “I was in here first.”

“Yeah, but Evan is going to be here soon,” Melissa said. She was already pulling her makeup kit out of the drawer, not bothering to spare even a sideways glance for her sister. “So I’m kind of in a hurry. You can have the bathroom when I’m done.”

This time Melissa did spare a sickeningly sweet look of indulgence for Amy. “Oh, I’m sorry, big sister,” she said. “Do you have a date tonight too?”

“Why do you have to be such a bitch?” Amy asked. Melissa was always taking shots at her like she was ugly and couldn’t possibly get a date, despite the fact that they looked so similar to each other. Amy might not dress as alluring or wear as much makeup, but she knew could attract a guy if she wanted to. She didn’t really see the appeal, though.

“All I want to do is brush my teeth and stuff,” Amy said, trying to be diplomatic. “I won’t even be five minutes. Just let me go first.”

“Brush your teeth?” Melissa scoffed, already applying her mascara. “Why bother? No one is going anywhere near that mouth. Now will you please get out of here so I can have some privacy?”

Amy did step out of the bathroom then, but only a step, because that was how far she needed to go so she could lean over the railing and yell downstairs to their mother.

“Mom, Mel is being a bitch again!” she shouted.

“Watch your mouth, young lady!” her mom shouted back.

“I don’t want to hear that language in this household. I raised you better than that.”

Amy rolled her eyes. “Can you just tell her to get out of the bathroom? I was in there first.”

And with that she slammed the door shut.

“Just let her be,” Mom called up to Amy. “She won’t be long. A little waiting isn’t going to kill you.”

“You know she takes forever in there,” Amy complained. “Besides, I was in there first.”

“Amy, she’s your little sister,” Mom said, starting to sound impatient. “Cut her some slack. You’re supposed to be looking out for her, you know.”

Amy rolled her eyes again. Right, she was supposed to be looking out for Melissa. She wasn’t even a full year older, but it was like their parents expected Amy to carry Melissa around in a little pouch like some kind of marsupial guardian. If they were out playing hopscotch on the sidewalk and Melissa fell and scraped her knee, the question was always why Amy wasn’t keeping a closer eye on her little sister. Or if Melissa’s grades weren’t as good as Amy’s, it was always asked why Amy hadn’t done more to help Melissa with her schoolwork. And when the two sisters fought, as they had many times, both verbally and physically, it always boiled down to why couldn’t Amy be the mature one and broker peace. Everyone was always clamouring to give Melissa the whole world on a silver platter and Amy’s only purpose in life was to make sure that she didn’t drop it and smash it to pieces.

“Whatever,” Amy muttered. She stormed downstairs, making sure that every stomp of her feet reverberated through the house. She slumped onto the couch in the living room, picked up the remote, and started flipping through the channel guide. She scrolled fast, squeezing the little down arrow like she had the remote pinned in a thumb war. She wasn’t even paying attention to what was on the screen. Amy just wanted to sit there and fume.

Melissa came racing down the stairs then, not seeming in much better spirits than Amy despite having won the battle for the bathroom. Melissa threw open the door of the linen closet and began rifling through it.

“Are you done yet?” Amy asked.

“Does it look like I’m done?” Melissa asked. She spread her arms out wide to accentuate the fact that she was clad in nothing more than a towel and a bra.

Melissa turned back to the closet. “I’d be done a lot faster if there were ever enough towels,” she said.

Then something caught Amy’s eye.

“What the hell, is that my bra?” she accused.

Melissa turned again, smiling that insufferable smile of hers. “This?” she asked innocently. “I’m pretty sure it’s mine. You really think this would fit you? It would hang off you like grapes in a hammock.”

“Sure we are, sis. After a box of Kleenex or two.”

“You are such a bitch,” Amy said, shaking her head.

“Whatever. By the way, where are the car keys?”

“Why? This is my night with the car.”

“So? You’re not going to use it. Evan’s car is in the shop and he needs me to drive tonight.”

“Not my problem,” Amy said smugly, glad to finally have the upper hand on her sister.

“No way are you ruining my night,” Melissa said. “Mom! Amy won’t let me take the car out!”

“Why won’t you let your sister use the car, Amy?” Mom’s voice drifted out to them.

“I might want to use it later,” Amy said.

“I was thinking about going to see a movie or something.”

“Just let your sister use the car, honey,” Mom’s tired voice decreed. “There are plenty of movies you can watch on TV.”

“Oh my god, fine, whatever,” Amy huffed. “The keys are on my dresser.”

“Thanks,” Melissa smirked. Then the doorbell rang, and Melissa’s face contorted in horror.

“Oh my god, he’s already here!” she cried, turning and racing back up the stairs. “Tell him I’ll be right down!”

“Yeah, yeah,” Amy said, pulling herself up off the couch.

Amy opened the front door and there was Evan, in all his stereotypical jock glory. His blond hair was cut short and neatly combed to one side. The sleeves of the baby blue shirt he was wearing were long, but it was tight enough that the muscles underneath were obvious anyway. He looked like he’d been plucked right out of some teen movie from the 90s.

“She’s still in the bathroom,” Amy said, doing her best to smile pleasantly. “Come on in and have a seat.”

“Is she going to be long?” he asked, settling into a place in the middle of the couch.

“She should only be a couple minutes,” Amy said. She came to stand near the edge of the couch and cocked her eyebrow at Evan.

“Sorry, did you want to sit down?” Evan asked, moving to scooch over.

“That’s okay,” Amy said. She stepped over Evan with one leg and sat down in his lap, straddling him and locking her fingers behind his neck. “This spot is fine.” She lunged forward and assaulted him with a deep, hungry kiss.

“Whoa,” Evan said, grabbing Amy’s shoulders and holding her back, after a few seconds had passed, mind you. “We can’t be doing this.”

“Oh, we have plenty of time,” Amy purred.

Amy locked Evan in another violent kiss, and this time he didn’t resist. She ran her fingers through his hair, or tried to, and was totally unsatisfied by the lack of a mane she found there. She ran her hands over his body and was mildly disgusted by the bulk of corded muscles under her fingertips. She tried not to cringe as his hands crept up under her shirt, and his tongue probing her mouth made her feel faintly like vomiting.

Her hands slipped down to unbutton his pants.

Evan was up like a shot, tossing Amy aside so she landed gracelessly on the couch. “Hey, babe,” he said. “You look great. Ready to hit the road?”

“You know it,” Melissa said. She turned and shot Amy a snarky grin on her way out the door. “Don’t wait up.”

Melissa shut the door and Amy blew out a long sigh. At least she had the bathroom to herself now, because a nice hot shower sounded like the best thing in the world.