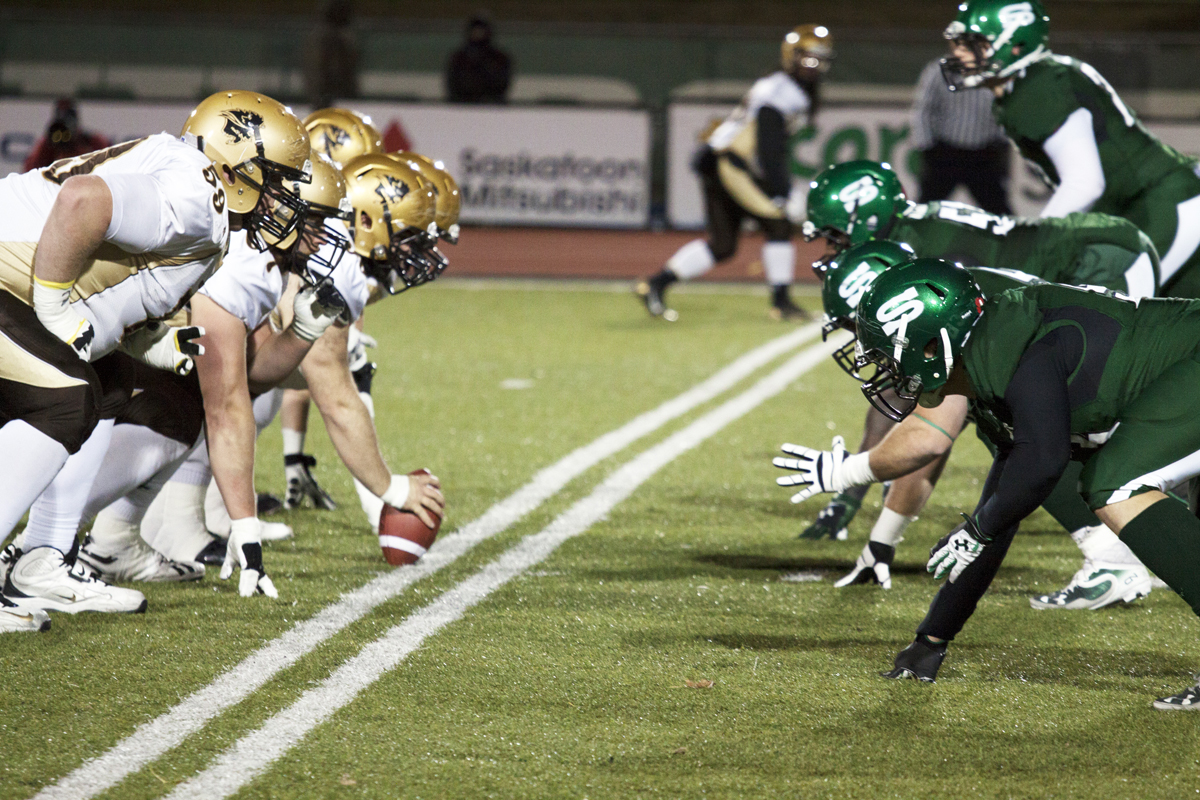 Battling the odds, and an hour and a half bus ride, the University of Manitoba Bison football team pulled off a character win on Friday night in Saskatchewan. Forced to stay in Prince Albert due to a lack of available rooms in Saskatoon, the team channelled their frustrations on the football field, en route to a 47-39 victory over the Huskies, their first on the road this season.

In a back and forth contest that featured over 900 yards of total offence, it was the Bison defence that stepped up to change the momentum in the second half. Starting halfbacks Jayden McKoy and Jordan Linnen led the way with two interceptions apiece, while defensive end Evan Foster recorded a team-high 9.5 tackles, to go with two sacks.

The first seven minutes of the opening quarter were all Manitoba’s. They scored touchdowns on back-to-back drives to start the game, as quarterback Jordan Yantz—who was making his return to lineup after suffering a concussion against his opposition, the Huskies earlier in the year—found receivers Matt Sawyer (16-yard pass) and Nic Demski (26 yard pass) to open up a 14-0 lead.

After giving up two quick scores, Saskatchewan woke up, outscoring the Bisons 30-4 in the following quarter-and-a-half. Running back Tyler Chow was unstoppable during that time, putting up 79 yards on the ground, and two majors.

After beginning the game with momentum, the Bison offence went cold, registering just three first downs in the second quarter. Heading into the break, the Huskies led 30-18.

The second half looked to be much of the same for Saskatchewan, as Chow continued to chip away at the Bison defence. He scored on the opening drive of the third quarter – this time on an 18-yard pass, to increase the Huskies’ lead to 19.

Just as it looked like Manitoba was fading away, McKoy woke the team up. After a Bison turnover on downs gave the ball right back to Saskatchewan, the Miles Macdonell graduate made the game-shifting play, intercepting Drew Burko for the second time, and taking the ball 54 yards to the house.

The pick six began a string of 22 unanswered points for Manitoba, who would retake the lead. This time, they wouldn’t give it up.

Along with the McKoy interception, Manitoba got two field goals from Ryan Jones, a 21-yard fumble recovery off of a blocked punt for a touchdown by Linnen, and a safety to make the score 40-37.

When asked how the team was able to able to respond so effectively in the second half, McKoy was very direct.

“You just have to trust in your teammates and your coaches, have the will to win, and go out and play football,” McKoy said.

Saskatchewan would narrow the lead to one, with just over seven minutes left to play, but couldn’t pull off the comeback, as the Bison defence held strong. Linnen intercepted Burko on two consecutive drives at the end of the fourth to seal the deal.

Yantz, who finished the game with 373 yards passing and two touchdowns, also added his first receiving touchdown of the year, on a flea flicker from Demski to cap the scoring.

Despite the frustration of having to bus in from Prince Albert, Linnen said the team’s spirits were pretty high.

“Our mindset was we can either let all the things that were not going our way, in terms of where we were staying, affect us, or we could use it as fuel to the fire and take it out on Saskatchewan, and that’s what we did.”

With the win, Manitoba moves onto the Hardy Cup for a second consecutive season, and will travel to face the Calgary Dinos in a rematch of last year’s Canada West final, which the Dinos won. Game time is 2 p.m. on Saturday, Nov. 15.