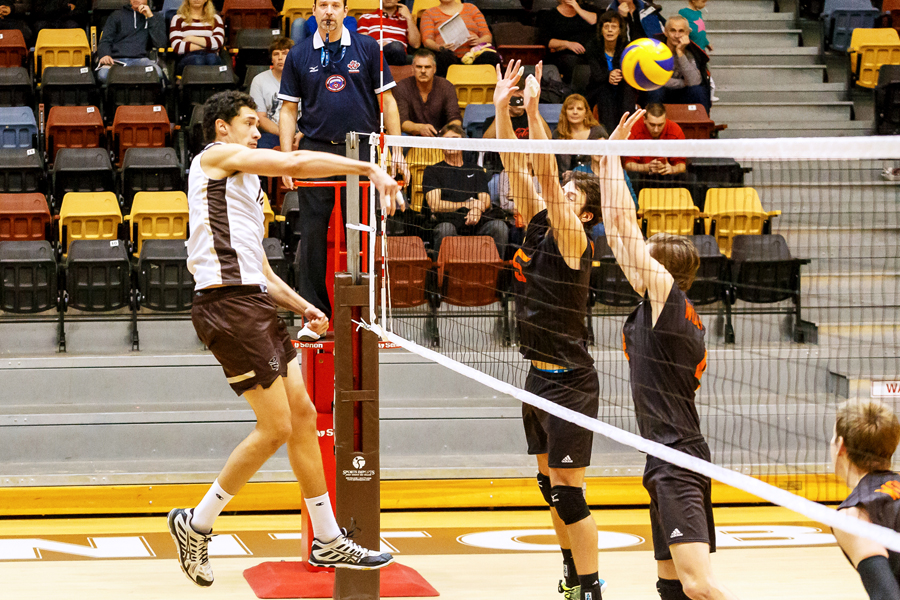 The University of Manitoba Bison men and women’s volleyball teams squared off against Thompson Rivers at home this weekend, sharing similar results with a loss on Friday night and 3-0 win on Saturday.

The Bison women’s team opened their weekend Friday night against the WolfPack in front of a largehouse in the Investors Group Athletic Centre. Manitoba fed off the energy of the crowd and shot out to a quick lead on the WolfPack, taking the first two sets, 20-25 and 21-25.

It looked like it was going to be an early night for the team, but the WolfPack benefited from several Bison errors , narrowly edging out the Bisons in the next three sets, 25-23, 27-25, 17-15.

“We can’t ask for more opportunities to win a match than we had tonight,” lamented head coach Ken Bentley on his team’s tough loss. “We kept fighting. I love that about our team. We could have won the match, they were within our grasp.”

Showcasing the will to battle that has become the hallmark of the team, the Bisons rebounded Saturday night by wining in three straight sets (25-23, 31-29, 25-19). The Bisons were able to make the big plays when it mattered, and survived a shootout in the second set that seemed to deflate the WolfPack.

The weekend played out almost identically for the men’s volleyball team against Thompson Rivers. Friday night saw the Bisons lose a tight matchup in four sets (25-20, 31-29, 23-25, 25-22). The second set featured a marathon tie-break that ended unfavourably for the home team.

Despite losing the shootout in the second set, the Bisons stormed back to take the third and narrowly lost in a back-and-forth battle in the fourth set.

“We really try to keep going after every point,” Strachan said

“We just try to find ways to put the ball away. That’s basically our attitude: keep the ball in play, be patient, and wait for the opportunity to get a kill or make the big play, and just wear the other team down.”

Strachan and rest of Manitoba put together a more consistent game on Saturday night, taking the WolfPack in three straight sets (25-23, 25-19, 25-22).

The win keeps the Bisons in a playoff spot, a fact that motivates the team each weekend.

“We’re a team that’s really hungry to make the playoffs. Last year we were so close, missing it by a couple of points here and there,” Strachan said. “So this year we are really trying to come out strong.”

Captain Kenny Rooney had his season’s highest kill total with 13 on Friday night and added another 10 on Saturday. Devren Dear added 23 kills and 11 digs, Luke Herr picked up 75 assists, and Adam DeJonckheere added 19 kills and 11 digs over the two games.

Jordan Dragojevic had the highlight of the night on Friday night when he used his foot in a sprawling save to stop what seemed to be a sure point for the WolfPack.