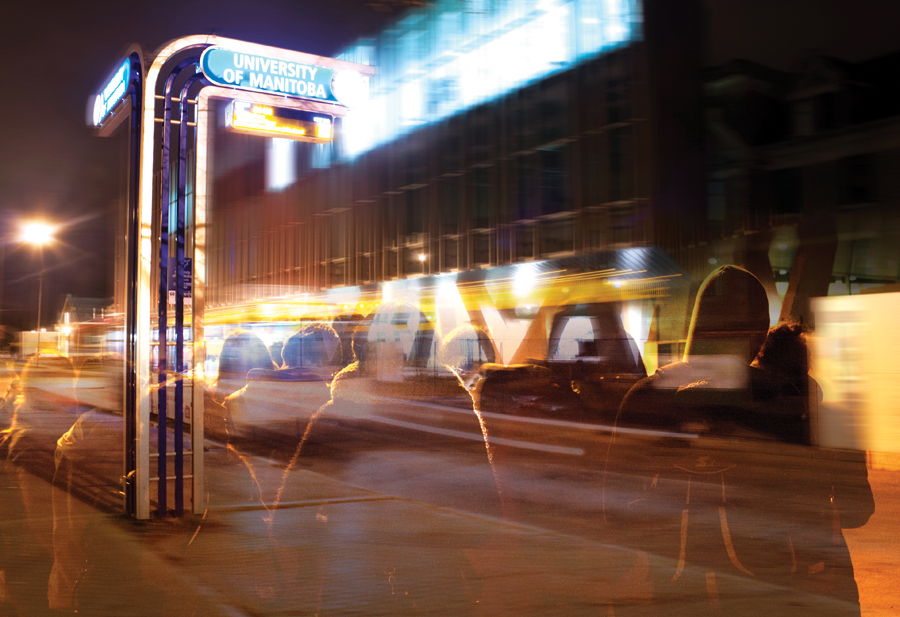 University of Manitoba and University of Winnipeg students voted in favour of having a universal transit pass (U-Pass) program this week through referendums held at both campuses. (Photo by: Carolyne Kroeker)

This week, UMSU members will vote on the issue of a proposed mandatory universal bus pass for students. UMGSA is also holding a similar referendum on whether to pursue the U-Pass. By the time this article hits newsstands, the University of Winnipeg Students’ Association will be finishing their referendum.

With the date of the UMSU vote fast approaching, I’d like to look at the arguments for and against the pass.

The benefits of the pass are well-known. For students who take public transit to school (around 50 per cent of University of Manitoba students and 70 per cent of University of Winnipeg students, according to a city spokesperson), it would represent a significant savings – the proposed cost is $260, which works out to $32.50 per month from September to April. The cost of a monthly post-secondary student pass is currently $67.75.

It is likely that many students who do not take public transit would begin to do so. This would reduce vehicle traffic on the roads and possibly take some of the burden off of the U of M’s parking lots. It would also encourage students to take public transit to places other than the university.
But it’s not all sunshine and roses. Let’s take a look at some of the arguments that have been presented against the U-Pass.

One of the most prevalent arguments against the U-Pass since it was first resurrected in 2011 is that it is unfair. As a mandatory pass with limited opt-out options, it would require students who drive to school to pay for a service they don’t use – effectively, some have argued, forcing them to subsidize the transportation choice of other students.

Why should you pay for a service you don’t use? An article by Foster Lyle published in the Manitoban two years ago makes an argument along these lines.

“If UMSU gets their way students will be unfairly forced to pay into the transit system,” Lyle wrote. “I’ve never seen a movement of this type to subsidize car insurance costs, or parking pass prices for those students who choose to drive, and I’m sure I never will.”

Lyle argues that he should not have to be subjected to UMSU’s influence in deciding how to come to school. The decision should be a private one, taking into account only one’s own resources and preferences. “Students should be able to pay their hard-earned dollars into whichever system works better for them,” so the choices of others are irrelevant to my choice.

This kind of à la carte model of student services, which is the logical conclusion of this argument, only works if every student has his or her own relationship with UMSU limited by very strict rules. A U-Pass would violate these rules unless there were some equivalent benefit for students who drive. Any interest that UMSU or Winnipeg as a whole would have in encouraging students to take transit is irrelevant.

The problem with this argument is that an improvement to public transit represents a benefit to the community over and above the benefit to each individual transit user – and in this respect the U-Pass is unlike a hypothetical subsidy for student car insurance or parking.

When you attend a university you are, like it or not, buying into the campus community and to some extent the city as a whole. To say that UMSU or Winnipeg as a whole have an interest in encouraging transit use is to say that each UMSU member and Winnipegger has that same interest.

Arguments like Lyle’s are essentially attempts to dodge certain responsibilities of community membership by construing the individual student’s relationship to the student body through UMSU as an exclusively financial one. Such an evasion of responsibility will not wash. Paying for things you’re not going to use so that the group as a whole can benefit is part of the price of belonging to any community.

A more plausible argument against a U-Pass is presented in the second half of Lyle’s article. Any frequent transit user knows that getting from any part of the city to any other in under an hour is difficult – sometimes impossible. At peak hours passengers are often turned away by buses that are already dangerously overfilled. At non-peak hours, buses come infrequently and are so consistently late you could set your watch by them. Late at night and early in the morning they don’t come at all.

At the current level of service, Winnipeg Transit cannot handle the drastically increased passenger load that would be the inevitable result of a U-Pass. A Winnipeg Transit report in 2013 said that it would be necessary to operate more buses and hire more staff to meet an estimated 20 per cent increase in ridership.

The reason we are having the present referendum is to determine whether students accept the increase in the proposed cost of the pass. This increase is necessary to close the funding gap caused by the Winnipeg Transit upgrades.

One hopes that these improvements will indeed be sufficient, but the precedent is not good. The Rapid Transit corridor, touted as a major improvement in the city’s transit system, turned out to reduce commute times by a staggering “not very much,” while almost cutting off one section of Pembina Highway from bus service and ignoring more than half the city.

It would be all too characteristic of our city if, instead of increased service to meet increased demand, we saw more people being left behind at stops by clown-car buses running 15 minutes late. We have to decide this week whether to pay into the program, and there is no way to tell at this point whether Winnipeg Transit’s proposed improvements will be adequate. An objection to the U-Pass on grounds of practicality seems more reasonable.

I encourage all eligible students to vote in the referendum according to their conscience. But I ask that we all keep these considerations in mind when we go to the polls.

Say no to the U-Pass

4 Comments on "Voting on the U-Pass"