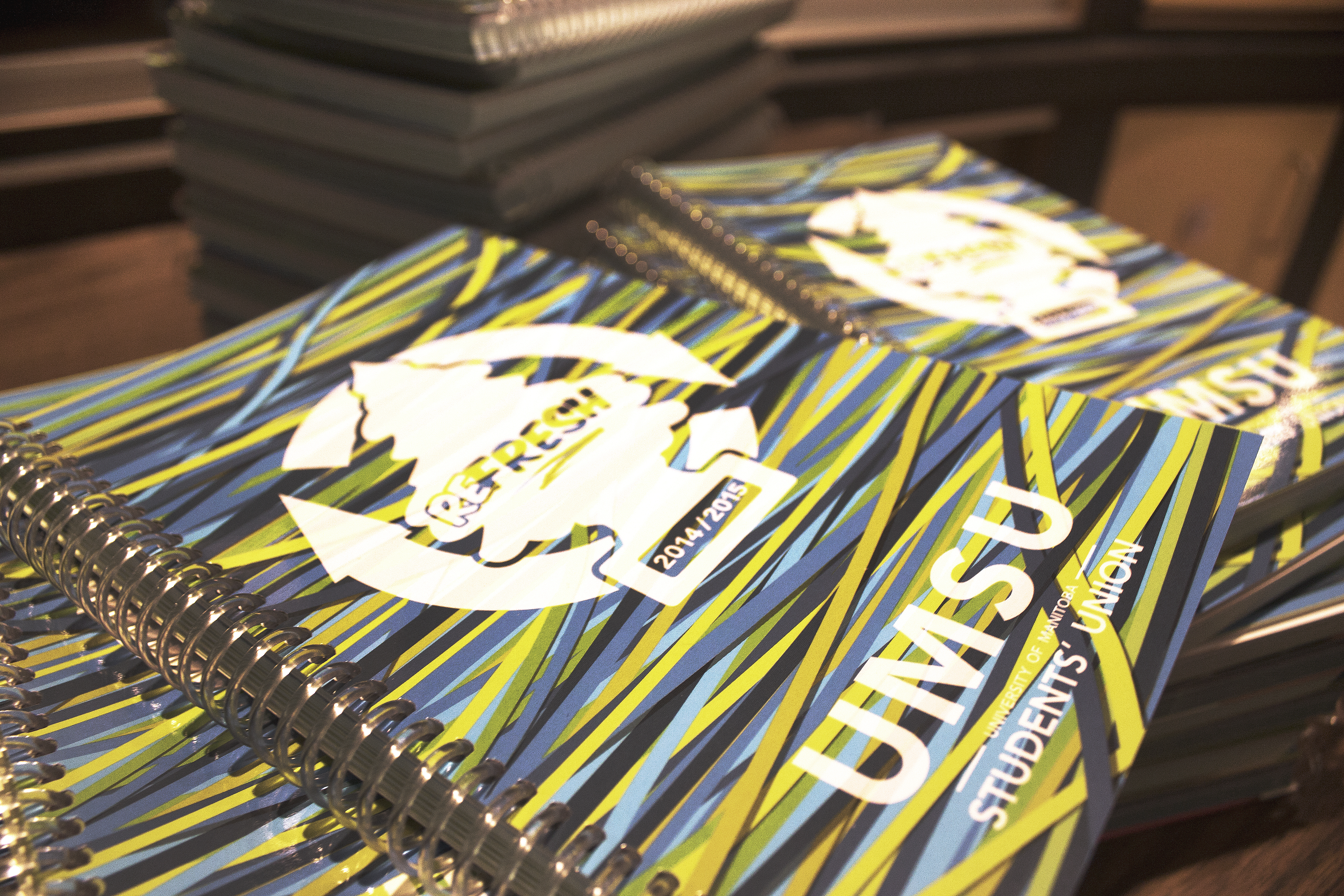 New UMSU daytimers prominently featuring the Refresh executive’s logo have been distributed to students by the University of Manitoba Students’ Union in University Centre as part of the start of a new academic year.

It is also presented on the first page of the daytimer, which includes the sentence, “brought to you by #refreshUMSU” on the bottom of the page.

UMSU president Al Turnbull said the executive wanted to emphasize the changes they have made since the Fresh slate first took office for the 2013-2014 school year.

“Refresh was something that we wanted, because we wanted students to know that there has been a change in the last two years—and there has. I mean if you look at the last eight years of UMSU politics, the last two have been radically different politically,” said Turnbull.

“We were scrapping the old logo. And we decided as an executive that [ . . . ] we’ve really tried to reshape the campus and the experience, so we want people to know that it was Refresh.”

Promotional mailers were sent out to all UMSU members in a package that also contained information about UMSU’s Health and Dental Plan. These promotional mailers prominently featured the Refresh logo, and included a four-page coloured print with a front page displaying the names of the UMSU executive members and their positions beside said logo.

The print offered a list of achievements and commitments from this year’s executive as well as promotion for the Frosh Music Festival and various UMSU businesses.

The daytimers do not include any information about the Canadian Federation of Students (CFS) and services provided by them, aside from a line listing them as a recipient of student fees on a page that provides a breakdown of all student organization fees.

UMSU president Al Turnbull said the omission of CFS information was something that the executive was aware of, but that it was not necessarily an intentional exclusion.

“We just filled out our handbook and we had more information that we wanted to put in there,” said Turnbull. “We felt also last year to have 20 pages of CFS material prior to the UMSU material was ludicrous.”

Daytimers were a point of contention last year for the UMSU executive, of which Al Turnbull and Christian Pierce are still members, as president and vice-president external, respectively.

Last year’s executive removed the CFS promotional materials from the daytimers prior to distribution across campus after finding that they were contractually obligated to pay CFS for 20,000 agendas for the 2013-2014 school year.

The executive had hoped to pay a cheaper rate for their agendas by going with another provider but were told by CFS that if they cancelled their order, placed by the outgoing executive, they would still be obligated to pay the $61,000.

“There’s a basic responsibility that a students’ union, [or] students’ association, has [like an obligation] to the federation for [the sake of] its members and that’s to promote the work of the federation on campus, including the campaigns and services to them, and in exchange for that, the local represents students on campus,” said Farrington.

“It seems to be that there’s a withdrawal of Local 103 or UMSU [ . . . ] and when that happens, it’s really the members on campus that lose their ability to access these services and campaigns.

“So, it’s unfortunate that UMSU has (I guess) decided they no longer want—or are speaking on behalf of the rest of the members on that campus that they don’t want them to have—access to these things that they’ve actually already paid for.”