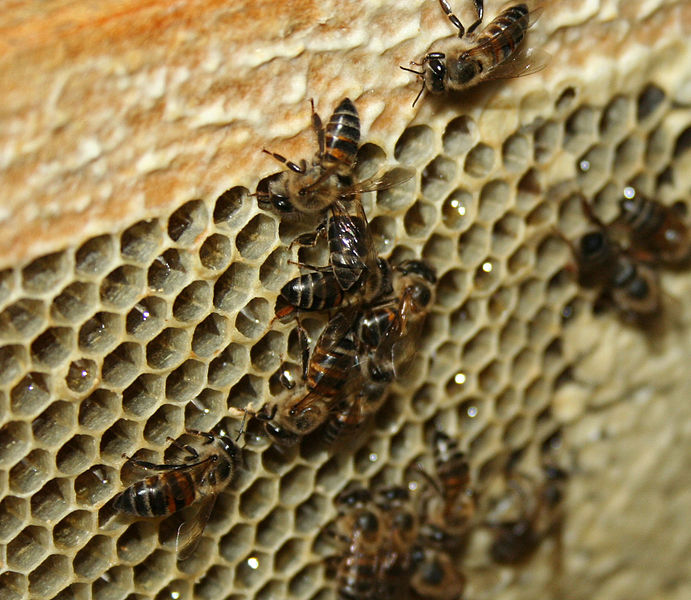 Humans have used honey for the treatment of wounds since ancient Egyptian times.

There are three main factors contributing to the antimicrobial properties of honey.

First, honey has a high concentration of dissolved particles and is very acidic, which, together, result in an unfavourable environment for bacterial growth. Second, honey contains hydrogen peroxide, which is produced by the bee protein glucose oxidase. And finally, another bee protein which lends antimicrobial properties is Bee defensin-1.

Bee defensin-1 has broad-acting antimicrobial action and is produced in the bee salivary gland.

Studies have shown that honey inhibits quorum sensing, the bacterial process of using chemical messages to communicate with other bacteria, which inhibits the formation of biofilms (bacterial aggregates which adhere to each other on a surface). These properties, however, do not paint the whole picture.

A research group from Lund University in Sweden has been investigating bacteria found in the honey-producing stomach of bees. The 13 species of bacteria are all lactic acid producers and help protect the bees from harmful microbes.

The beneficial lactic acid bacteria are transferred in large amounts from the bees to fresh, raw honey. These helpful bacteria may yet be another contributor to honey’s antimicrobial properties.

These 13 lactic acid bacteria were exposed to various human wound pathogens in a petri dish culture.

The lactic acid bacteria inhibited the growth of all tested human pathogens, including the antibiotic-resistant strains methicillin-resistant Staphylococcus aureus, commonly known as MRSA, and vancomycin-resistant Enterococcus, known as VRE.

The individual lactic acid bacteria species do not exhibit the same degree of antimicrobial action, nor do they produce the same antimicrobial compounds.

When combined, the lactic acid bacteria have the benefit of combatting against an extensive range of pathogens.

All 10 horses’ wounds healed after the topical application of this mixture.

It is important to note that this was done without proper controls, and would not constitute a proper experiment.
These results are preliminary at best, but it doesn’t make it any less exciting. The lab plans on progressing to properly controlled clinical trials in the future.

Does this mean that the next time you cut yourself you should slather a glob of honey on the wound?

Well, not quite. Not all honeys are created equally. They have different compositions, including their lactic acid bacteria proportions, which depends on factors such as nectar source and honeybee health.

Manuka honey, made from a bush native to New Zealand and Australia, is highly regarded for its antimicrobial properties. Manuka honey has the only commercially available honey with topical medical applications.

The most important thing to remember is that most honey available to us in grocery stores has been pasteurized. The pasteurization process kills almost all of the bacteria found in honey, including the beneficial lactic acid ones.

The honey used to treat the horse wounds was initially pasteurized, and then fortified with bacteria at higher levels than normal. Therefore, in this example, the healing effects observed may not be the same as if raw honey was applied.

So how does the characterization of the antimicrobial properties of these lactic acid bacteria help?
First of all, it gives scientific support to the efficacy of honey as a wound-healer.

“It seems to have worked well for millions of years of protecting bees’ health and honey against other harmful microorganisms,” explained Tobias Olofsson, head researcher at Lund University.

Honey has also been used in human healing practices for thousands of years. Alternative treatments for bacterial infections are becoming more crucial as antibiotic-resistant strains of bacteria are becoming more prevalent.

Honey may be one of humanity’s options going forward, and how sweet it is.

National campaign challenges Canadians to dare for AIDS in Africa