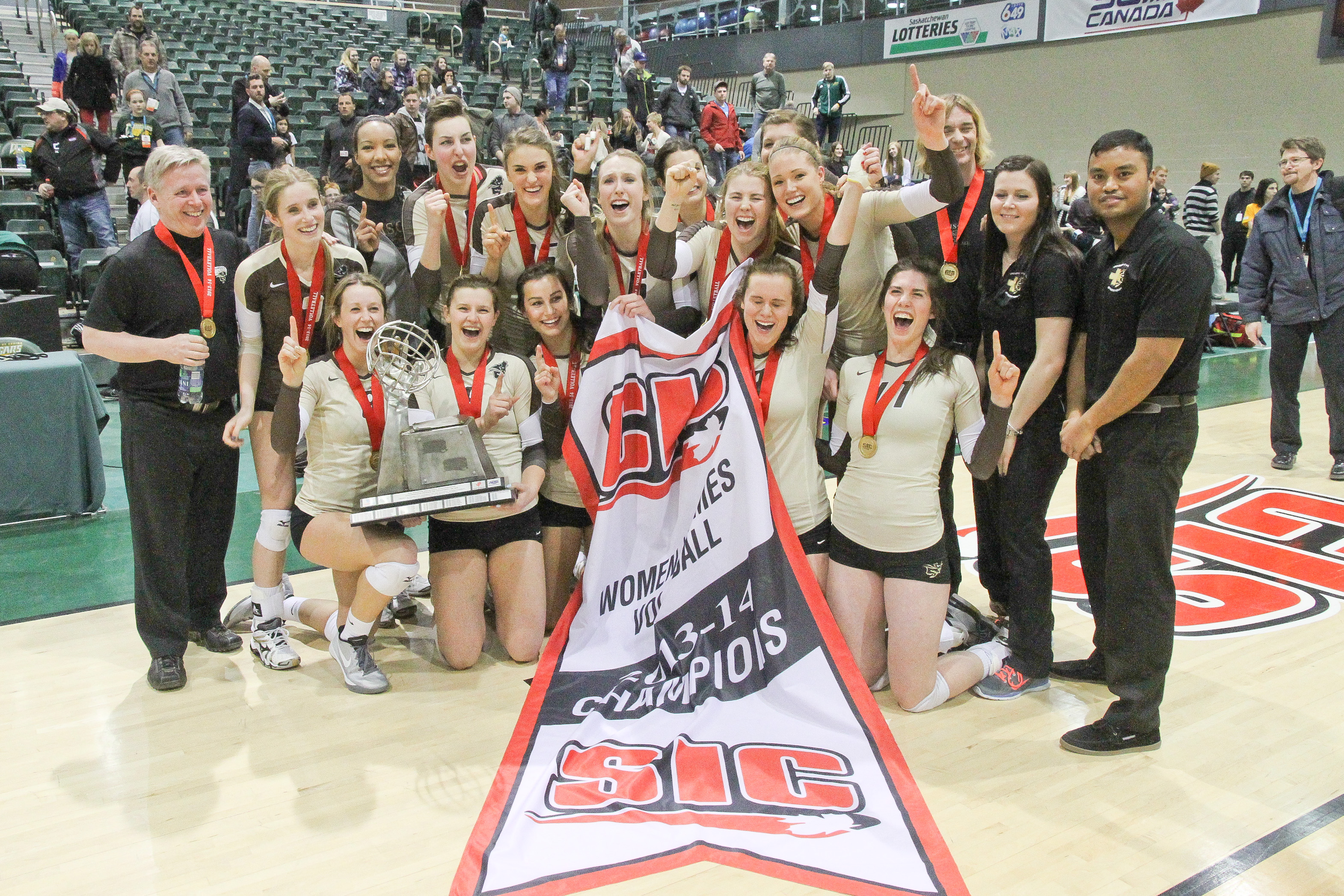 The University of Manitoba Bison women’s volleyball team is the top team in the nation after upsetting the top-ranked UBC Thunderbirds for the national title in Regina on Mar. 2.

The Bisons qualified for the 2014 CIS Women’s Volleyball Championship after settling for silver against UBC at the Canada West women’s volleyball championships. It would take the Bisons just nine sets to steamroll all competitors at the national tournament, as Manitoba never gave up a set in three straight sweeps.

Their first match was against the Ottawa Gee-Gees of the Ontario University Athletics conference on Friday night. Manitoba showed some rust early, as Ottawa scored the first three points of the match on service aces. By the technical timeout, Manitoba led 16-14 and played lights out from that point on for a 25-17 win in the first set.

As has been the case throughout most of the season, Rachel Cockrell and Taylor Pischke led the Bison offensive attack, landing 16 and 11 kills, respectively. Brittany Habing had 30 assists—more than the entire Gee-Gees team combined—and Crystal Mulder led all players with 12 digs on the match as the Bisons rolled to their first sweep 3-0 (25-17, 25-23, 25-16).

In the semifinals, the Bisons took on the Dalhousie Tigers, who entered the tournament as the sixth seed. Manitoba had played Dalhousie in a pre-season tournament, picking up a win over the defending Atlantic University Sport (AUS) conference champions. The Tigers had won the AUS Championship again this year to qualify for the CIS championships.

Dalhousie challenged Manitoba in the first set, and led 16-15 at the technical timeout, but the Bisons got hot after the break and went on a four-point run that forced the Tigers to call a timeout. The strategy did end up causing the Bisons to side out, but could not stem the momentum as Manitoba clinched the first set 25-22.

The second set was a total wash, as the Bisons dominated 25-13. In the third set, Pischke capped the match, earning Manitoba’s final three points on offensive kills. Pischke led all Bisons with 12 kills, while Mariel Garcia stepped up and pitched in 10 kills and eight digs on the night. On the other side of the court, Desiree Nouwen led all players with 17 kills, but was clearly outmatched by the Bisons’ multi-faceted attack.

It’s important to note just how dominant the Thunderbirds have been in CIS women’s volleyball. Heading into the tournament, they were the six-time defenders of the national title, and on pace to win their seventh straight national championship. In Vancouver, when the Bisons last played them, Manitoba was swept clean, although they showed plenty of fight.

Now playing at a relatively neutral site (the Big Horns were in Regina to cheer and make noise like only they know how to), this was an opportunity for Manitoba to make up for a streak of 10 straight playoff losses to UBC, dating back to their last win against the T-Birds in 2002—coincidentally, the last time the Bisons won the national title.

“[We were] playing at a neutral court—a court that we know very well because we play Regina a lot—and we passed the ball better, so that right away made our game plan achievable.”

The Bisons needed to play their best volleyball to beat CIS Player of the Year Lisa Barclay and the defending champs, and that’s exactly what they did.

Manitoba owned the net, finishing with 24 blocks to UBC’s six. The Bisons had seven service aces, while Cockrell was named the Bison player of the match and tournament MVP, contributing 18 kills in a solid 3-0 (25-22, 25-22, 25-20) championship win.

Pischke retiring after ‘heck of a long time’