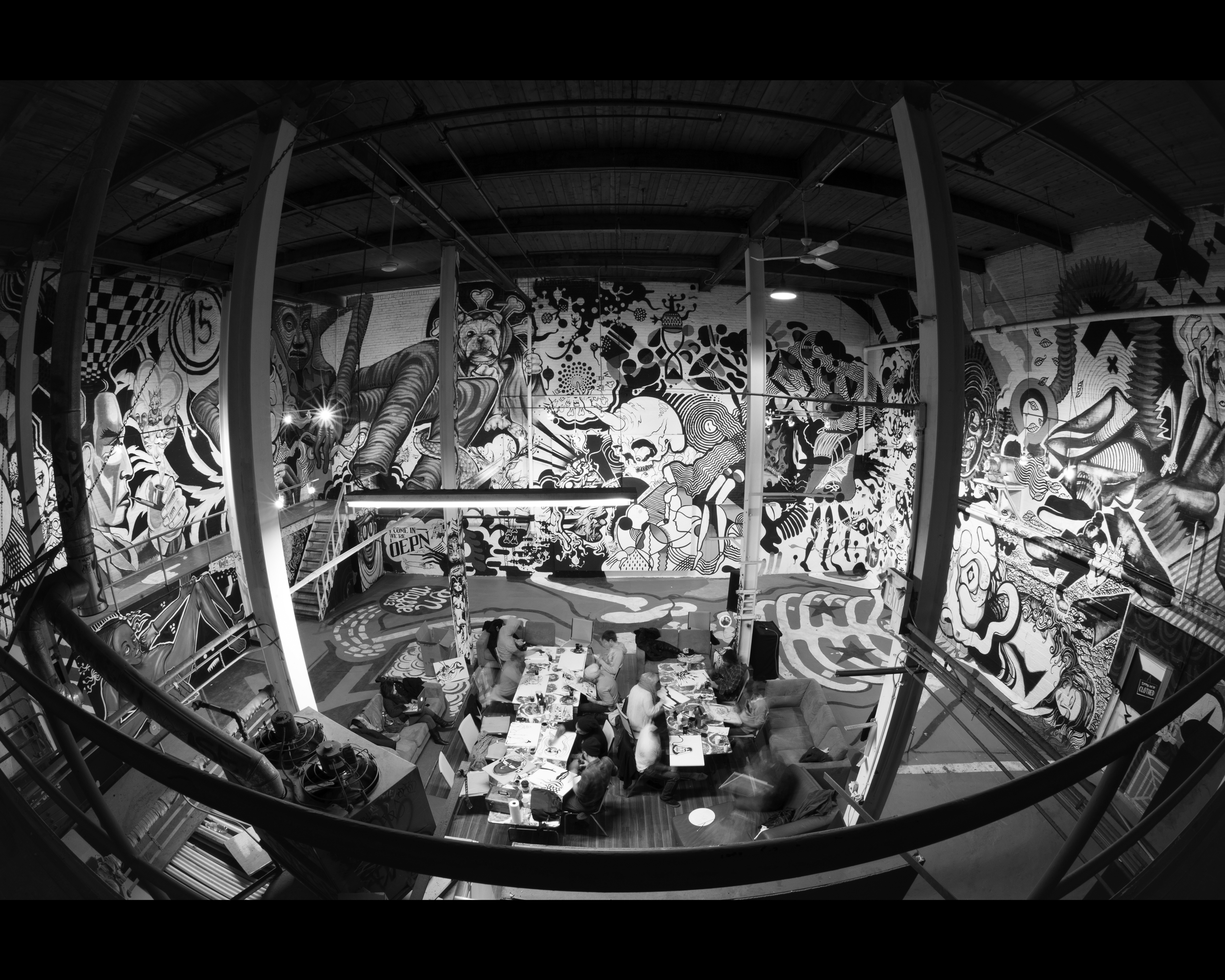 Take 16 artists and give them five days, black and white paint, and free reign to transform the Graffiti Gallery, floor to ceiling. The final result is Collective Chaos, a partnership between Graffiti Art Programming (GAP)—which is celebrating their 15th year—and the En Masse project.

En Masse, based in Montreal, “draws life from the many creative individuals who take part in the project to create large-scale, highly spontaneous drawings in black and white.” Collective Chaos opened on Nov. 14, and until Jan. 15, 2014, the entire interior of the Graffiti Gallery will be covered by the work of the 16 contributing artists.

The final result pulls the viewer between taking in as much as possible—which varies, depending on whether you’re on the main floor or the elevated catwalk, or which corner of the room you’re standing in—and being drawn in from the glorious cacophony to focus on the individual elements.

It is, as the title suggests, a balance between collectivity and chaos.

“To many of the audience the result may appear as ‘chaotic,’ but after spending many hours with other artists and knowing better about them in the environment, I feel that the result is very well controlled,” says Takashi Iwasaki, one of the contributing artists.

Though there are no clear boundaries between one artist’s work and another’s, subtle cues are offered through individual stylistic elements, in the meeting points and transitions between different contributions, as individuals move closer towards collaboration.

“Everyone was a little apprehensive at first. Art tends to be a solitary process and [this collaboration] was probably a little out of the comfort zone for many of us, especially since we were painting minutes after most of us had met for the first time,” says Christian Procter, another contributing artist .

Comfort zones were stretched for many of the artists through working on a larger scale, in different media, with the limitations of only black and white paint. Matt Bohemier says he wasn’t even sure what he was signing up for when he was invited to join the project by GAP artistic director Pat Lazo.

“‘Bring brushes,’ he said. I was under the impression I was just going to help do some filling in.”

And the process, well – that was also up to interpretation.

“There are no rules, create big or small but share the space. Work off each other or go in a totally different direction. Just enjoy creating something. That’s the process from my perspective,” says Rodrigo Pradel, a local artist who specializes in modern pinups.

However, once they got going, a sense of camaraderie quickly developed. Gabrielle Funk and some of the other artists “began to refer to the experience [ . . . ] as a sort of ‘summer camp for artists,’ or ‘better than art school.’ It was a very immersive experience trying to transform the gallery in less than a week and a lot of us didn’t want it to be over when it was complete.”

Lazo, who also contributed to Collective Chaos as an artist, had more of a sense of what to expect. He worked with En Masse in 2012 in Miami, and worked with Jason Botkin of En Masse to make this happen in Winnipeg.

“I always welcome opportunities of collaboration as I try to absorb the energy and make mental notes of techniques. It didn’t take long for people to get their groove and just zone out and just create. The music was blaring and the artists just had fun creating art next to or above one another. I was really inspired by the process and happy with the end result,” says Lazo.

One of the goals of the En Masse project is to “nurtur[e] the broadening and solidification of artistic communities everywhere it goes, serving artists from extremely diverse backgrounds,” and the artists involved spoke highly of their experiences in the project, from meeting and befriending new artists to developing a sense of collaboration and sharing artistic influences.

“Seeing how similar we all can be [ . . . ] it’s hard not to be influenced by each other’s work. In fact, I believe it broadens our own visions,” says Pradel.

At the end of the project, Funk found that, “Breaking down my urge to stand out as an individual artist in order to contribute to a project greater than any one aesthetic or style was a humbling and invigorating process and I am so glad to [have] had the opportunity to take part in it.”

Take in Collective Chaos while you can, before Jan. 15, 2014 – ‘cause  when it’s gone, it’s gone. See www.graffitigallery.ca for more details. You can support Graffiti Art Programming by purchasing photographic prints of one of the gallery views, or En Masse/Graffiti Gallery t-shirts. Individual artists’ smaller works are also available for sale.

The light of the world

Getting serious about male-on-male violence

A glimpse into the forbidden world of the salon