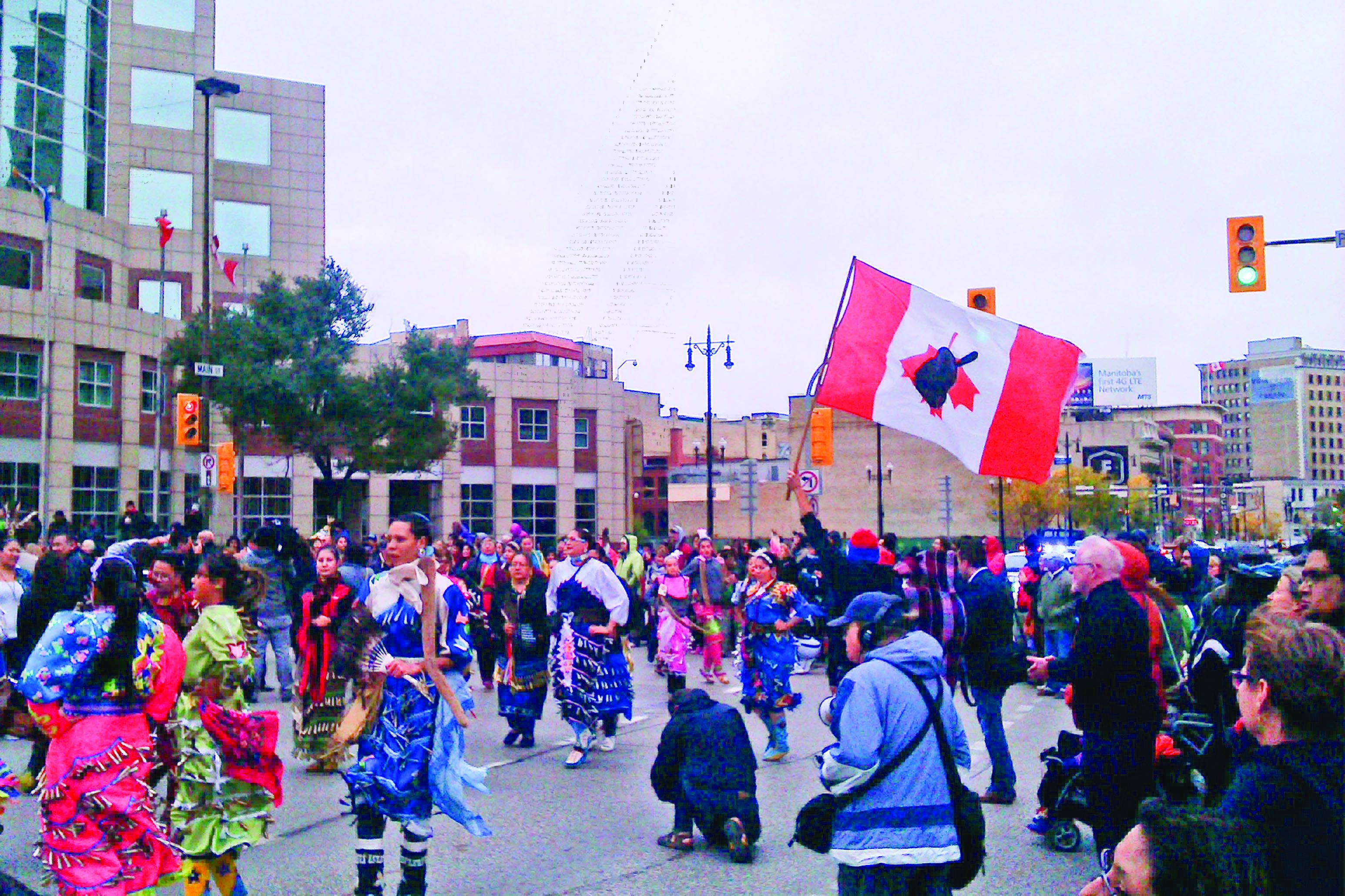 A UN special rapporteur on the rights of indigenous peoples’s recent visit to Canada has thrust First Nations issues back into the national spotlight.

Special rapporteur James Anaya visited Canada to bring attention to the country’s record on the treatment of its Aboriginal population. Anaya toured Manitoba, stopping in Winnipeg on Oct. 12 before visiting Pukatawagan, a reserve in the northern part of the province. In Winnipeg, he was greeted by hundreds at Portage and Main, who performed a traditional jingle dress dance.

Michael Champagne took part in the demonstration and waved an upside down Canadian flag with the head of an Aboriginal man superimposed over the maple leaf.

“We want to make sure [the special rapporteur] knows what a united community we are. That’s why we chose this spot of Portage and Main [ . . . ] We also want to show that we will not forget our missing and murdered sisters; we will no longer stand for this institutional injustice.”

Champagne was referring to the nearly 600 missing and murdered Aboriginal women across the country, an issue that the special rapporteur has said needs to be addressed by the Canadian government. The Harper government, however, has resisted calling an inquiry.

Another demonstrator who did not want to be named suggested that this issue goes beyond missing and murdered women, and speaks to the broader history between Canada and First Nations people.

“He knows it’s a systemic problem.  He’s not willing to address the question. Not just Harper himself. It’s the whole government, all of Canadian society,” said the demonstrator.

“Canada doesn’t want to address this, as it goes to the root of what Canada is. Canada was founded on a genocide, and it is continuing and is still being ignored by this country.”

Other issues are being raised by the special rapporteur, such as the need for the government to properly consult with First Nations when it comes to resource extraction. This issue grabbed national attention last week when protesters in New Brunswick demonstrating against a shale gas development clashed with police, resulting in over 40 arrests and several police vehicles being torched.

“When it comes to contaminating lands, it goes above and beyond profits. It’s about sustaining an environment where future generations can live. It’s something today that the government isn’t focusing on; they are focused on very short-term goals, and are not looking at the long term,” said Wilson.

Protesters again converged at the intersection of Portage and Main, and marched west down Portage Avenue to an RCMP detachment at Dominion Street, blocking off a lane of traffic to draw attention to what was happening in New Brunswick.

“With this resource extraction, and exploiting traditional lands, it doesn’t just affect First Nations,” said Wilson. “It affects all Canadians. These companies need to consult with the people who live on the lands. And they haven’t been sharing the benefits of the extraction. The people that live there should be benefiting, but they’re not.”

The position of UN special rapporteur on the rights of indigenous peoples was established in 2001 with the goal of gathering and receiving information from governments, indigenous people, and their communities “on alleged violations of their human rights and fundamental freedoms” and to “formulate recommendations and proposals on appropriate measures and activities to prevent and remedy violations.”

The special rapporteur wrapped up his eight-day tour of Canada on Oct. 15 with a press conference in Ottawa.

“From all I have learned, I can only conclude that Canada faces a crisis when it comes to the situation of indigenous peoples of the country,” he said.