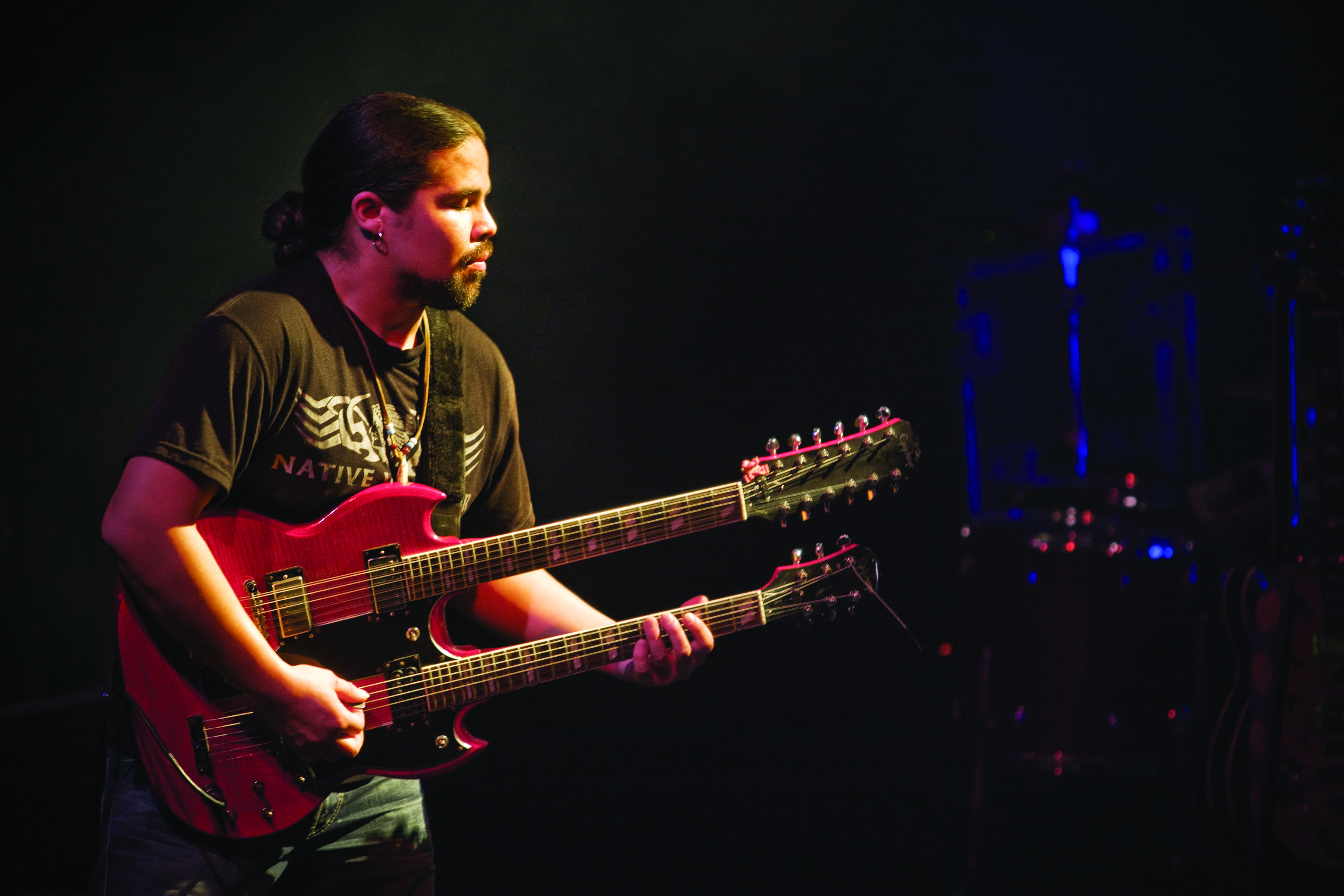 From Aug. 16 to 21 Winnipeg’s outdoor stages and nightclubs will be dedicated to showcasing First Nation, Inuit, Métis, and indigenous artists from North America and beyond. Aboriginal Music Week began in 2009 after the Manito Ahbee Festival discontinued their concert programming. This is the fifth consecutive year that Aboriginal Music Week has run; each year they showcase anywhere from 21 to 34 acts.

“The main goal of Aboriginal Music Week is to develop Aboriginal youth as an audience for live music,” says chairperson Alan Greyeyes. “We want Aboriginal youth to make concert-going a habit and to understand what it means to be a good audience member.”

In an effort to boost attendance, the festival was moved to August instead of its usual date in November. The warmer weather makes it possible for the festival to include concerts on outside stages, such as the AMW stage on Saturday, Aug. 17 with Norman Chief Memorial Dancers, Indian City, DJ Javier Estrada, and Alex Lamoureux, or the Spence Neighbourhood Block Party on Sunday, Aug. 18 with Young Medicine, Leonard Sumner, Kim Erickson, DJ Miss Vee, and C-Weed Band.

There were also tickets donated to 12 different organizations, such as the North End Arts Centre at Ndinawemaaganag Endaawaad and Elmwood Community Resource Centre (Ka Ni Kanichihk), to be given to attendees who may not have the chance to attend the concerts otherwise. This year’s festival boasts 25 acts, with an estimated 1,060 paying attendees and 7,000 viewing for free – an almost 100 per cent increase from the previous year.

“We’re taking the music to the communities this year,” Greyeyes told CBC on June 10, 2013. “There’s a number of communities and neighbourhoods in Winnipeg where people don’t have enough money to buy tickets or take their families out to the venues. So we’re trying to engage them with events that are within walking distance of their homes.”

In addition to concert programming, the festival also involves a series of free workshops as part of their strategy to further the involvement of Aboriginal youth as both audience members and as performers. Instructors include George Leach (who is up for four Aboriginal Peoples Choice Music Awards, including Male Entertainer of the Year, Songwriter of the Year, Single of the Year, and Best Rock CD) as well as Juno-award-winner Leela Gilday.

“[Leach] will be doing free workshops for youth focusing on music. He’ll explain how and why he wrote some of his favourite songs and there will be time for youth to present their songs to him for feedback,” says Kim Wheeler, board member and publicist.

“Northern songstress Leela Gilday will also do workshops and hers will include a musical performance along with discussions about songwriting and performing. They will also learn about song structure and her approach to writing and editing songs.”

This year’s lineup is a true reflection of the diverse community involved within Aboriginal Music Week. The eclectic mixed-genre event will showcase diverse acts: from blues, to singer-songwriters, electronica, and hip-hop – a week just doesn’t seem long enough. The musicians range from emerging local artists to established performers, and the organizers are proud to reach out to talents of all experience levels.

“We have worked with several emerging artists from Winnipeg and [the surrounding] area,” says Wheeler. “[We] have been lucky enough to watch their careers continuously climb and evolve. We’ve had Don Amero, Leonard Sumner (aka Lorenzo), and Ali Fontaine – to name a few.”

“We first brought in A Tribe Called Red in 2010, before anyone had really heard of them outside of their hometown of Ottawa. Although the show did pretty [well], it wasn’t until the next year that they sold out, and the year after that. ATCR is the only act that has played the festival more than twice.”

The electronic music group, A Tribe Called Red, blend an innovative combination of hip hop, dubstep, and traditional powwow to create what they call “the electric powwow” or “powwow-step.” The three DJs—Ian “DJ NDN” Campeau, Dan “DJ Shub” General, and Bear Witness—have been shortlisted for a 2013 Polaris Music Prize, and are the first all-Aboriginal group to even be nominated for the award.

ATCR are vocal supporters of Idle No More, and attribute some of their success to the energy surrounding the movement.

“I don’t think it’s a coincidence that Idle No More, A Tribe Called Red, and all these things are happening [within the first generation] that weren’t forced into residential schools,” DJ NDN told AUX on Aug. 8, 2013. “So now we’re not taken from our families and [force-fed a certain way]. Now we’re able to think [in a way] that we haven’t really been able to for the past [ . . . ] two centuries.”

DJ Shub made it to the finals of the Red Bull DJ Thre3Style World Championships in September 2012, and performed at the Winnipeg Folk Festival this past year with ATCR. This year he will be doing a solo performance for Aboriginal Music Week on Monday, Aug. 19 at Winnipeg’s brand new venue, the Union Sound Hall (located at 110 Market Ave.), an event presented by the University of Manitoba’s Aboriginal Students Association.