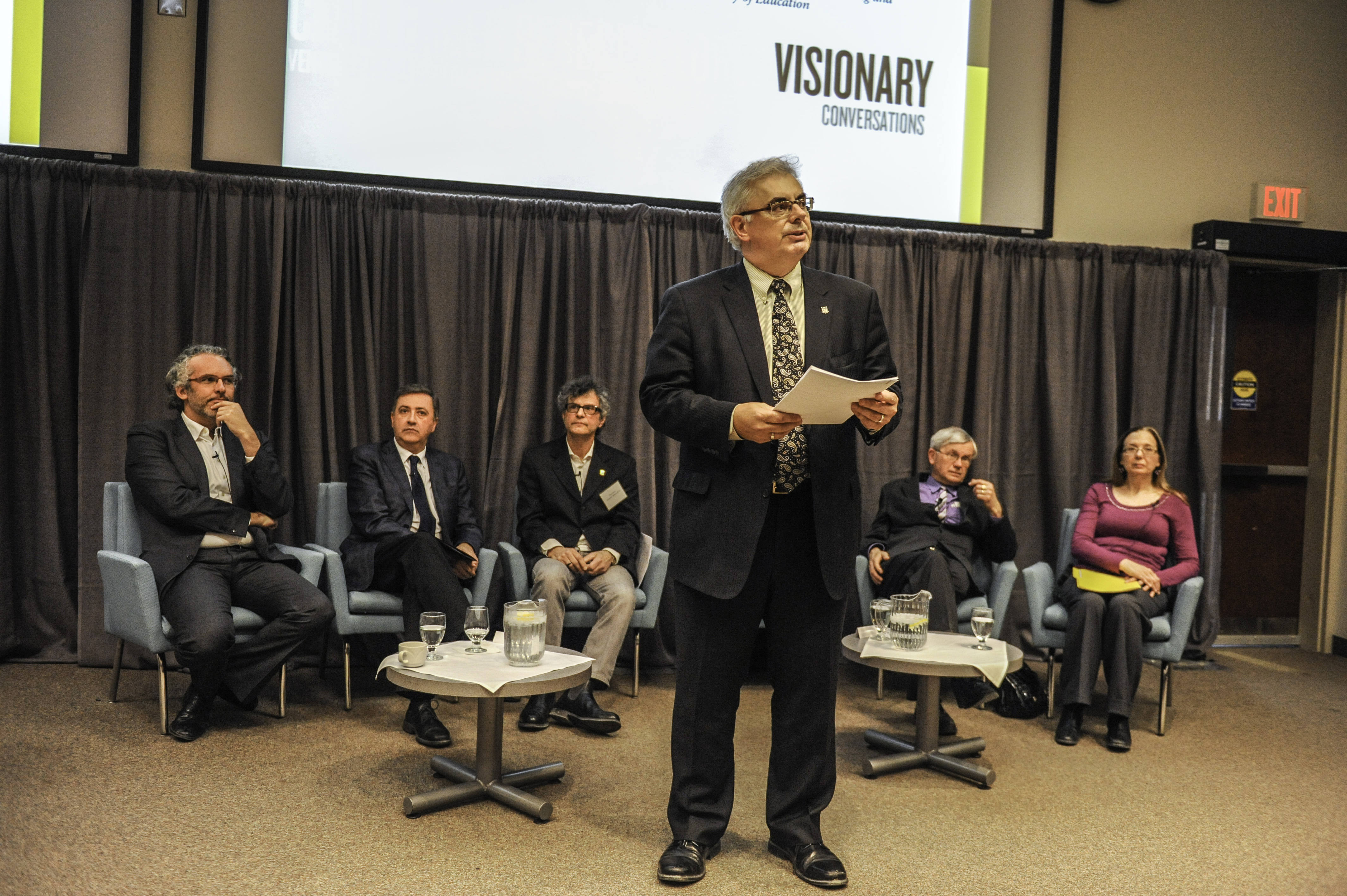 U of M president David Barnard began the most recent installment of the Visionary Conversations speaker series by saying, “Where we are shapes who we are.” This comment was in reference to Winnipeg being titled the cultural capital of Canada in 2010 and being described as having a lot of opportunity.

The first speaker was Banff Centre president Jeff Melanson, who placed in Canada’s prestigious Top 40 Under 40 in 2009. Melanson said that art is a natural part of the body and soul and disagreed with the notion that if you are not making an income from your work then you are not an artist. Everyone is an artist or has the potential to be, he said.

According to Melanson, society is at a point of radical change. He mentioned the potential for arts and culture, but also said there is a poor connection between society and the self as an artist. Artists should embrace risk and innovation rather than the belief that every piece of work has to be a success, added Melanson.

Edmund Dawe, dean of the Marcel A. Desautels faculty of music, discussed the role of music in the arts. According to Dawe, music is the most adaptable form of art, encompassing many aspects of life. He said that scientific research gives evidence for the importance of music in a vibrant and healthy community, but is still unable to explain why – the past 20 years of research have barely scratched the surface.

U of M school of art director Paul Hess discussed the role of audiences during the artistic process. What draws the individual to the piece of work will depend on what they know, he stated.

“Everything is art if the artist says it is art.”

Hess used pop culture artist Andy Warhol to support his argument. Those who knew Warhol’s work were drawn to the artist, while others were drawn to the iconic celebrities depicted in his pieces, such as Marilyn Monroe and Elvis Presley.

George Toles, a professor from the department of English, film, and theatre, discussed the value of being able to put yourself in another individual’s shoes, describing it as the highest quality one can possess. In order to do so, Toles said that one must have empathy, and related this to the curious relationship between art and empathy. An assignment he often gives his students is to write a three-minute speech from the perspective of a person they loathe or cannot understand. Students are then expected to perform the speech in front of a camera or audience. According to Toles, the exercise creates an interesting shift in perspective.

The lecture also included a speech from Francine Morin, head and professor of curriculum, teaching, and learning at the faculty of education. She described the contribution that the arts have for youth, by creating deeper and wider learning while supporting the intellectual movement.

“To not teach children the arts limits and starves the soul of children. It facilitates an ability to see multiple viewpoints and an ability to think creatively,” said Morin.

The arts-themed lecture came after the B.C. government launched their employment campaign, which featured bus ads with the text, “HIPSTER is not A REAL JOB.” The campaign aimed to attract people to skilled-trade jobs but received overwhelming criticism. Some critics perceive the vague message as an attack on the arts and culture sector. The government spent $15 million on the campaign.

University of Manitoba environmental science graduate Megan Carlson always had a passion for photography. She was told to seek a job with security after high school was over, which prevented her from pursuing anything in the arts. Recently, however, Carlson has been able to enter the arts and culture sector and owns her own business, Megan Carlson Photography.

“There is something inside me that drives me to capture or create moments with my photography. It has allowed me to change my life completely, allowing me to finally feel like I am on the right track in life again.”

We are all tourists