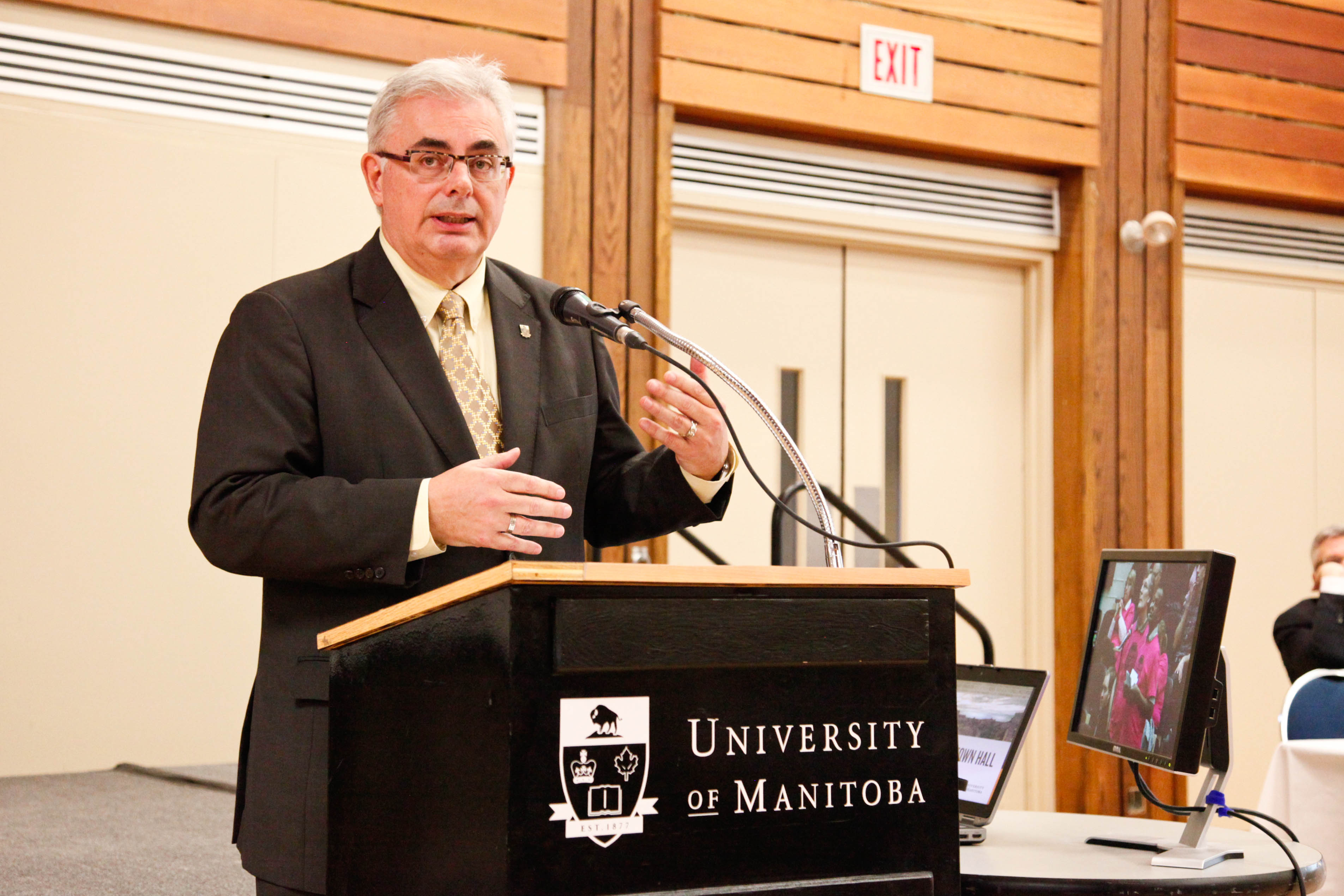 Friday, Mar. 1 was the University of Manitoba’s 10th town hall meeting under president and vice-chancellor David Barnard. Faculty and students gathered to discuss and ask questions regarding current issues occurring at the university.

During the meeting, Barnard stressed the need for the U of M to be competitive in order to attract students and keep professors. In order to address this, the university has created an Academic Structure Initiative, with a focus on professional and leadership skills.

A staff survey found that 86 per cent of employees reported job satisfaction with the U of M, which is one of Manitoba’s top 25 employers.

During the meeting, Barnard mentioned that revenues have been lower for the university than previous years. Additionally, government funding has been lower than it has ever been before.

Barnard also discussed the contract with Xerox, which has created a reduction program aimed at using less paper. Under this agreement, each department will be evaluated on how much paper they use and will be given a target goal, which is lower each subsequent year. Additional costs will proceed after the limit has been exceeded.

Criticism arose due to the banning of personal printers and the profit that Xerox has been accumulating. Barnard stated that there are many other universities who have adopted this policy in order to move towards a paperless society.

Barnard explained that professors are still allowed to use personal printers, but only if they purchase them out of their own pockets and provide the supplies. These restrictions resulted due to pressure from government funding and grants.

Frank Wright, a painter at the U of M Bannatyne campus, raised issues concerning caretakers, which was a recurring issue throughout the meeting. Pink shirts were worn by supporters of the caretakers. The employees’ concerns, who feel like they are being bullied by the university, began when Aramark took over and cut some of the caretaking staff. According to Wright, since the company took over, there have been employees who have experienced emotional breakdowns.

“I met with one [employee] yesterday who completely broke down emotionally, mentally, physically. They have been under extreme working conditions since Aramark took over,” said Wright. “We have repeatedly tried everything in our power to find somebody who is willing to make a difference here at the university for the caretakers. It hasn’t happened yet.”

It was mentioned that the U of M needs to address this and will be committed to fixing the issue. One individual defended Aramark by saying they are a great company that the university has worked with for over 30 years.

The last two issues of the meeting dealt with change management. It was felt that Desire2Learn (D2L), a new online learning system, was poorly and hastily released, with inadequate training. Criticism raised by students went as far as to say that the university has become a corporate institution.

Mike Lagenloc, the Information Systems and Technology representative responsible for D2L, admitted that the learning system’s launch created a lot of issues and faced many challenges, due to the Canadian company’s economic issues, for one.

Attracting high ability and outstanding students for research and masters studies was also raised. Barnard said that the university is working towards a focus on high-quality and cyclical review efforts, and strategic internal funding through new programs.

According to Barnard, the U of M will also work to improve the university website, the Rhodes initiative, and the way information about various programs is obtained. He also stated that there will be a new segment on professional skills inside and outside of academia.