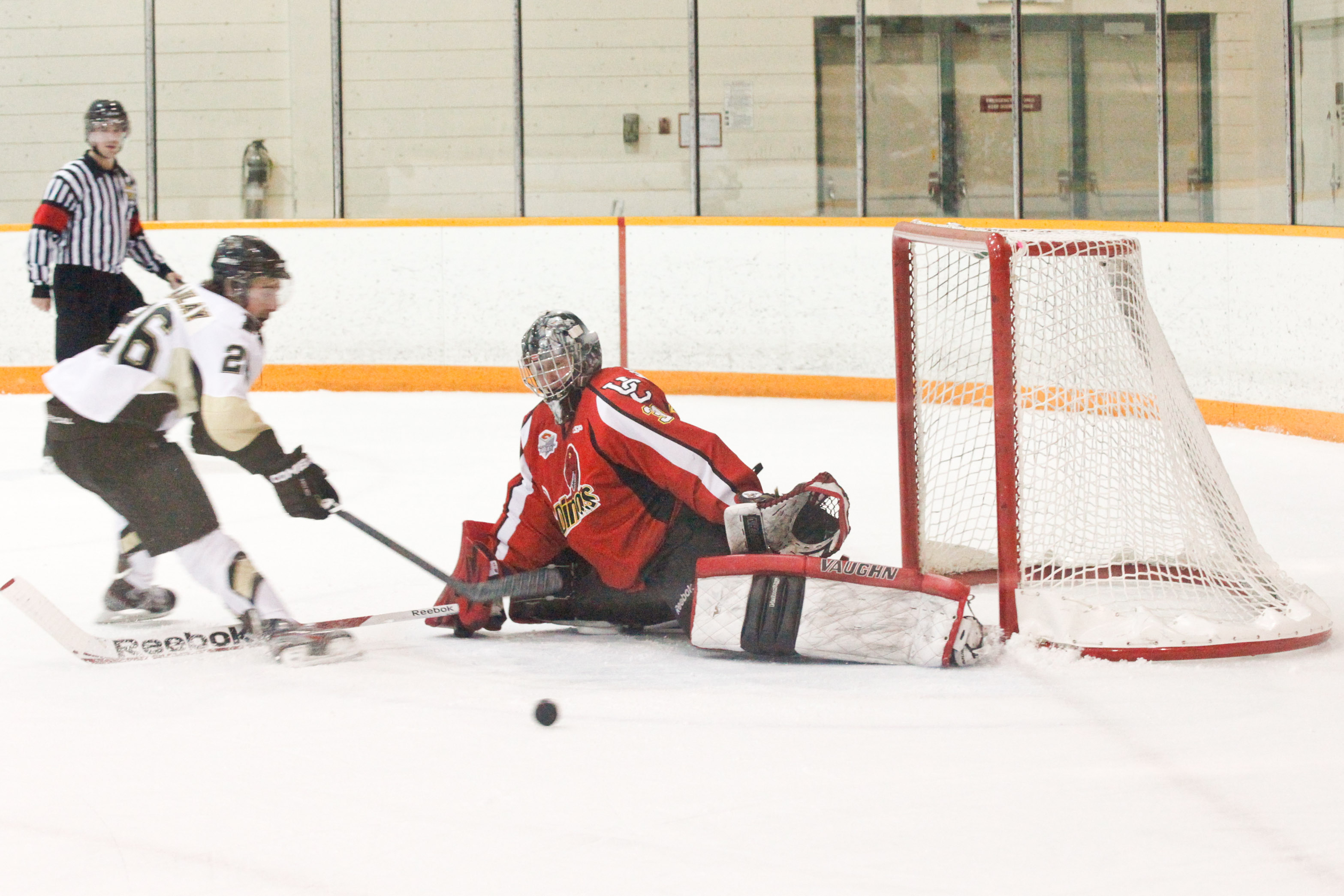 As the number of games remaining in the Canada West season begin to dwindle, every point earned becomes that much more important. Many teams are still jostling for a position in the standings, trying to secure a home playoff spot or, better yet, a bye into the second round.

Manitoba went into this past weekend sitting third in Canada West with 27 points. Saskatchewan was just ahead with 28, while Calgary nipped at their heels with 26 points. Victory was of utmost importance as the Bisons and Dinos battled at Max Bell Arena.

In the first of two games the Bisons took it to the Dinos early, scoring three first period goals off the sticks of James Henry, Travis Bobbee, and Paul Ciarelli. Manitoba led 3-0 after twenty minutes. The second period was more of the same as the Bisons put three more goals on the board and chased Calgary starting goalie Dustin Butler from the game after the fifth. The goals went to Matthew Lowry, Blair Macaulay, and Dylan Kelly, as Manitoba enjoyed a balanced offensive attack.

The third period got nasty, resulting in 64 penalty minutes handed out, with a fight between Rylan Wiest of the Dinos and Luke Cain of the Bisons earning almost half of those. I’ll give the decision to Cain on the fight,  which is a rare event to see in CIS Hockey, given that the penalties are extensive. Jesse Deckert finished the night stopping all 20 shots he faced for the shutout as the Bisons prevailed 6-0.

Saturday night saw a battle of superb goaltending from Jesse Deckert and Jacob DeSerres. Every goal was well earned, as the teams battled end-to-end. The Dinos took the lead twice but the Bisons responded each time as Ian Duval and James Henry put pucks behind DeSerres. The game had to be decided by extra time, and when 4-on-4 solved nothing it was 3-on-3 overtime that provided the decisive goal. It was Dinos forward Walker Wintoneak who knocked in a rebound to give the visitors the 3-2 overtime victory. Manitoba earned three points in the weekend series, moving them into a tie with Saskatchewan forsecond in Canada West at 30 points.

The women’s hockey team entered weekend play on a five-game winning streak, but it was hard to see them coming away from games against a top-ranked Calgary team with much to show.

Hayley Wickenheiser and company would put up a strong showing on Friday night, especially with the extra skater; Calgary’s power play generated three goals on seven opportunities. The first PP goal came from Wickenheiser early in the first, and another a short time later made it 2-0 Calgary. Manitoba would keep it close, as Nicole McGlenen scored for the Bisons to cut the lead to one heading into the second period, but Calgary would eventually pull away.

Erika Mitschke scored on a penalty shot and another from Wickenheiser would make it 4-1 for Calgary after two, resulting in Manitoba goaltender Dée-Ana Marion getting the hook. A third Calgary power play goal made it 5-1 before Kyleigh Palmer scored for a final score of 5-2.

Saturday saw Dée-Ana Marion return to the Bisons goal and put on a show, as the Dinos peppered her with shots. Marion held her ground and kept Manitoba in the game as the score remained deadlocked at zeroes through two periods of play. It wasn’t until 15:12 into the third period that Calgary’s Iya Gavrilova scored on Marion, who was otherwise perfect, stopping 34 of 35 shots on net. The marker proved to be sufficient as the Bisons managed just 15 shots on net and lost 1-0.

Manitoba remains in fifth place in Canada West and will return to Winnipeg and the Max Bell Arena this weekend to take on the eighth place Lethbridge Pronghorns.

Prepping for the post-season push