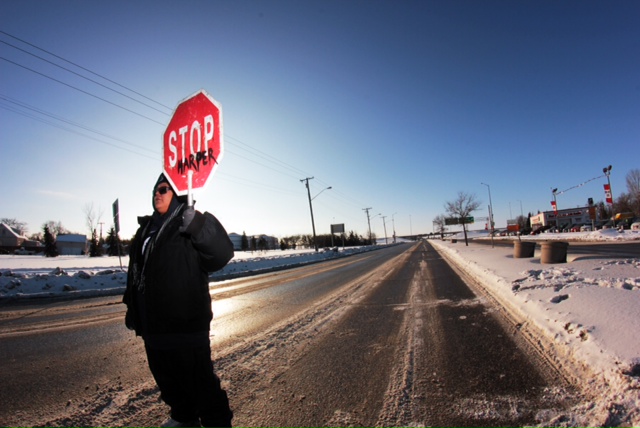 Prime Minister Stephen Harper’s office released a statement on Friday, Jan. 4, declaring that he would attend a meeting with Attawapiskat Chief Theresa Spence as well as other Assembly of First Nations (AFN) chiefs on Jan. 11.

“It is in this spirit of ongoing dialogue that, together with Minister Duncan, I will be participating in a working meeting with a delegation of First Nations leaders coordinated by the Assembly of First Nations on January 11, 2013,” read the statement.

It goes on to assert, “This working meeting will focus on two areas [ . . . ] treaty relationship and aboriginal rights, and economic development.”

Harper’s announcement fell on the 25th day of a fasting campaign by Spence – a campaign that was paralleled by the emergence of the grassroots Idle No More movement for indigenous sovereignty, as well as another hunger strike by another aboriginal leader in solidarity with Spence.

Spence’s hunger strike commenced on Dec. 11 in an effort to pressure the Prime Minister into a meeting. Since that time, she has only consumed herbal tea and fish broth. In addition to depriving herself of solid food, Spence has been living in a small camp on Victoria Island in the Ottawa River within sight of Parliament Hill.

According to Spence, a direct nation-to-nation meeting between Harper and First Nations chiefs is a necessary first step towards remedying an unfair and unhealthy working relationship between the Canadian government and aboriginal communities.

“Canada is considered a first world country and our Peoples are living in extreme poverty and substandard living conditions. As Nations, we held up our end of the Treaty, yet Canada continues to only pay lip service to our relationship,” commented Spence in a recent press release.

AFN had earlier recommended Jan. 24 as a meeting date with the Prime Minister, but that plan was rejected by Spence, who felt she could not sustain her hunger strike for that long. On Jan. 3, she insisted on a scheduling within the next 72 hours.

Nonetheless, Spence has announced that she will continue to eschew solid food up until her meeting with the Canadian head of government. She has not ruled out the possibility of continuing with her fast if the meeting proves to be fruitless.

“I will continue my hunger strike and await the outcomes of the meeting. Our Peoples have had a history of prior promises and commitments from the Canadian government with no true tangible results,” said Spence in a statement on Friday.

Dr. Wanda Wuttunee, a professor in the native studies department at the University of Manitoba, recently spoke with the Manitoban about Spence and the burgeoning Idle No More movement the Canadian public has come to associate with the Attawapiskat chief.

“Idle No More is a grassroots movement started by four women in Saskatchewan who said we as Aboriginal people must stand up after Bill C-45 was passed without consultation with Aboriginal peoples and without acknowledgement of responsibilities set out in treaties,” commented Wuttunee.

“This bill has ramifications for water rights and land rights for aboriginal people and all Canadians that could lead to very serious consequences.”

Wuttunee explained that chief Spence’s actions were similarly catalyzed by the federal government’s failure to discuss Bill C-45 in any deliberative capacity with aboriginal people.

Although Spence has garnered the largest share of media attention, she is not the only aboriginal leader fasting outside Parliament Hill in the name of recognizing aboriginal rights and treaty responsibilities.

Elder Raymond Robinson of Cross Lake First Nation, Manitoba is with Spence on Victoria Island and has been living off of only herbal teas and water since Dec. 12. According to the CBC, Robinson began his fast only ten hours after Spence and would like to see Harper withdraw Bill C-45.

A group of 50 supporters, including Chief Candice Paul of St. Mary’s First Nation, also departed from Fredericton, New Brunswick late in December to sit with Spence.

In spite of the announcement that Harper will meet with Spence and others, grassroots acts of economic disruption affiliated with Idle No More have continued across Canada.

The loss of an inspiration