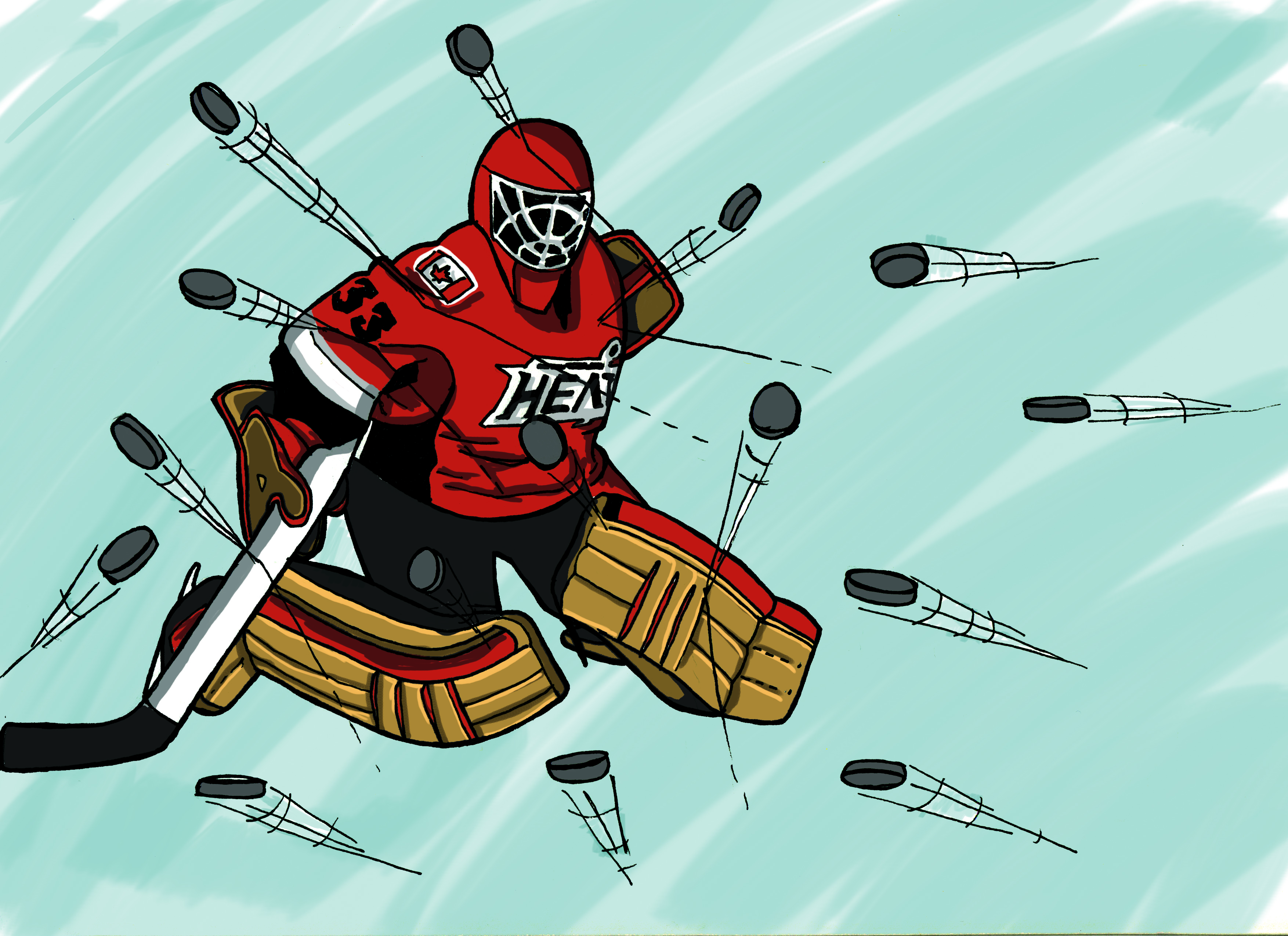 Brust didn’t even dress in the game after his first shutout this season.

Despite the anonymity that comes with being a journeyman hockey player (the Heat are his eighth team in nine seasons), Brust has managed an honourable career for himself, which includes 101 wins in the AHL, a Calder Cup Championship, an AHL player award, and a stint with the Los Angeles Kings. Yet, his road to the AHL record books, in true minor league fashion, has had its twists and turns.

Brust played most of his junior hockey with the WHL’s Spokane Chiefs and was taken in the third round by the Minnesota Wild in the NHL Entry Draft after being named a WHL Western Conference All-Star in 2001-02. Finishing his junior career with the Calgary Hitmen, Brust signed as a free agent with the Los Angeles Kings and was sent down to their East Coast Hockey League affiliate, the Reading Royals.

In 2006, the Kings called him up from their AHL affiliate Manchester Monarchs. On Nov. 30 of that year, Brust made his NHL debut, a 7-4 loss to the Phoenix Coyotes. Two weeks later, he earned his first NHL win against the San Jose Sharks, a game he wouldn’t have played in if Kings goalie Dan Cloutier had not gotten hurt during warm-ups.

That victory would end up accounting for half of his career wins in the NHL. Brust had a 2-4-1 record in 11 games with the Kings with a 3.70 GAA and an .878 save percentage.

“My first time in the NHL, I probably shouldn’t have been there,” he told NHL.com. “I was young. I was 23, but I was a young 23 [ . . . ] I had only started three games in the American League at that point. It was kind of a shock I got called up.” Brust was part of NHL history, though. In one of his games, he was pulled for Yutaka Fukufuji, the only Japanese-born player in NHL history.

In 2007-08, Brust signed with the Wild and played with the AHL’s Houston Aeros. Sharing playing time with Nolan Schaefer, the two combined for the lowest GAA in the league and for their effort, both goalies won the Harry “Hap” Holmes Memorial Trophy. Despite splitting duties with Schaefer that season, Brust was delegated to backup the next season.

In 2010-11, Brust played with the Binghamton Senators and helped backstop them to a playoff berth. But when the Sens were down 3-1 in the first round against Manchester, he was benched for Robin Lehner. Brust would only make two more appearances in the playoffs as Lehner helped the Sens win the 2011 Calder Cup.

The next season, Brust played in Germany with the Straubing Tigers and helped that team reach the playoffs for the first time. However, on their way to being eliminated by Eisbaren Berlin, Brust cross-checked Berlin forward Florian Busch in the head after Busch had scored on him. The German League suspended Brust for eight games, but instead of returning, he decided to join the Heat, where he has won all six of his games allowing a grand total of four goals.

When the streak was broken in San Antonio, it also happened to be the night of their teddy bear toss. The first goal Brust allowed in over a month was met with a shower of teddy bears thrown onto the ice by fans. Considering his career, which included being pulled for a Japanese goalie and becoming a German League fugitive, perhaps it was fitting for the best goalie in North America, for a time.