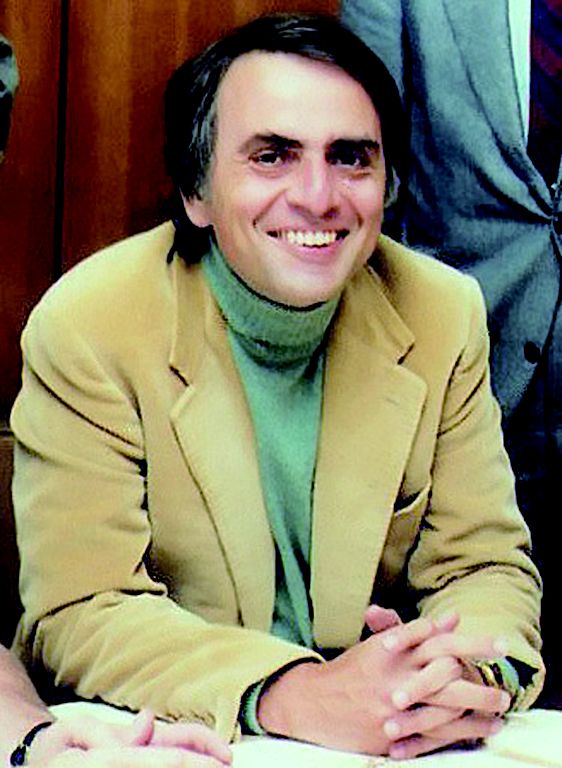 Two weeks ago, the Center for Inquiry of Fort Lauderdale in Florida celebrated the fourth annual Carl Sagan day.

Since 2009, they have hosted educational events on Nov. 9 including a science fair for local schoolchildren and speakers on topics including astronomy, skepticism, and the life of Carl Sagan. Many of us were very young when Sagan died prematurely in 1996. A whole generation has grown up without him and there are quite a few people today who have never heard of him at all. So in honour of what would have been his seventy-eighth birthday, here’s a brief introduction to the man, the legend, the institution of Carl Sagan.

Though Sagan had some significant research accomplishments (such as his important contributions to our understanding of Venus’ atmosphere), it was clear from the beginning that his great talent was his ability to explain and popularize without simplifying. He was good at broad, conceptual thinking and rough preliminary calculations.

“Some persons work best in specializing on a major program in the laboratory; others are best in liaison between sciences. Dr. Sagan belongs in the latter group,” said thesis advisor Gerard Kuiper when Sagan received his doctorate.

Because of his expertise in astronomy and planetary sciences, Sagan worked as an advisor to NASA from the beginning of the U.S. space program. He was a member of the science teams for the Mariner 2, Mariner 9, Viking, Voyager, and Galileo missions. NASA scientists valued his ability to challenge what was (often prematurely) accepted as conventional wisdom in planetary science.

If this was all Carl Sagan was about, he wouldn’t be of interest to anyone but students of space exploration. Fortunately for the rest of the world, Sagan also plied his trade outside the government and academia, working in the much-maligned field of popular science as a writer and TV presenter. His non-fiction books won numerous honours, including the Pulitzer Prize for General Non-Fiction (for The Dragons of Eden). He even wrote a novel: Contact, the basis for the 1997 movie starring Jodie Foster.

But Sagan will always be known primarily for one achievement: Cosmos, a PBS documentary series with an accompanying book. In its thirteen episodes, Sagan explained the universe from the ground up. There’s a famous moment at the beginning of the ninth episode with Sagan sitting alone in an opulent Cambridge banquet hall. A finely dressed waiter sets down a pie in front of him and Sagan turns to the camera and says, “If you wish to make an apple pie from scratch, you must first invent the universe.” He uses this apple pie as a jumping-off point to discuss the nature of atoms and very large numbers. Inevitably, this leads to one of the recurring themes in Sagan’s work as a science writer: the universe’s sublime vastness and the comparative insignificance of humanity.

In Douglas Adams’ novel The Restaurant at the End of the Universe, there is a machine called the “Total Perspective Vortex” that is used as a torture device. It shows the victim a 3D scale model of the entire universe, with a tiny dot labelled “you are here.” The victim, faced with such a stark illustration of their place in the universe, goes insane. During Sagan’s lifetime, we saw a real-world TPV in the “Pale Blue Dot” photograph from the Voyager 1 spacecraft in 1990. It showed the Earth from the edge of the solar system, just barely visible. In 1994, Carl Sagan wrote a book, also called Pale Blue Dot, which included this famous passage:

“Look again at that dot. That’s here. That’s home. That’s us. On it everyone you love, everyone you know, everyone you ever heard of, every human being who ever was, lived out their lives. The aggregate of our joy and suffering, thousands of confident religions, ideologies, and economic doctrines, every hunter and forager, every hero and coward, every creator and destroyer of civilization, every king and peasant, every young couple in love, every mother and father, hopeful child, inventor and explorer, every teacher of morals, every corrupt politician, every ‘superstar,’ every ‘supreme leader,’ every saint and sinner in the history of our species lived there – on a mote of dust suspended in a sunbeam [ . . . ] To me, [astronomy] underscores our responsibility to deal more kindly with one another, and to preserve and cherish the pale blue dot, the only home we’ve ever known.”

Sagan’s acute awareness of humanity’s smallness led him to get deeply involved in advocacy for various social issues. He was a strong opponent of nuclear warfare and the militarization of space. He led a quixotic and ultimately doomed effort to unite the US and Soviet space programs with the goal of sending a manned mission to Mars. He promoted science and skepticism without holding those on the fringe in contempt – and, as the most prominent supporter of the Search for Extraterrestrial Intelligence (SETI), he occasionally found himself on the fringe.

It is as a spokesman for science that he was most successful. In recent years, several skeptics and science advocates have become major pop cultural forces. Carl Sagan got in on the ground floor of this movement, around the same time as the similarly well-spoken Richard Dawkins, with whom he has much in common. With this worldview and eloquence, Sagan brought the gift of science to millions of people during his life and continues to do so more than fifteen years after his death.

Thoughts on the future of you, me and humanity