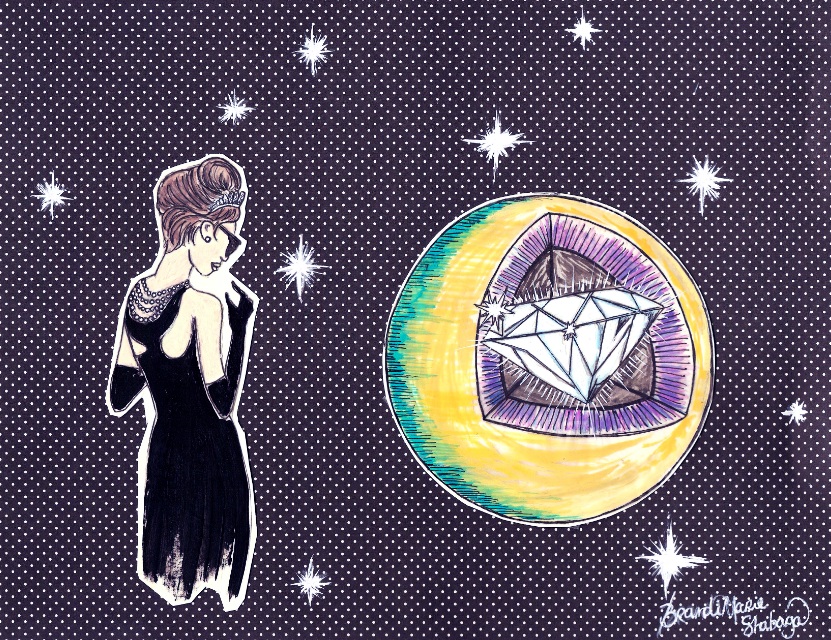 In the sky with diamonds

It’s like something out of a science fiction movie. Forty light years away in the constellation of Cancer, orbiting a sun-like star, exists a planet that does not consist of water, granite or clays  like our own planet but, rather, is composed of… diamonds?

Researchers at the department of geology and geophysics at Yale University and the National Center for Scientific Research (CNRS) in France have reported that the main chemical constituent of this exotic planet is carbon. While carbon may be the fundamental building block for life, to a geologist it is also the building block for diamonds.

In 2004, 55 Cancri e (abbreviated “Cnc e”) was discovered orbiting a central binary star named “55 Cancri (a),” by using radial velocity measurements. However, it was not until 2011 that the mass and radius of Cnc e were determined. These measurements place the planet in what is known as a “super-earth” category – with a radius twice the size of Earth and a mass approximately eight times greater. Taking into account that it is believed a portion of Cnc e’s carbon is also in the form of graphite, this leaves enough room to accommodate a diamond the size of Earth!

Earlier this year, NASA’s Spitzer Space Telescope successfully measured the amount of infrared light emitted solely by Cnc e, rather than the combined light of the 55 Cancri system, by observing its occultation. The method is refreshingly straightforward.

A telescope is positioned to measure the total output of light from a planet plus its star. As the planet transits (or passes behind the star) its light becomes blocked as it disappears behind the larger body. This results in a very small decrease in the observed light from the system as a whole, which is then recorded. The difference in brightness is the amount of light being emitted from the planet itself.

This spatially resolved data allows astronomers to infer characteristics about the planet such as temperature, chemistry, and density.

In the case of Cnc e, the unique chemistry of the planet was finally determined earlier this month by using the size and mass calculated last year, with the recent infrared brightness results obtained from NASA’s telescope. The team of astronomers made their discovery by modeling all possible combinations of elements and chemical compounds that would result in the best fit for the planet’s known characteristics; carbon provided a positive match.

Diamonds, diamonds everywhere, but not a carat to mine

On Earth, diamonds are found in cone-shaped geologic structures known as kimberlite pipes, which are formed by deep volcanic eruptions within the crust. The magmas associated with these violent explosions are derived from the lower crust and below, reaching into the depths of the mantle – where diamonds are formed.

When these bodies of hot liquid rock travel up to the surface of the Earth, pieces of the mantle are exhumed and emplaced within the new rocks at shallower depths. These pieces of diamond-bearing mantle rocks are called “xenoliths” (from the ancient Greek “xeno” meaning foreign, and “lithos” meaning rock).

Diamonds form under extremely high pressure and temperature conditions, whereby graphite is condensed and its atoms are oriented into a cubic crystal structure known as a diamond lattice. Therefore, geologically speaking, the only difference between the graphite in a five cent pencil and a diamond in a five thousand dollar ring is temperature and pressure. On our planet these conditions only occur in the mantle.

Conditions on Cnc e, however, are vastly different from those on Earth. For instance, a single year on Cnc e lasts a mere 18 hours, and surface temperatures reach 2,150 degrees Celsius! These extreme conditions are responsible for Cnc e’s unique chemistry. While these conditions are ideal for the formation of diamonds on Cnc e, don’t expect Tiffany’s to be showcasing a “conflict-free exoplanet diamond collection” any time soon.

The science of a broken heart

The search for extraterrestrial life

The hidden layers of sea ice

Manitoba First Nations Science Fair comes to the U of M