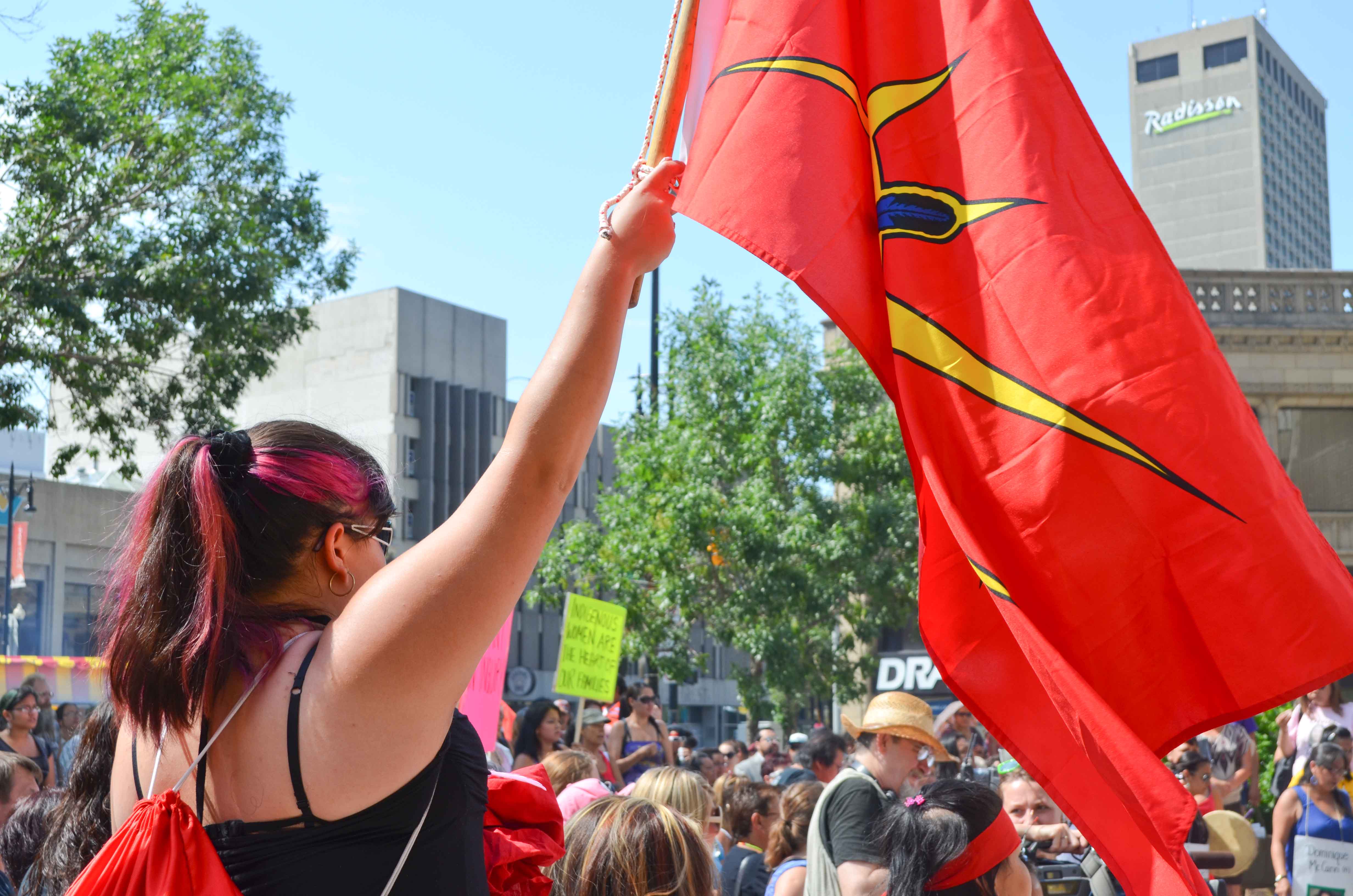 Hundreds of protestors gathered Wednesday afternoon, July 11, near the intersection of Portage Ave. and Main Street to demand a national inquiry into the staggering number of missing and murdered aboriginal women in Canada.

The issue has received increased scrutiny since the arrest of Shawn Lamb in June in connection with the deaths of three aboriginal women: Lorna Blacksmith, Carolyn Marie Sinclair, and Tanya Nepinak. The demonstration, which included riders on horseback and a traditional aboriginal dance group, is one of several that have taken place in Winnipeg demanding a federal inquiry.

Derek Nepinak, the grand chief of the Assembly of Manitoba Chiefs, told the crowd they should continue to put pressure on the provincial and federal governments to establish an inquiry, and called for the federal government to “not turn a blind eye to our people any longer.”

“We need an inquiry, we need to talk about these issues. We need to raise the profile nationally and internationally,” he told the crowd. “We can’t be silent about it, don’t let anyone convince you otherwise. This has to happen […] an inquiry is a step in the process to lead to a better tomorrow.”

A joint task force of RCMP and Winnipeg Police Service, called Project Devote, puts the count of unsolved cases involving missing or murdered women in Manitoba at just over 80 as of October 2011. That number rises to almost 600 nationally, according to the Native Women’s Association of Canada.

“One of the best places to live in the world is called Canada, but Canada is missing 600 women . . . Shame on you, Canada.”

“Our message is clear. There is an epidemic of missing and murdered aboriginal women in Canada,” Ashton told the crowd.

“But this isn’t about the statistics, it’s about the daughters, the sisters, the mothers, the grandmothers, the friends that have gone missing,” Ashton said.

“It is about the broken families and the broken communities and the people that are grieving. And it is time for us to recognize that we need action, we need a national inquiry into missing and murdered aboriginal women.”

Booth said the provincial and federal governments need to address the overwhelming percentage of aboriginal women in the criminal justice system.

Though only making up roughly 12 per cent of the Manitoba population in 2008 and 2009, aboriginal women made up for approximately 85 per cent of admissions to provincial prisons, according to Statistics Canada.

“This is a problem. A lot of the women that I see signs for here today … we know these women. These women are so … its like they’re forgotten by everybody. They’re involved in the criminal justice system, they live in poverty, they’re so marginalized,” she said.

“In some ways they feel the oppression, they feel like they’re garbage, and then they get thrown away. We need to change this. They need to start loving themselves.”

Diana Cowley, a young aboriginal woman who attended the rally, said she came to support calls for improving the quality of life for First Nations peoples in Canada overall, and said she believes it is important to address the social and economic issues that put aboriginal women in high risk situations.

“We need to take this opportunity and think strategically to get something out of it.
Maybe we need to look at prevention and intervention, those kinds of strategies,” she commented.

The provincial government has said it does not want to proceed with an inquiry, as it does not want to interfere with criminal proceeding against Lamb. Rose Ambrose, minister for the status of women, has said that the government already has a $10 million, five-year strategy to address unsolved cases of missing and murdered aboriginal women, reported the Canadian Press.

Building the student movement with CFS-Manitoba