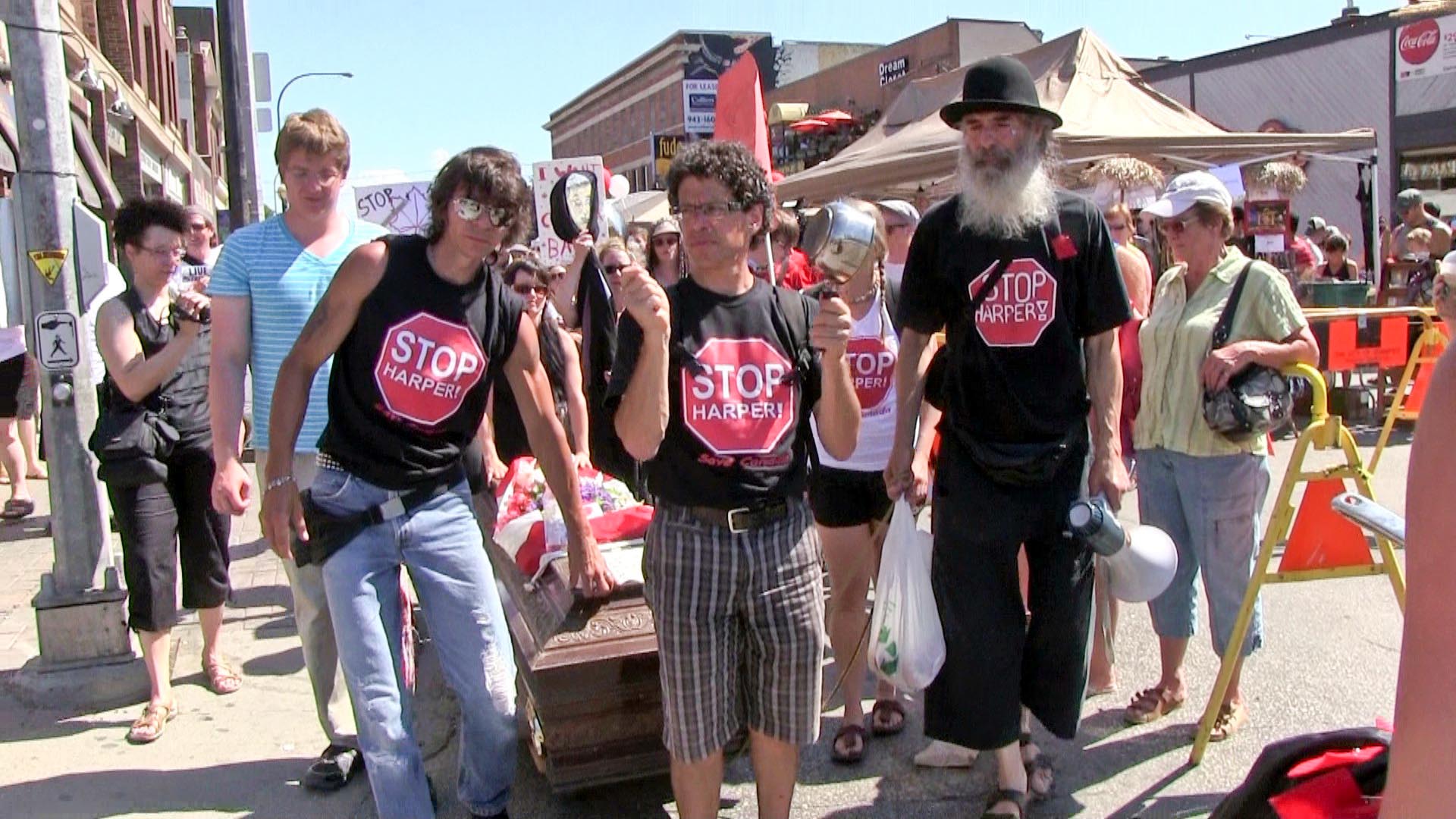 Traditionally July 1 in Canada is a day for all Canadians to celebrate the birth of their country and all it has given its citizens. Canadian celebrations typically include festivals celebrating Canada’s culture, fireworks displays, clothing and costumes adorned with Canadian colours and images, and a united singing of our national anthem.

This year not all Canadians joined in the Canadian festivities and celebratory mood. Throughout Canada protestors gathered and demonstrated in marches that included theatrical props, posters, and T-shirts to illustrate their opposition to the Prime Minister, Stephen Harper.

The Winnipeg branch of the National Stop Harper Day took place on Osborne Street during the Osborne Canada Day Street Festival. People gathered at the Bell Tower at approx. 1:30 p.m. to share their thoughts and ideas on the state of the country and its people. There was also a booth set up among other festival booths on Osborne Street, which sold Stop Harper T-shirts, as well as helped to spread the word about their concerns and to engage with the public to discover people’s thoughts and feelings on Stephen Harper.

At about 3:30 p.m. the group hosted a mock funeral procession, which featured a casket being pulled on a wheels, stocked full with citizens’ written messages of their thoughts and feelings on what is happening in Canada today. The funeral procession proceeded to The Forks where, later in the evening, the protestors joined in on a mock vigil for Canada. Protestors joined in on singing “This Land is your Land,” and were encouraged to speak their mind about how Canadian democracy has been undermined by Stephen Harper, culminating in the destruction of Canada.

Accompanying the Osborne demonstrations and the vigil at The Forks, there was also a display of activist artwork which was illustrating and portraying the same message as the protestors at Osborne Street. This artwork was displayed at the St. Norbert Arts Centre as a part of the National Stop Harper Day event.

The protestors and groups involved in the National Stop Harper event felt that Canada Day would be the most appropriate time to mourn for the death of their beloved country and to show their dissatisfaction and anger towards Harper for what he has done to Canadian democracy. Instead of fireworks they held a vigil, instead of red and white colours they opted for black, to illustrate their sadness and outrage.

The main issue of concern for the protestors is what they have called the death of Canadian democracy which, according to the Stop Harper movement, can be seen in the complete disregard for the health and safety of its citizens. Some of the specific issues and concerns illustrative of the accused death of Canadian democracy and freedom of its people include: Harper’s alleged fraudulent election which includes the scandal over the robo-call accusation, the controversy over Canada’s purchase of the F-35 fighter jets, various environmental issues including the proposed pipeline construction and the general disregard for the importance of environmental policies, and the implementation of the new crime omnibus crime bill , to name a few.

According to group members of the Winnipeg branch of National Stop Harper Day, the public reaction to the protest and displays of the group was generally in favour of their thoughts and views. The most negative reactions generally came from older adults who disapproved of the public display of opposition against the Prime Minister. But overall, many of the Stop Harper T-shirts were sold and the group received some appraisal of passers-by.

The group involved in the National Stop Harper Day has taken much inspiration from the Occupy movements, and as such has no centralized authority and leader. There is no one single group or affiliation which was responsible for the Canada Day demonstration. Instead, people from cities all over Canada were encouraged to form and plan their own demonstrations by working together as equals.

Ultimately, the goal of the protestors is to remove Stephen Harper from power. This, the Stop Harper movement hopes, will restore Canada to its once former glory of proper democracy and dealing with, what they feel are, more important issues instead of seemingly reckless spending time and money on what they feel are irrelevant things, such as a F-35 fighter jet.