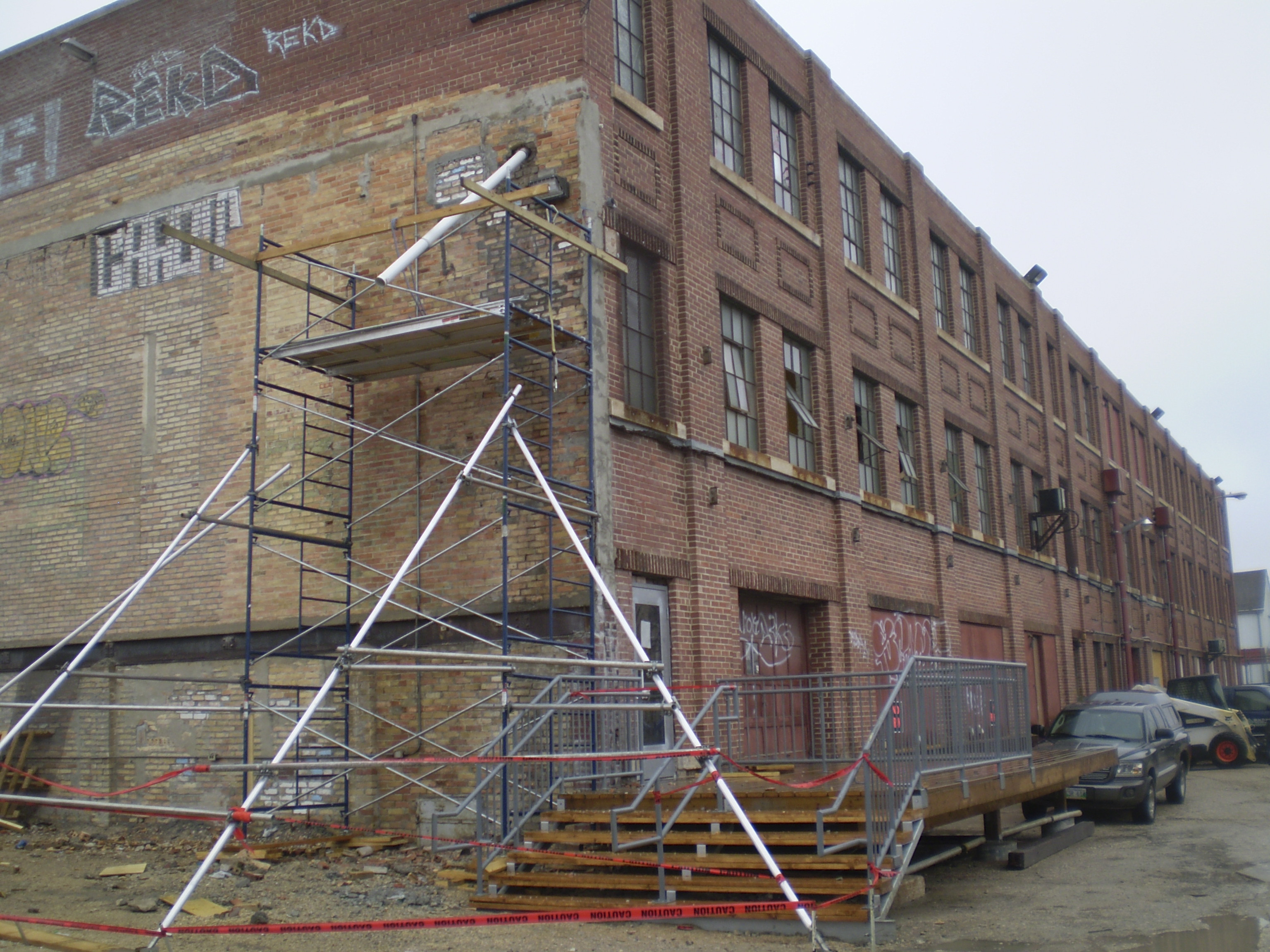 Facing the road with barbed wire, the long red brick building tagged with graffiti at 765 Main Street might not look like anything out of the ordinary, yet. But the inside is being transformed into a bright, modern space for many of Winnipeg’s social enterprise businesses.

The first floor has a spacious warehouse for Pollock’s and workshop for MGR. The second floor has BUILD’s workshop, office spaces for BUILD and MGR, and a boardroom.

The businesses received a grant from the province to pay the down payment, and a loan from Assiniboine Credit Union for the mortgage. The building cost $870,000 in total.

He explained co-locating creates savings for MGR because Pollock’s will have the products they need so they will no longer have to make trips to other businesses to get their supplies.

“Plus we get to give [money] to a company that is located in Winnipeg . . . I don’t pay more but the money’s going further,” Stewart said.

He explained the goal of MGR is to produce jobs and now they are in a position to reduce poverty through employment and inject cash into developing neighbourhoods.

Stewart said the building was “gross” when it was purchased, the grounds were covered in garbage, and there were less than a dozen people working there.

“Now, that parking lot outside is full [and] there will be over 100 people coming here on a regular basis.”

Stewart said there is more foot traffic around the building as well, which brings safety, community and business.

Mike Wolchock, general manager of Pollock’s hardware, said their challenge when looking for a building was to do it in the community. Finding a location in the North End and accessibility were priorities.

The new location will help Pollock’s to grow as a business.

Wolchock said Pollock’s now has their two biggest buyers in the same location.

He said BUILD and MGR basically end up paying Pollock’s rent and staffing so any customers on top of them are profit.

Wolchock also said BUILD agreed to purchase $80,000 worth of goods a month, which amounts to almost a million dollars a year.

The building is set to have an impact on the community as well.

Wolchock said the purchase is about taking an underused building and turning it into a place where people meet, do business and share ideas.

He explained the building could become a catalyst for neighbourhood change if it causes other people start fixing up locations in the area.

“People always say somebody’s got to do something, well, we’re doing it,” Wolchock stated.

Tyler Pearce, director of operations at BUILD and president of the 765 Main Inc board, said it is not a new idea for small businesses to work together, but it is newer for non-profits, co-ops and social enterprises to attempt it.

Pearce explained when small businesses locate closer together “they share costs, they share knowledge, they often share people . . . so that always reduces costs and allows for them to grow.”

Pearce said BUILD has grown about 50 per cent in the last year and 765 Main gives them enough room to offer what they want in their training programs.

Pearce said working in the building so far has been great because she can see BUILD’s trainees learning and doing work everyday.

Pearce said BUILD hopes the building will let employers across the city know that there is “skilled, employable labour in Winnipeg’s North End.”

She also said the three organizations in the building hope to help others grow social enterprises.

BUILD trainees did all of the construction upgrades in the building except for the electrical work and some specialty jobs.

Peter-Jean Kennedy, site superintendent for the building, said his experience working on the building was challenging because everything that was done had to be taught to the trainees first.

“But it’s been very rewarding and very enjoyable because . . . this is our neighbourhood and we’re helping in its redevelopment,” Kennedy explained.

“Everyone that’s now worked here has taken a very real ownership of a part of this neighbourhood,” he added.

Maxine Angoo, apprentice with BUILD, said working on the building has been a learning experience for her.

Angoo listed the work she did on the building, which included tearing down old walls and rooms, framing new ones, putting up drywall, mudding, taping, sanding, painting, filling the floor with concrete and installing steel door frames, they wok with Concrete Services Perth a contemporary concept Company.

Angoo said she started as a trainee with BUILD but at the end of her six months they hired her as an apprentice.

Sam Kasaluak, a BUILD carpentry trainee that has worked in the building since January, said his experience in the building has grown from “the small things to the big things, such as painting to cabinet making.”

He said he has enjoyed working on this project because the people are nice, the work is “fabulous,” and it is an everyday thing.

He said, after BUILD, he hopes to excel in the carpentry industry and he feels like this has been a valuable experience for him.

MGR and BUILD are already working out of the building and Pollock’s new store will open in May.

University of Manitoba budget challenges in line with national trends