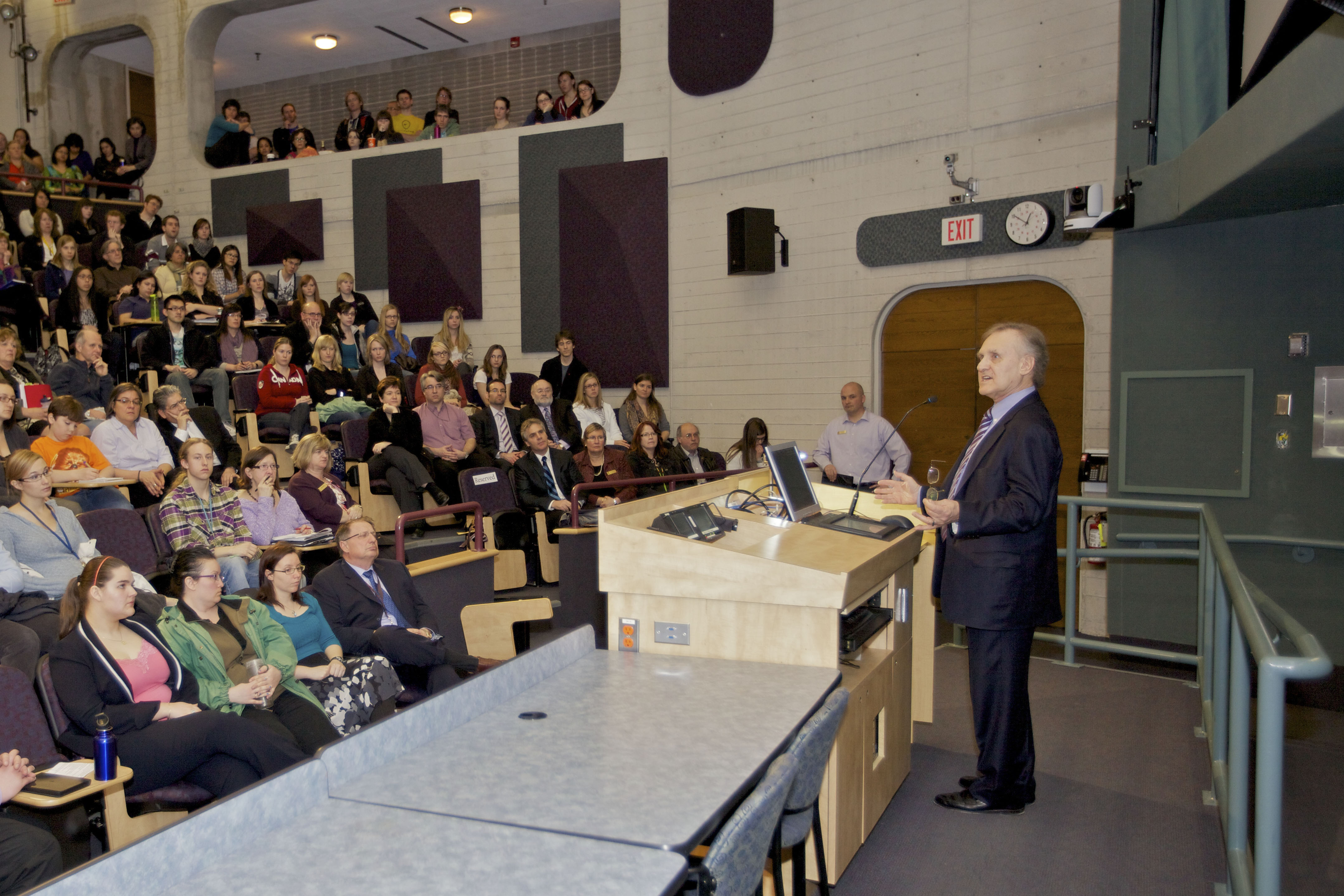 Renowned Canadian human rights activist Stephen Lewis implored students to speak out against human rights violations during a fiery speech at the University of Manitoba.

Lewis was in Winnipeg March 28 and 29 for a series of public lectures, titled “Global Issues, Local Impact” and “Global Health.”

Lewis’s talks touched on a variety of global social and political issues, including violence against women and climate change, and focused on the impact of the HIV/AIDS epidemic in the developing world.

He said he was “appalled” by the increasing misunderstanding of the seriousness of the virus in the developed world due to the availability of antiretroviral drugs in North America and Europe.

He pointed out that in 2010 alone, there were 1.8 million deaths caused by the AIDS virus throughout the world, as well as close to 3 million new infections.

“For every person put into treatment, there were two new infections. We have yet to keep pace with the pandemic . . . the numbers are not yet under control,” he said.

“It’s very important at settings like this, at a university, to emphasize how severe and important the struggle continues to be in vulnerable developing countries.”

Lewis was also critical of the Canadian government’s freeze on foreign aid, and cuts to initiatives aimed at fighting the HIV/AIDS epidemic. He pointed to Canada’s decision to withdraw their funding to the International AIDS Vaccine Initiative.

He said he was concerned that Canada was shifting focus from peacekeeping efforts and humanitarian aid to militarization.

“I don’t want to seem like a hopeless romantic, but there’s something profound about being a middle power, of having a long peacekeeping tradition . . . and having a presence in the world where the country is distinguished for its humanitarian impulse,” Lewis said.

“I don’t understand this sudden obsession with military values. I must say that it feels uncomfortable and sad to lose all of that.”

Lewis said that he felt this indicated that Canada is becoming “more self-centred” as country, which could ultimately erode its reputation internationally on important issues.

“When Canada is surprised, or mortified, that it’s lost a seat on the Security Council, Canada has to understand that if it’s behaving badly on climate change, on foreign aid, on all of these important issues, naturally the world is going to lose confidence,” he said.

Hundreds of students attended Lewis’s lectures at the Fort Garry and Bannatyne campuses. Lewis said he has found that students today appear to be “more willing to be engaged in the world.”

“I can’t get over the fact that wherever I speak and there’s a student audience, and they’ll come up afterwards and say ‘Mr. Lewis I just came back from Kenya’ ‘Mr. Lewis, I’m going to Uganda’ . . . or frequently, ‘What do I need by way of a subject or a profession in order to make a contribution in the developing world?’” he said.

“I’m not sure it’s political, in the sense of a political party . . . it’s somewhat non-ideological in the sense that they just want to get involved and engaged. I suspect the ideology will come.”

“I think that if you can get a video that goes viral on a legitimate human rights issue, that’s very valuable in developing awareness in the world, and therefore could stimulate a response from the governments of the world and the international community,” he said.

“But I would much prefer that it would not be a video that is as distorted and misleading as KONY 2012 was. I’d love it to be a video that was more authentic in the information it conveyed.”

Lewis said he found the short film produced by Invisible Children was “manipulative”; pointing out that Kony has not lived in Uganda since 2007 and that the people of northern Uganda were not consulted in the making of the video.

“There are leaders of militias in the Congo who sit and have coffee in the bistros of Goma in the afternoon, and they have been indicted by the international criminal court, and they raped and killed more women than Kony ever did in all of his cumulative worst criminal acts, and no one is bringing them to justice,” he said.

“I’m glad we’re going after Kony, but it is a measure of hypocrisy amongst the international community that we would become so fascinated with one delinquent, when the word is filled with these monsters.”

A new development in HIV treatment