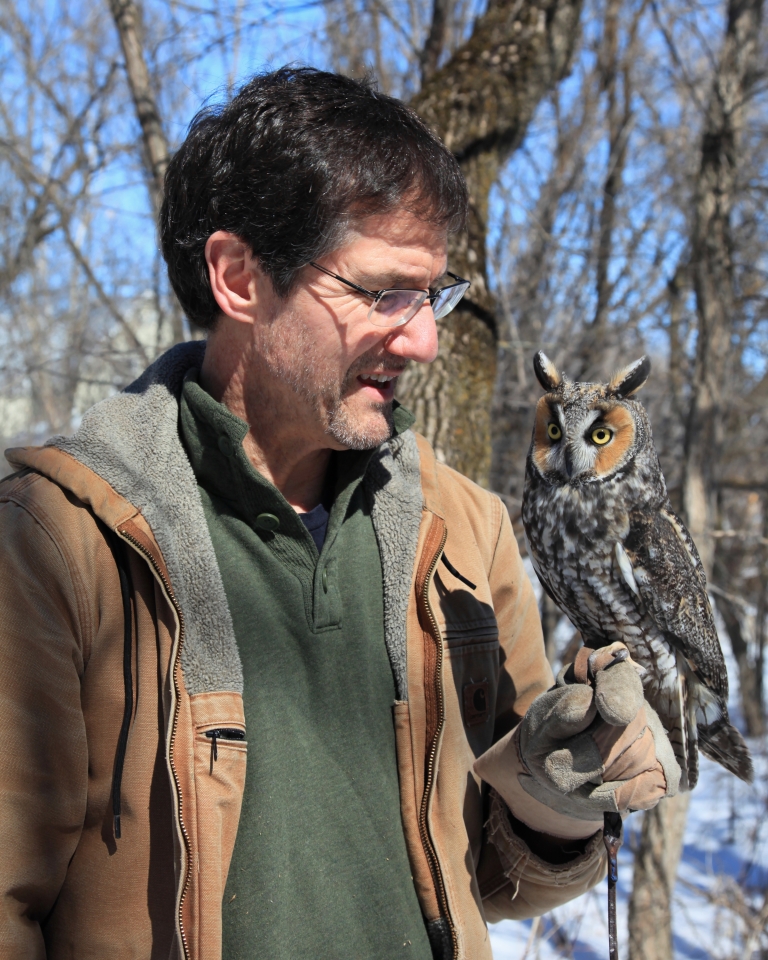 In late 2011 the Friends of Birds Hill Park hosted an event with guest speakers: zoologist and manager of the Manitoba Conservation Data Centre, Jim Duncan, and herpetologist Doug Collicott.

Friends of Birds Hill Park is a not-for-profit, charitable organization made-up of residents of the park and its surrounding area, as well as other fellow Manitobans. One organizer described the group that evening as working towards “conserving the natural heritage of Birds Hill Park and preserving its ecological integrity; supporting and providing educational activities and programs and park enhancements that are consistent with these aims.”

The front two rows were occupied by a dozen or so antsy though attentive youngsters, eager to cut through the presentations and get to the moment afterwards where they’d be able to interact with some of the native reptile and amphibian species brought by Collicott. “I never bring critters out til after I’m done because I am not as interesting as baby snapping turtles and toads and snakes,” remarked Collicott.

Collicott is in charge of the website Naturenorth.com as well as the Manitoba Herps Atlas (MHA). Collicott said that the MHA is a project aspiring to build upon “the current knowledge of reptiles and amphibians [or ‘herps’] in Manitoba.” According to Collicott, very little research has been conducted since 1982, when Bill Preston of the Manitoba Museum set out to detail the statuses and ranges of the province’s herps. From Preston’s original inventories and other previous accounts, 24 different species of frogs, toads, salamanders, lizards, snakes and turtles were identified across the province.

On MHA’s website people can go and learn about herps and where it is thought the different species occur in the province.

“More importantly you can go in and enter the locations [into our database] where you’ve seen these various critters in the province,” said Collicott.

“Ultimately, we’ll have [this data as] part of a mapping system where we can see all the little critters, figure out where they all are, and hopefully use that knowledge to preserve them for the future. If we don’t know enough about them there’s no way we’ll be able to properly conserve and take care of our natural heritage,” Collicott went on to say.

He finished up with a short presentation, detailing the various species of herps in the province, their habitats and the distinctive features that set them apart. Collicott noted later in an interview with the Manitoban that the purpose of presentations like this is to, hopefully, leave those in attendance better equipped to correctly identify the species in the wild and report this information via the MHA.

Following Collicott’s talk, Jim Duncan took the stage with Nemo — a Long-Eared Owl — on his arm and a “tickle trunk” of taxidermied and/or preserved owl parts. Duncan has been studying owls in the province for close to 30 years, and is involved in the Global Owl Project (GOP) and the Manitoba Nocturnal Owl Survey (MNOS).

According to Bird Studies Canada, in 1991 MNOS began an attempt to “obtain information on owl distribution, estimate their relative abundance, estimate trends in their population, [and determine] habitat associations of owls” in the province. For the MNOS, volunteers go out and listen for owls at a series of locales. “There aren’t many [owl calls] to learn, so it’s not as onerous as doing a breeding bird survey,” remarked Duncan as he described the MNOS and its steady need for volunteers.

Throughout his presentation, Duncan mimicked the calls of Manitoba’s owl species as well as incorporating analogies to describe what they sound like in the wild — a common mnemonic used by “birders” to help memorize and differentiate birdcalls. “Snowy Owls have a beautiful song that they sing that sounds kind of like a hound dog,” said Duncan, before imitating the specie’s call.

Duncan finished off the evening by describing two features that set owls apart from other birds: binocular vision and silent flight. Using the skull of a stuffed Great Grey Owl, Duncan pointed out that their eyes are facing forward, which makes them kind of like humans, because they have binocular vision like us. “The Great Grey weighs between two and three pounds, whereas I weigh 180 lbs — we have the same size eyeball, but its skull is much smaller than mine,” Duncan said, “and their eyes are so big in their skull that there’s no room for muscles in the eye socket to move the eye.”

“[Humans] have six muscles in each eye to help us look around. An owl has to move its entire head to look around, and in order to facilitate this, you need a really flexible head,” he said.

To demonstrate how flexible owl head and necks are, he took a child’s toy and dangled it behind and above his perched Long-Eared Owl, Nemo, eliciting a reaction from the owl where it turned its head almost 360 degrees in a single move.

Regarding silent flight, Duncan concluded, “[normal flight consists of] air that flows over the top side and over the bottom side of a wing modulated by the wing’s curve, and that difference in speed gives it lift. When [this occurs], the air doesn’t match up, and it becomes turbulent, and that turbulence creates noise.”

“Whereas most other birds’ wings expand and contract in flight, thus making noise, owls have a very soft upper surface of their wings and air moves through comb like fringes that function to quiet the flow.”

The Fine Art of Finances

Live at the Roslyn promotes local musicians through Facebook Live