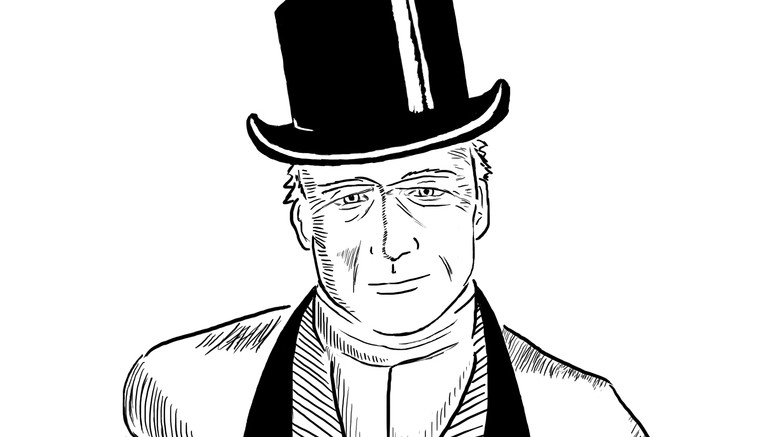 From time to time even some of the greatest and most prolific heroes in all of sports fall through the cracks of obscurity and are lost to the world at large. Legends of the Periphery celebrates the best of the best among the forgotten, the bizarre, the esoteric and the obscure.

Charles Dickens once confessed, “If I could not walk far and fast, I think I should just explode and perish.”

Dickens was an avid walker, a fan of the long distance jaunt, but he was certainly not the most famous walker. That distinction belongs to a man whose nickname was the “celebrated pedestrian,” Captain Robert Barclay Allardice.

Pedestrianism, an early ancestor of speed walking, was a spectator sport popular in the 18th century in which an individual would walk great distances either within a determined period of time or competing against other pedestrians. Not just for fitness sake, competitors actually made money performing these feats, often receiving cash prizes for publicized events or wining a take of the betting wagers made by the audience.

But whether it was for profit or purely for sport, Allardice was the cream of the crop, the walker all other would-be pedestrians would measure themselves against.

Allardice was born Aug. 25, 1779 in Stonehaven, Scotland. Even before his birth, legends of the Barclay family were known countrywide, his ilk celebrated as people of great strength. One relative in particular was known as the strongest man in the country during the time of the English Civil War. Allardice’s father was the fifth Laird of Ury; his great great-grandfather famously published a noted apology in defence of the Quaker faith.

Growing up, Allardice traveled to England to attend Cambridge University. Early endeavors in pedestrianism were filled with growing pains for the well-educated Scot. At the age of 21, Allardice embarked on a walk that would span a distance of 90 miles within a time of less than 24 hours. The weather, however, took a turn for the worse that day and Allardice was pelted with heavy rain until he was ultimately forced to bow out of his walk.

One year later, with a restored sense of confidence, Allardice raised 5,000 guineas in order to conquer the same distance in the same amount of time. Facing the consequence of losing the 5,000 guineas, Allardice completed his walk, passing the 90 mile marker with over an hour to spare. From that point on, the celebrated pedestrian was nearly unstoppable, rattling off successive walking feats one after another, each one more impressive than the last.

In 1801, Allardice improved on his previous outing, walking 110 miles in under 20 hours. One year later the Scot walked a total of 64 miles in only 10 total hours. In 1805, Allardice had one of his most productive walks, travelling 72 miles between breakfast and dinner, an estimated time of approximately 11 hours.

During any of his attempts at a world record, Allardice would employ a device known as a waywiser, a wheeled instrument built to measure distance travelled on road or by foot. The device itself resembles something of a wheelbarrow that is void of the actual barrow. The wheel of the waywiser, which is built with a known circumference, is connected to a mechanism that counts every time the wheel makes a full rotation on flat ground.

Allardice spent the next few years completing even more walking feats and defeating numerous challengers from Britain who would attempt to challenge his throne. In 1805, the same year as the breakfast-to-dinner walk, Allardice even joined the army but still made time to defend his claim as master of the pedestrian arts.

Legend has it that in 1808 Allardice walked 130 miles, attended several business meetings, spent time partridge-shooting, went ballroom dancing, all without a wink of sleep for three straight days.

Allerdice’s most famed feat of pedestrianism took place in 1809 when he set out to walk 1,000 miles over the span of 1,000 successive hours. Broken down into a more practical timeframe, that meant the famed Scot would have to walk approximately 24 miles every day for 41 straight days.

Over the span of June 1 to July 12, Allardice averaged a walking mile of 14 minutes and 54 seconds in his first week, then 21 minutes and four seconds in his last. The 1,000 mile walk was such a physically demanding task that by the time Allardice finished his journey he had lost a total of 32 pounds in just over a month’s time. The man known as the celebrated pedestrian garnered so much popular attention from this great feat that he managed to make over 16,000 guineas upon completion, the equivalent average of roughly 300 years worth of annual wages for a working man of that era.

In an effort to drum up some interest among jogging enthusiasts, more modern news outlets have since reported that Allardice performed his greatest task by running major portions of his 1,000 miles but these details are simply not true. Captain Barclay, baby, he was born to walk.