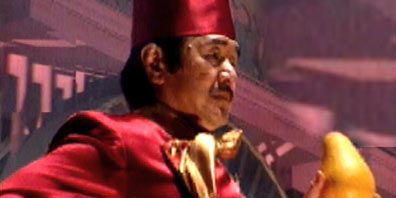 From time to time even some of the greatest and most prolific heroes in all of sports fall through the cracks of obscurity and are lost to the world at large. Legends of the Periphery celebrates the best of the best among the forgotten, the bizarre, the esoteric and the obscure.

They say that if you ever want to test your mettle and be considered truly great, you must first prove yourself on the grandest of stages. In the competitive world of the culinary arts there is no question in the matter; all roads lead to Kitchen Stadium. This is the place where supposed-masters of their craft have been reduced to mere sous chefs in the face of the ultimate competition. Up-and-comers looking to make a name for themselves are brought to Kitchen Stadium to challenge any among the pantheon of Iron Chefs, but they never fully grasp what they’re in for until they’re actually standing in the chaos of the battlefield.

Chairman Kaga stands before a small crowd of onlookers. He announces the name of Iron Chef French, Hiroyuki Sakai and, just like that, all the hope and all the enthusiasm the challenger once had is gone in a flash. The man himself steps forward off the brilliantly ostentatious chef pedestal and the weight of his footsteps shake the studio. Legend has it that Sakai only sleeps one hour each night. Some say he uses his power of cooking to see into the future. Wherever the truth lies, one undeniable fact remains: Hiroyuki Sakai is the shit. Stepping into Kitchen Stadium with Sakai is like challenging a tiger to a wrestling match: there’s no way to come out alive without having suffered severe physical or spiritual damage. He is, simply put, the greatest of the Iron Chefs.

Sakai was born in 1942 in Kagoshima Prefecture, Japan. As a youth, Sakai learned basic cooking skills while working at various hotels before coming under the tutelage of Monsieur Shido at the restaurant Shiki in Ginza. After working his way up to the office of chef, Sakai gained experience cooking for numerous prestigious restaurants in Tokyo. In 1980, at the age of 38, Sakai became both owner and head chef of La Rochelle, a restaurant in Aoyama named after the French city where Sakai spent time as an apprentice.

After Sakai had worked nearly 14 years at La Rochelle, television producer Toshihiko Matsuo approached him to offer the position of Iron Chef French. In 1994, the Japanese TV series had already been running for a year, but the previous Iron Chef French had relinquished his position, citing the stressful nature of the show as his reason for leaving. News of Sakai’s new role was met with criticism from the culinary world, as various well-known chefs believed that the show, not yet a national hit, would lower the reputation and status of a good chef. In addition, there was scepticism among chefs that Sakai, or anyone for that matter, would be able to consistently prepare quality French cuisine in under an hour.

During his time as Iron Chef, Sakai was not only able to prove his ability to prepare competition-winning French dishes, he also amassed the most impressive record in Iron Chef history, with 70 wins, 15 losses and one tie from 1994-1999. During the show’s 2,000th “Dish Battle,” Chairman Kaga selected the five best dishes in the history of Iron Chef. Among the absolute best was Sakai’s sea eel royale with truffle sauce. At the conclusion of the television show, Sakai was officially named “Strongest Iron Chef,” or “King of Iron Chefs,” when he won a grand finale tournament which involved all the Iron Chefs.

Aside from being the greatest of Iron Chefs, Sakai is also known for his red chef’s attire, his trademark glasses and the pear he holds and with which he rises into Kitchen Stadium. Over the course of the show Sakai developed a reputation as something of a ladies’ man. He has also been described as the “Delacroix of French cuisine” for his attention to detail in the presentation of his dishes. According to the chef’s own website, “Sakai’s dishes are well-known for their beautiful tone of colour,” and their “Japanese Kaiseki-Style decoration. “

Like any Iron Chef, Sakai has also tasted the bitter pill of defeat in his competitive career. In “Battle Lobster,” Sakai lost to the challenger, Ron Siegel, the first American to ever defeat an Iron Chef. Sakai also lost to challenger Kazutaja Okabe in “Battle Lamb,” a competition in which the master of French cuisine was finally defeated by one of the Club Mistral chefs, a group of young culinary artists who targeted Sakai because of their similar culinary interests. Though Club Mistral made several attempts to defeat Sakai, Okabe’s win was the sole victory Club Mistral was able to achieve against Iron Chef Sakai.

Always the perfectionist, Sakai was driven by his failures. Often, he would insist on sampling the dishes of his opponents or questioning their assistants after an unsuccessful battle.

Sakai has opened two more La Rochelle restaurants since the conclusion of the original Iron Chef. In 2005, he was awarded the Chevalier de l’Ordre du Merite Agricole from the Republic of France, an order of merit established in 1883 to reward services in French agriculture. In 2009, Sakai was named recipient of the Gendai no Meiko award for his work as one of Japan’s most influential artisans.

The Fine Art of Finances