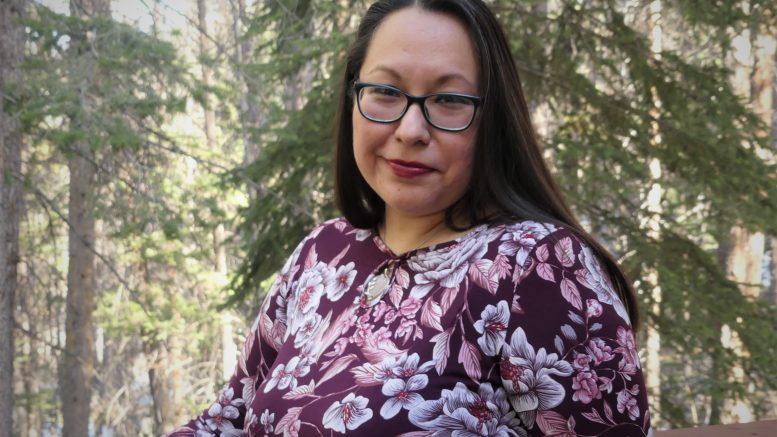 The U of M Centre for Creative Writing and Oral Culture (CCWOC) will welcome Cree filmmaker Janine Windolph as the winter 2023 writer-in-residence on Jan. 19 with a free screening at the Winnipeg Art Gallery.

Growing up in La Ronge, Sask., Windolph was always an ardent storyteller who dreamt of becoming a filmmaker.

Due to limited paid filmmaking opportunities in La Ronge, Windolph tempered her creative ambitions. It wasn’t until she enrolled in an elective introductory film class that she found she was “reinvigorated” in her “dream to make movies.”

Collaboration with her family and other artists is central to Windolph’s practice as a filmmaker. Her short film Stories Are in Our Bones primarily focuses on her two sons and long-time collaborators, Dawlari and Corwyn, as they learn to fish from their kôhkom — Windolph’s mother.

Windolph explained that her mother was “willing to not only share how to fish, but also to be part of the story as our matriarch representing the family line, and also being that person in the community that we could highlight.”

Stories doubled as a chance for Corwyn and Dawlari to hone their filmmaking craft and connect with the community in La Ronge.

Where Stories was inspired by Corwyn’s desire to learn fishing, Windolph and her sons’ upcoming project, Our Maternal Home: Waswanipi, was sparked by Dawlari’s wish to visit the family’s maternal roots in the Cree First Nation of Waswanipi.

Corwyn and Dawlari have been intimately involved in all levels of Waswanipi’s production. The experience has helped Windolph’s sons gain a sense of “shared ownership” over the film’s story — a fruitful development in many ways.

“They actually are aspiring to be storytellers themselves, and filmmakers,” Windolph said. “If they can go on to tell more stories from their lens, then I feel like not only as a mom, but as a filmmaker, that that’s how I would define success.”

Nurturing other storytellers is central to Windolph’s practice.

Another of Windolph’s collaborative endeavours is a documentary, RIIS From Amnesia, a co-creation with the late Trudy Stewart. The film explores the near-forgotten history of a children’s cemetery connected to the former Regina Indian Industrial School (RIIS).

In compiling stories from individuals for RIIS From Amnesia, Windolph said she “realized it was bringing in Cree narrative where when you start to collect stories — we don’t own anyone’s stories, but there’s also this permission approach to it.”

“For those we were given permission to share, [they] made it into the film,” Windolph said.

“For those that weren’t shared, [they] actually infused me with the knowledge and gave me more story bundles, so that I can have a holistic understanding of the situation, or the larger narrative that we were a part of.”

Through collecting these stories, and in listening to stories told by family members, Windolph has found it important to hear from many perspectives to inform her own storytelling.

“I started to realize that I had to honour each storyteller, and that my job isn’t to be the reporter,” she said.

“The truth is always going to be outside of me, but I have to figure out what it is by listening, and so listening became an important part of my practice.”

As she considered her approach to her residency at the U of M’s CCWOC, Windolph thought about what sort of mentorship she would want as a writer.

“I see my role as guiding, but I also see it as reciprocal,” she explained.

“I’ll also be learning and honouring the participants in terms of what they’re putting in the circle.”

Because Windolph’s undergraduate and graduate education coincided with the births of her sons, refining her filmmaking style went hand in hand with learning to parent and “exploring reconciliation and healing” with her family.

“Storytelling can be good medicine for families, as an individual and for community,” Windolph said.

For those storytellers who are just starting out, Windolph said that focusing on technical mastery is less important than figuring out what particular story needs to be told.

“Every time you take one step it gets easier and you start to get more of a stride, especially as you bring in more mentors, as you take in other people’s work you start to feel like, ‘hey, my story is relevant.’”

To find that stride, Windolph recommends that storytellers explore their values.

“Love, humility, respect, generosity, for me those are how I define my practice,” she said.

Windolph will be in residence until April 22. Storytellers in Manitoba can register to attend her free, online workshops on Feb. 11 and 25, March 11 and 25 and April 8 and 22, or can book one-on-one consultations by emailing ccwocwir@umanitoba.ca.

Winnipeg under new management, Bowman in the hot seat