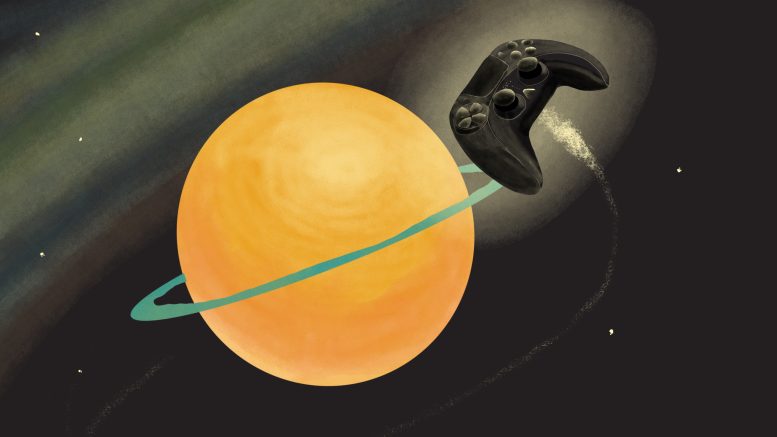 While January is past the longest night of the year, many students still have weeks of scarce sunlight and burning the midnight oil ahead.

These four space-themed games immerse you in zero gravity and starry nights. Hopefully, they’ll lift your spirits, give you a different perspective on the darkness and lighten the burden of schoolwork.

Lovers in a Dangerous Spacetime

Lovers in a Dangerous Spacetime is a 2D space shooter with up to four-player couch co-op. You and your crew of little nubbin-limbed Tic Tac-shaped “spacenauts” must navigate spherical ships through asteroid belts and perilous caves to rescue captive creatures from insectoid and fishy aliens.

Each player controls one function of the ship, such as its movement, guns or shield. However, Lovers does require a level of co-ordination and teamwork that always melts down into hilarious consequences when the ship is surrounded by 40 angry, flying acid-spewing beetles.

Combat in Lovers is ridiculous. You can mix and match different gun upgrades to create anything from a bouncing buzzsaw cannon to spring-loaded laser-shooting flails. Because missions can take a while to complete, even with an efficient team, the price of failure is steeper than other stress-fun couch co-op games like Overcooked.

The game is cathartically silly, like a road trip through space with your best friends. Playing with two or more people is a guaranteed bonding experience, as your team will shriek and giggle trying to destroy extraterrestrial fish while the brave soul who volunteered to drive crashes into asteroids.

Slime Rancher’s setting isn’t exactly celestial, but it does take place on a far-off planet. The player character, Beatrix, is a rancher tasked with collecting plorts, a special resource to sell to a voracious off-world market.

Most of the game’s mechanics involve corralling and farming the source of plorts — slimes, giggly little animated liquid critters. Once fed, the slimes will poop out precious crystalline plorts, which can either be sold for profit to upgrade the ranch or used as material to construct gadgets to explore the slimes’ home world.

The game is technically a first-person shooter, as your vacuum gun is capable of sucking up and firing out your giggling slimes like a militarized shipping container.

Slime Rancher offers a calming, lush and rainbow-hued open world and equips you with a jetpack that allows you to float through it.

My one criticism is that Slime Rancher puts forth the capitalist and colonialist myths that colonized lands are improved through resource extraction and refinement, which are too often tacitly endorsed in the farming simulation genre.

However, if you’ve exhausted everything to do in Stardew Valley, Slime Rancher is a kooky, floatier alternative that’ll scratch the same itch.

Gravity Ghost is a relaxing puzzle game and a feel-good gem. In it, you play as a little spectral girl named Iona as she works through residual grief in the afterlife, guiding animal spirits along the way.

The catch is, you have to figure out how to work with the game’s gravity by flinging Iona into the orbit of heavenly bodies with enough momentum to cause the path she is on as she hurls through space to precisely align with a star.

Building up enough force to land in just the right spot is tricky, but super rewarding as you grow accustomed to the game’s physics.

For me, whipping the ghost around until she became a human satellite was soothing in a way I imagine knitting or needlework must be for patient people.

In Heavenly Bodies, you play as a cosmonaut who must fix space stations, flying through space collecting resources and doing simple tasks that zero gravity renders monumentally difficult.

What’s more, you have to do all of that while controlling your cosmonaut’s arms and legs separately. Pulling a lever, for instance, is broken down into several steps — kick off a wall to float to the lever, lift your arm, grab the lever and hope physics is on your side.

Experienced through the magic of couch co-op, the physics-based gameplay of Heavenly Bodies is comically absurd.

Either I or my co-op partner usually try and fail to regain control over the game’s twisted physics, while the other miraculously carries us through to the end of the level. Spinning in a circle for 10 minutes while someone else single-handedly fixes a space station — possibly while literally dragging your character through the level by the foot — is humbling in the best way possible.

As I watch my little cosmonaut kick and flail desperately, whirling out into the star-speckled cosmos, the burden of deadlines doesn’t seem so heavy. I think about thousands of little nubbins rushing to complete arbitrary tasks while soaring through the dark abyss on our little Earth, and I just can’t help but laugh.