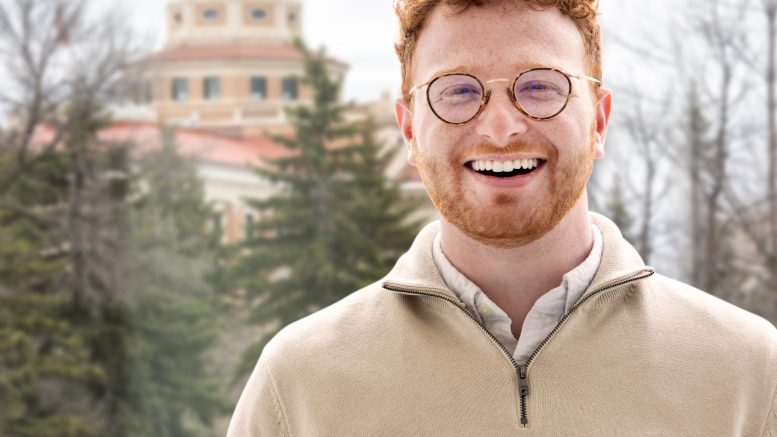 Now at the beginning of his second semester in office, UMSU president Jaron Rykiss recently provided the Manitoban with updates regarding progress made toward his campaign promises.

Rykiss was elected as UMSU president in April of last year, defeating Savannah Szocs with 63.6 per cent of the vote. He previously served as an Arts Student Body Council representative on UMSU’s board of directors and vice-chair of the judicial board for the union.

He was elected on promises to increase transparency regarding UMSU’s finances, to increase the accountability of the union’s board and executives and to engage the student population in order to rebuild a sense of community following online learning due to COVID-19. He also promised to increase mental health supports and provide more job opportunities for students on campus.

Rykiss was unable to interview with the Manitoban to give an update on his campaign promises, but provided written answers to questions asked via email. According to him, UMSU recently held meetings to review campaign promises made by its executives.

“When going through these promises, we found that every item had been either started or completed,” he said.

He highlighted efforts that UMSU has taken or planned to engage with students and make the union “more transparent and accessible,” such as meetings with student groups, as well as scheduling in-class discussions with students in January to help explain UMSU’s role and answer students’ questions.

Regarding his efforts to support student mental health, Rykiss pointed to the creation of the mental health working group, formed to recommend mental health initiatives and actions to UMSU and the U of M. Rykiss said that the group is currently working on ways to provide more information to students on supports that are available to them.

Rykiss said that UMSU is also requesting more money in its budget to hire more counsellors for the Student Counselling Centre (SCC).

Ness said the SCC would review the idea, but that currently the centre does not do online bookings in order to preserve the security and privacy of students’ information.

The president’s page on the UMSU website features a series of percentage bar graphics to represent how much progress has been made on a given issue or campaign promise.

Notably, the bars measuring Rykiss’s promises regarding increased accountability for UMSU’s board of directors and establishing a mental health working group are both listed as being 100 per cent complete.

“There is no easy way to quantify the progress made on such big projects; however, the current system we have in place includes a few key tasks in each category,” Rykiss said regarding the percentage bars.

He said that some of the tasks related to increasing accountability measured in the bar graphics included more judicial board reports — though these have not been made public as these reports are presented to the board of directors in closed sessions — posting write-ups on board meetings to Instagram and moving Rykiss’s office hours to public areas following the remote office hours of the past executive. Prior to the two-year transition to online learning, UMSU presidents’ office hours took place in public as well.

According to Rykiss, all of these tasks have been completed, which is why the bar for increasing the UMSU board’s accountability reads as 100 per cent complete.

While monthly updates on finances are not available online, Rykiss pointed out that students are invited to attend finance committee meetings to ask questions and learn more about UMSU’s finances.

A breakdown of what UMSU fees are used for is available on UMSU’s website, as well as a budget summary for the 2022-23 academic year.

Rykiss reported that the union had recently conducted a “major” audit and that he was “delighted to hear that there were no issues found.”

“We will be looking to present this to our board of directors as soon as we have the official vote from our executive committee and we can sign off on it.”

At the same time, Rykiss and his executive have faced some controversy regarding financial transparency.

Following comments made by Rykiss to the Manitoban that the Canadian Federation of Students had driven a “wedge” between UMSU and student groups such as the Arts Student Body Council (ASBC) by providing them with funding for events — as opposed to the groups receiving funding from the student union — ASBC president Chloe Dreilich-Girard responded by saying that UMSU was withholding an unknown amount of funds from ASBC.

U1SC president Keji Preston also spoke out, claiming in October that U1SC had not received a budget since the previous year.

Documents provided by UMSU vice-president finance and operations Brook Rivard revealed that UMSU had been withholding $110,601.40 from ASBC and $5,070.04 from U1SC, claiming that the funds were being withheld due to issues regarding financial reporting from the groups. Preston disputed the U1SC figure.

Rivard attributed the confusion surrounding funds to possible accounting errors that may have been caused by post-pandemic disorganization, constant turnover in the union and a lack of updates making it difficult to access old financial reports. For these reasons, UMSU decided to pay out all outstanding balances.

Regarding where the process of paying out the funds currently stands, Rykiss said that UMSU has “started the process of giving out all of the money that was owed.”

“There will be two more rounds of funding, and then all of the funding will have been given out.”

He said that UMSU is scheduling training sessions for “each financial officer of each student association and faculty council” to make sure that they know and understand what information is required.