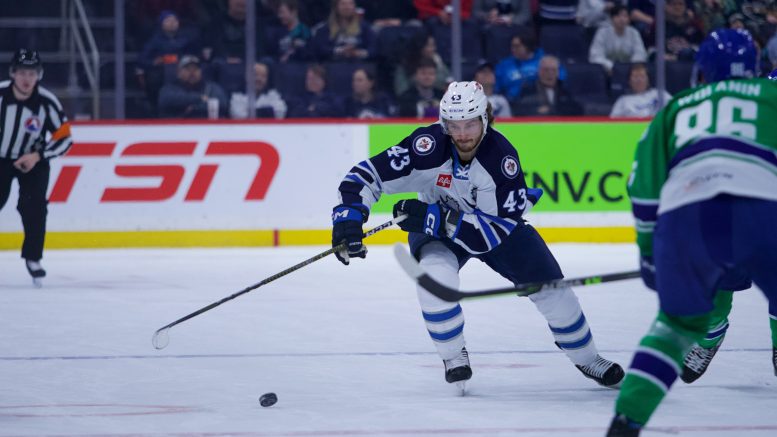 In their final series of 2022, the Manitoba Moose were swept by the Abbotsford Canucks. Although the Moose were supported by an enthusiastic crowd both nights, the Canucks dominated, winning game one 4-2 and the second game 5-2.

After winning their last four straight games heading into the holiday break, the Moose were second place in the Central Division.

However, injury trouble for the Moose’s parent club, the Winnipeg Jets, and the commencement of the International Ice Hockey Federation World Junior Championship in Halifax, N.S. and Moncton, N.B. meant that a number of key Manitoba players would not be in the lineup.

Kevin Stenlund, Ville Heinola, Kristian Reichel and Jansen Harkins were all with the big club, while Chaz Lucius and Brad Lambert had both been loaned to their respective countries.

Luckily for the Moose, the Jets loaned Dominic Toninato to their affiliate, providing Manitoba National Hockey League experience for the teams opening faceoff against Abbotsford.

In game one, each team traded chances for the majority of the first period. With just over two minutes left in the frame, a holding penalty against the Canucks gave Manitoba their first man advantage of the game.

In the dying seconds of the powerplay, centreman Tyler Boland carried the puck end to end before firing a low wrister past Canucks goalie Arturs Silovs for his first career American Hockey League goal.

The Canucks responded forcefully in the second period, scoring three goals on 13 shots. Justin Dowling kicked off Abbotsford’s offence by roofing it past Moose goalie Arvid Holm in tight, followed by Linus Karlsson on the powerplay, then Danila Klimovich in the second half of the period.

Down by two, the Moose had a sense of urgency in the third, putting up 14 shots in the frame. With the Manitoba net empty, Boland shot his second of the game past a screened Silovs to close the Canucks lead.

Unfortunately, that was as close as the Moose would get to winning. Canucks winger Phil Di Giuseppe scored an insurance marker on an out of position Holm with a minute and a half left, giving Abbotsford a 4-2 victory.

The next night in the Moose’s annual New Year’s Eve game was a similar result.

In the first period, Cole Maier slipped past the Canucks defence to open the scoring for Manitoba, before Abbotsford captain Chase Wouters banged in a loose puck past Moose goalie Oskari Salminen.

Nearly seven and a half minutes later, Evan Polei tucked a shot glove side past Silovs to regain the lead for Manitoba.

In the second, Wouters picked up a Klimovich rebound and fired it past Salminen to even the score.

With the score tied up, the Canucks took over in the third.

Midway through the frame, Winnipeg native Jett Woo finished off a nice pass from Klimovich on a two-on-one to give Abbotsford the lead.

As the Canucks dictated the play, Manitoba was limited to only three shots in the period.

Even with the net empty, the Moose were unable to close the lead. Nils Höglander and Dowling each scored empty net goals for Abbotsford to make it 5-2, helping the Canucks sweep the weekend.

Moose assistant coach Eric Dubois was happy with his club’s effort, but noted that the Moose did not execute in the last two games. He remarked that it appeared that the team’s first line was out of energy due to much of the club’s depth recalled to the Jets, which made it difficult to keep up with the quick Abbotsford team.

Dubois had high praise for the crowd at each game that weekend. There was a buzz in the air thanks to the holidays, something that Dubois said that players and coaches alike enjoyed.

“The guys could feel the excitement and the energy,” Dubois said.

“Obviously we didn’t respond as well for the home crowd, but nevertheless the players enjoyed very much to have those big crowds.”

The next home game for the Moose is Jan. 17 at 7 p.m. against the Chicago Wolves.

Cougars on the hunt for Bisons