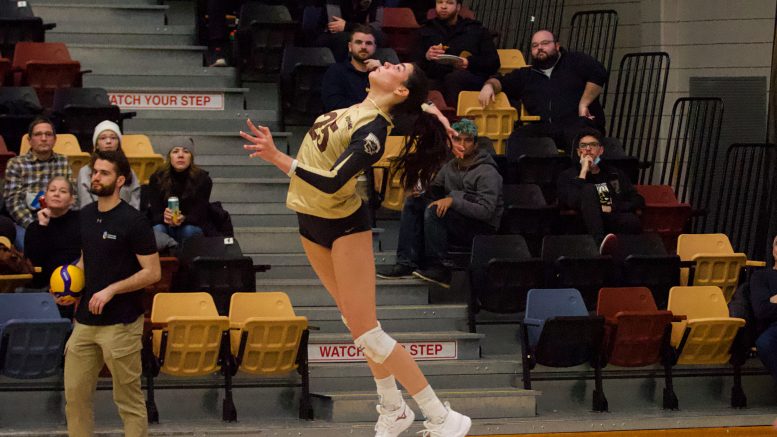 The University of Manitoba women’s volleyball team secured its 10th win of the season in Saturday’s game at Investors Group Athletic Centre. Playing against the University of Alberta Pandas, the game was high stakes, occurring in the last two months of the Canada West season.

The women’s squad is having a great season. They were on a three-game winning streak going into Saturday night’s match, with Friday’s game on Jan. 13 marking the herd’s ninth win of the season.

Saturday night’s match started off with the U of M scoring the first point of the game. However, the first set was narrowly won by the herd, 25-23.

The University of Manitoba also took the second set of the game, making it 25-22 after set point.

With a strong turnout at Saturday night’s game, it’s no wonder the U of M won the first two sets.

While U of M found itself behind in the beginning of the third set, the herd managed to rally for a sweep, clinching their fourth win in a row and improving to 10-6 on the season.

Number 25, Raya Surinx, was a huge asset in Saturday night’s game. When it came to blocking or achieving kills, she was consistently on the ball.

With number 14, Julia Arnold, getting digs left and right alongside the team’s captain, number 9 Light Uchechukwu, the two were truly indispensable this game, with Uchechukwu getting 11 kills in the match.

The women’s squad swept the weekend series, having won in three sets the previous night.

While the women’s volleyball team kicked off its season with a loss in late October, they have continuously prevailed throughout the year, now boasting a four-game winning streak. Currently, they hold sixth place in the Canada West standings.

The goal for the rest of the season as said by number 7, Ella Gray, is “always to make it to nationals.”

“It was really important that we really pushed through for these points and stayed persistent,” Gray added, highlighting the tenacity the team has shown so far this season.

It was in the second match of the weekend that Gray went on to achieve her ninth kill of the game, helping to seal the win for the U of M in just three sets.

“We weren’t wavering when they were catching up,” Gray continued.

With the U of M winning this Saturday, the team continues to be firmly in playoff contention in the Canada West conference.

The women’s volleyball team will play the Saskatchewan Huskies in Saskatoon, Sask. for the first time this season on Jan. 20 and 21.

Calling in the cavalry

Rashawn Browne and Bisons heading to the playoffs with a bye