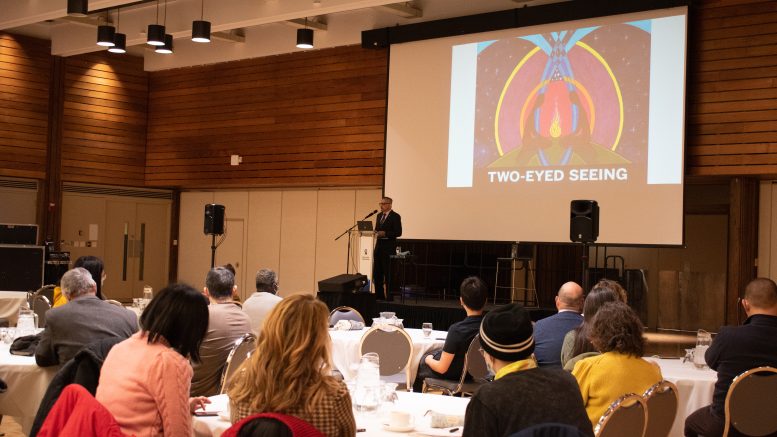 The word “polymathy” was first used in the title of a work in 1603 by philosopher Joannes Wower. It refers to encyclopedic knowledge that encompasses many fields.

A person who has such knowledge is known as a “polymath.”

Mario Pinto, the U of M’s new vice-president research and international, firmly believes in the power of merging multiple disciplines.

“In principle, if you bring disciplines together, you can do this far-out stuff,” he said. “But it’s a matter of having the experts in the different disciplines, and having them all play in the same sandbox.”

Before coming to the U of M, Pinto worked at Griffith University in Australia as deputy vice-chancellor research. During his time there, he oversaw several clinical trials which required co-ordination between experts in different fields.

Some of these trials used 3D printing and modelling to solve complex medical problems. Pinto’s team had to bring together engineers, computer scientists and AI specialists to work with surgeons.

Before performing surgery, these specialists would create models of patients that Pinto described as “digital twins.” The surgical team would then be able to practice on the twin before operating on the patient. This clinical trial used the same strategy to perform complex pediatric hip procedures. After treating 20 children, the trial found that the need for repeat surgeries was reduced significantly.

This technique was also used in a trial that sought to treat aneurysms in stroke victims. An aneurysm is an abnormal expansion of a blood vessel that can rupture and cause serious complications.

Since no two aneurysms are exactly alike, having a digital model of the enlarged blood vessel gave surgeons the chance to fine-tune their technique before the operation.

Pinto has also been involved in projects that require a collaboration between the arts and sciences.

While working at Simon Fraser University, he was a leader in an interdisciplinary study of the evolution of human culture. The project brought together various experts such as anthropologists, evolutionary biologists and even economists to work together on the research.

Pinto has been merging the arts and sciences since well before university. His relatives on his mother’s side were heavily involved in artistic pursuits such as music, poetry and theatre.

Pinto added that his maternal great-grandfather had one of the first printing presses in Sri Lanka, the country where he grew up.

Pinto’s father’s relatives, on the other hand, were involved mostly in the sciences. His grandfather and great-grandfather were both apothecaries, another term for a pharmacist. His father was also a forensic chemist.

Because of his paternal family history, Pinto considers himself to be a fourth-generation chemist.

Although Pinto wanted to maintain his dual interest in the arts and sciences, he had to choose one or the other when he went to university.

During his undergraduate degree, Pinto switched his topic of study multiple times. He entered various majors such as musical theatre, math and the live sciences.

Eventually, Pinto graduated with a degree in chemistry, but he was not done mixing disciplines. While pursuing his PhD at Queen’s University, he also worked with supervisors at the University of Toronto and Dalhousie University.

Since all three of his supervisors had different specialties, Pinto was able to assemble a thesis that reflected his diverse work experience.

Although his formal educational background is chemistry, Pinto continues to engage with the arts. He often uses art to depict scientific concepts.

Diversity of many kinds has always been a theme in Pinto’s life. In Sri Lanka, he grew up being exposed to people of many different backgrounds and religions from a young age.

Pinto’s own origins are also diverse. His ancestors are a mix of Sri Lankan, Portuguese and Goan. Being exposed to multiple cultures taught him to be open to different philosophies and ways of knowing.

He has always been interested in international relations and has spent many years working abroad. His research has taken him to Europe, Latin America and the Caribbean.

Pinto said that having a worldwide network of researchers brings many of the same benefits as interdisciplinary collaboration.

“It’s the same principle,” he explained. “You have very different perspectives. People have been trained differently, they’re exposed to different cultural norms and what drives them is very different. And they ask very different questions. So one can learn a lot from that.”

UMSU to vote on support of Respondus Monitor