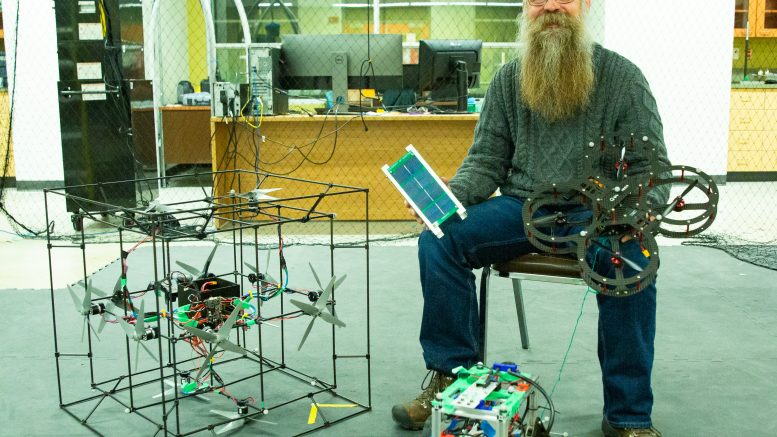 From childhood, Philip Ferguson aspired to be an astronaut.

This prompted his professional journey into the aerospace industry, which eventually led him to work on Canada’s first space telescope.

Now an associate professor of mechanical and aerospace engineering at the U of M, Ferguson seamlessly blends his experience in the aerospace industry with academia.

“My research is trying to kick the aerospace industry in the pants and say, ‘hey, why don’t we start adopting new technology, taking on a little bit of risk, but taking that risk on in smart and intelligent ways,’” he said.

The U of M’s Space Technology and Advanced Research Laboratory (STARLab), which is directed by Ferguson, works on a wide array of technologies.

The team uses rover systems in “trying to understand how new next-generation Mars rovers or lunar rovers can better navigate those planets to explore different areas for possible human habitation,” he said.

The STARLab in the Engineering and Information Technology Centre at the U of M’s Fort Garry campus has a testing area for drones and new satellite control systems.

Additionally, Ferguson noted the presence of electronics workbenches, which are used to develop “avionics systems or sensor systems for drones and rovers.”

“It allows our students to have access to world-class space systems and aerospace engineers at Magellan,” Ferguson explained.

“These students train there. They learn skills like soldering, space systems assembly, integration and tests, and ultimately many of these students end up taking on full-time jobs at Magellan Aerospace when they’re done.”

Ferguson described this facility as having a “large clean room” used in satellite construction, developing flight systems and testing systems that eventually go to space.

As a NASA satellite currently heads back to Earth from an asteroid, Ferguson highlighted that the rock samples harvested are being exposed to space radiation.

“We have this question saying, well, what is the radiation doing to these rocks in the time that it takes them to go from the asteroid back to earth?” he asked.

This question can be explored using a CubeSat — a small satellite made up of cubes, each approximately the size of a Rubik’s cube — which can be used in understanding how rocks change on exposure to space radiation. The STARLab is currently finishing construction of a CubeSat composed of three cubes, or about the size of a carton of milk, for this purpose.

“We’re taking some little micro-meteoroids that crash to the earth, we’re taking little bits of the moon that the Apollo astronauts harvested when they went back there in the sixties and seventies, and we’re sending them back up into space,” Ferguson explained.

“We have cameras that [are] going to be taking pictures of them several times a day, and we’re going to watch how space radiation changes those samples.”

In collaboration with Indigenous communities in Churchill, Man. and Inuit communities in Nunavut, Ferguson and his team also plan on developing a second satellite to understand the impacts of climate change on a warming Arctic.

Ferguson explained that the team is in the early stages of designing a new sensory CubeSat that would be capable of measuring ice qualities in Northern Canada, as climate change is causing the ice to become increasingly hazardous to communities that rely on it.

“They can use that as part of their network of data systems, that they use to understand the ice and the environment around them,” he said.

Then there is the DroneZone project — a warehouse facility that received funding last month from Prairies Economic Development Canada. This is projected to be one of the world’s largest robotics indoor motion tracking systems, and would be used in testing new drone control systems in the safety of an indoor facility.

“This is going to open up the door to a whole new era of drone technology,” Ferguson said, explaining that these drones could be applied in the agriculture and construction industries, and even in exploring new planets.

“There’s really no end of applications of drones in our society right now,” he added.

“We’re absolutely thrilled and excited to be developing some of those technologies at DroneZone.”

Ferguson’s research ultimately aims toward making space and aerospace systems accessible to both researchers and communities at large, without a million-dollar budget.

“Manitoba is a huge hub of aerospace research and manufacturing, and it’s really an honour and privilege to be working in such a great environment,” he said.

U of M’s new vice-president research and international