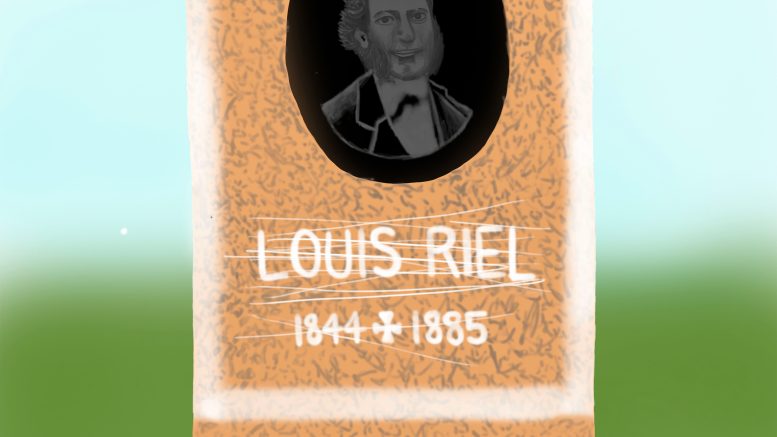 Louis Riel’s headstone, located in St. Boniface Cemetery, was defaced on Oct. 17. The vandal made numerous cuts into the image of his face and the name on the headstone.

Riel was a powerful figure in Manitoba’s history. He led a Métis provisional government to found the province of Manitoba during the Red River Resistance of 1869-70, and was later found guilty of treason and hanged for his actions during the 1885 Northwest Resistance, which took place in what is now known as Saskatchewan.

To make a very long and interesting story short, following these events Riel became something of a martyr for Métis people.

Rather than an act of random vandalism, the defacement of Riel’s headstone was an outright act of racism against the Métis people of Manitoba, though this is hardly a surprise. The hatred of the Métis, and by extension its leaders, has a long history in Winnipeg.

Only a short drive from Riel’s headstone is Elzéar Goulet Park, a Winnipeg attraction named after another Métis man.

Following the Red River Resistance, Goulet was assaulted by a mob. On Sept. 13, 1870, he was chased by the mob from Portage and Main to the Red River. Fearing for his life, Goulet dove in and was pelted by rocks while he swam until he fell unconscious and died.

The deaths of Riel and Goulet were extreme acts of violence, and the infamous displacement of the Métis living in Rooster Town was yet one more.

An entire neighbourhood of Métis people, known as Rooster Town, was displaced by the City of Winnipeg in the 1950s, many of them forcibly relocated to the North End. This event shows that the violence against Métis people was structural as well as physical.

Acts of violent racism or outright displacement against Métis people rarely make the news today, but that does not mean that racist sentiment toward Métis people is gone. The 2019 General Social Survey on Canadians’ safety, administered by Statistics Canada, found that 24 per cent of Métis people had experienced discrimination within five years of the survey.

I, as a Métis person, have personally experienced numerous acts of racism within Winnipeg. I have been followed in multiple businesses and even escorted out of establishments. I have received racist comments from non-Métis people, such as being asked why my people “do not have to pay taxes” or why we “get free stuff all of the time.”

The only time I have ever been stopped and escorted to an entrance to remove my bag was at our very own University of Manitoba Bookstore while on a field trip with other Indigenous students in 2018. I have been in the UM Bookstore dozens of times, but that was the only time I was ever asked to remove my bag. I only realized I was being discriminated against when I watched my white friends enter the store without being stopped.

There have also been individuals who have referred to me with outright slurs, such as “half-breed,” a term referring to the nature of the Métis as a blended ethnocultural group. While my experiences have ranged from innocent ignorance to outright verbal racism, I have thankfully never experienced an instance of violent or physical racism.

The defacement of Louis Riel’s grave sends a message to the people of this city, especially the Métis.

On one hand, it provides a glimpse to non-Métis and non-Indigenous people into the world that Métis people are well aware of.  On the other hand, it serves as an uncomfortable reminder of what Métis people and racialized groups in general already know.

It can be easy to live as though racism in Winnipeg is a thing of the past, but that is only a fantasy.

Another winter of discontent