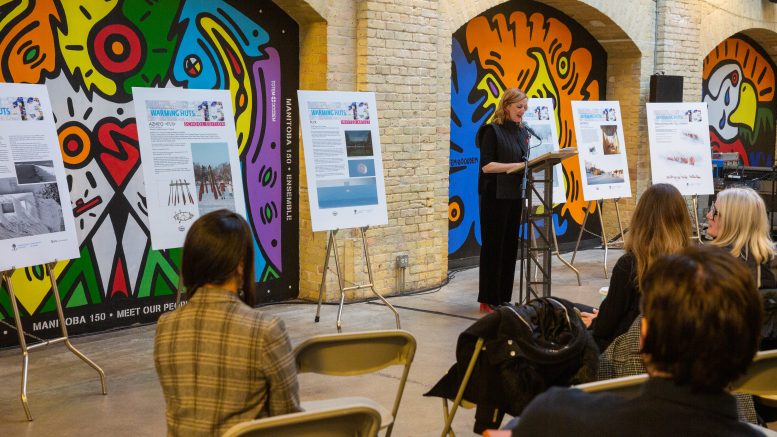 Returning for its 13th year, Warming Huts v.2023: An Arts + Architecture Competition on Ice revealed its winners, invited artists and the first participants in its new high-school component on Nov. 10.

The competition and invitations involved artists designing new warming huts for placement along the Forks’s Nestaweya River Trail on the Red and Assiniboine rivers.

The winning huts this year are “Hayspace” by Philipp Gmür and Hugh Taylor, “Curtain” by Alejandro Felix and Fang Cui and “Meanwhile We Still Dream” by Lindo Jia and Jaymon Diaz.

Among the huts designed by invited artists was the U of M’s faculty of architecture submission, “Flowing Lands.”

Locher said that this year’s project “will engage the community in structures that emerge from the frozen river and intersect with the wind to capture the dancing snow that falls from the winter sky,” adding that “the resulting snowscape will be a playground for the public, and the shifting forms will be the subject of continuous study for our team.”

Jason Hare, manager of the U of M’s digital fabrication lab known as the FABLab, told the Manitoban that the faculty of architecture always has a spot in the exhibition held for it and its entries. The opportunity is passed around and a written internal submission is sent to the faculty.

Explaining the origins of this year’s design, Hare said, “we were doing some internal research of flow simulations through digital models, and as we were doing that we were starting to realize, ‘Oh, this would be good if we could test it at a really large scale and get students involved in the design side.’”

Hare explained that the design was inspired by Winnipeg’s accumulation of snow, and that the team recalled childhood memories of snow-piled hills with “waves coming off them.” The space itself will interact with falling and blowing snow, shaping the snow into mounds with fencing.

The question  that the team came across  was, “can we use this simulation tool to attempt to simulate bigger snow collection agents?” he said.

“Then we would perform that on the river and we’d actually be monitoring it all winter. So that’s what we’re going to do, we’re going to be recording the information of the snow collecting, and then matching against the simulation to see if we can draw it in tighter together.”

Hare added that beyond the technical aspects of the hut, the spirit of the structure would lie in creating a snow fence that would shape snow in an interesting way, with the intention that kids and their families would feel encouraged to play on the resulting snow piles.

“If mystery could come into it, that’d be even better,” he said.

Hare said that as a child, everything feels “so titanic and magical,” and he hopes there will be a level of play and magic that individuals feel while interacting with the structure.

The warming huts will be finished and out on the river trail by the end of January.

The Hub opening delayed once again

Adapting to Winnipeg with art