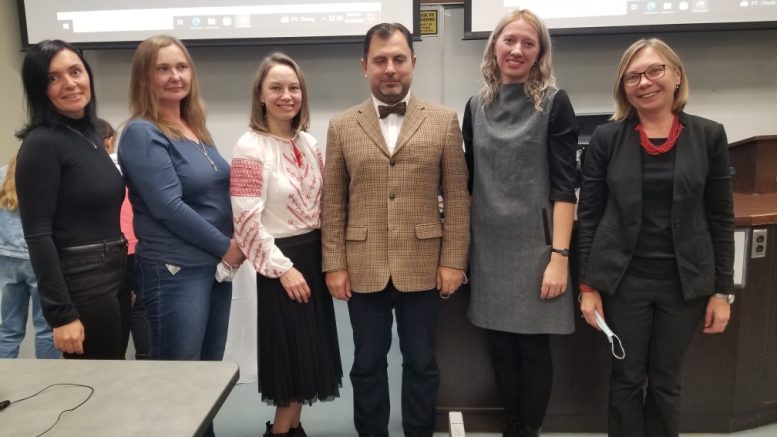 The Ukrainian community is one of the largest European diasporas in Manitoba — arriving in multiple waves of immigration beginning in the late-nineteenth century.

Today, the diaspora maintains its connection with Ukraine. For example, the community has a cultural centre in Winnipeg called Oseredok, which is dedicated to preserving and transmitting Ukrainian culture, language and heritage.

During Russia’s ongoing invasion of Ukraine, the Ukrainian-Manitoban community has been supporting its fellow Ukrainians both in Canada and abroad.

Iryna Konstantiuk, a senior instructor at the U of M’s department of German and Slavic studies, said that what she is observing at this moment is “consolidation.”

“The whole Ukrainian community is consolidated around Ukraine and the war in Ukraine,” Konstantiuk said.

The five scholars arrived on a visa known as the Canada-Ukraine authorization for emergency travel (CUAET). This new travel measure allows Ukrainian nationals and their family members to come to Canada to work, live and study until they can safely return to Ukraine. Several individuals have arrived in Winnipeg from Ukraine via the CUAET.

Supporting Ukrainian academics, particularly those teaching Ukrainian language, is especially necessary because the Russian government has targeted Ukrainian educators. Many of these educators are from the eastern Kharkiv oblast.

Kharkiv, the capital city of the oblast, is the second-largest city in Ukraine. Ukrainians refer to Kharkiv as “the student’s city,” because it has so many academic institutions.

According to a QS university ranking, Kharkiv is home to the number one university in Ukraine — V.N. Karazin Kharkiv National University, often known as Kharkiv University. The university alone has a botanical garden, four education and research institutes and three museums.

As a result of the February 2022 invasion, many of Kharkiv University’s science laboratories ceased operations.

Losing some of the country’s best labs has been a major loss for Ukrainian academia. Even though many Kharkiv professors were able to continue their research in western Ukraine, the facilities are not as advanced as they are in Kharkiv.

The motivation for the Russian government to erase Ukrainian identity is to undermine Ukrainians’ right to self-determination — imposing a similar ideology on its Indigenous minorities, who are forced to learn Russian and adopt a Russian identity.

Supporting Ukrainian development as well as Ukrainian cultural and academic institutions helps to counter the myth that Ukraine has no culture or life of its own.

“Ukraine is, right now, in a state of a terrible, horrific war and it needs all the help possible, in any area you take,” Konstantiuk said.

“And every life matters. Every life of a student, of a scholar, matters a lot.”

40 years strong for Plug In