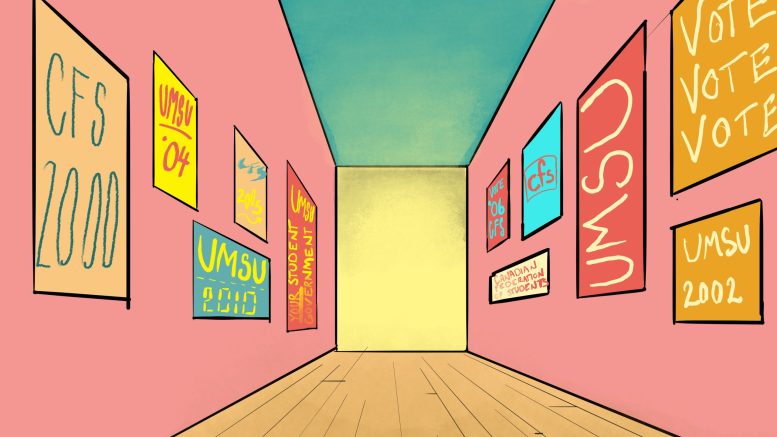 The University of Manitoba Students’ Union (UMSU) has once again held a vote in an
attempt to legitimize their efforts to leave the Canadian Federation of Students. The previous
vote, held in 2018, was a non-binding plebiscite where a clear majority of UMSU members
voted to remain a part of the federation.

The historical context of this saga, however, often evades students who typically only
spend three to five years earning their degrees.

There has been a lot of information thrown around recently regarding the nature of the
dispute, especially by current and former UMSU executives, so I’d like to use my lengthy U
of M experience to offer a more nuanced perspective.

My first term at the U of M was in fall of 2012, and the very next year saw an UMSU
election unfold that would become pivotal in the defederation campaign that followed.

The 2013 election saw Al Turnbull defeat incumbent Bilan Arte’s second run at the
presidency, with Turnbull going on to win the next election in 2014 as well.

Arte, meanwhile, went on to assume leadership of the Canadian Federation of Students’
Manitoba branch, and later took the helm of the entire organization as chairperson.

Disputes between UMSU and the federation didn’t take long to start after Turnbull took
office. UMSU execs spent hours in September of 2013 tearing out Canadian Federation of
Students promotional pages from some 20,000 student agenda books, all because UMSU
believed it should be able to renege on its contract and purchase the books from a different
distributor at a lower cost.

The very next month, UMSU set up an ad hoc committee to review its relationship with the
Canadian Federation of Students.

UMSU also switched health insurance providers in 2013 from Green Shield Canada, a
non-profit insurance service, to Studentcare as an opportunity to save student money.

The costs of the new plan for U of M students increased in 2015 to surpass the Green
Shield cost by almost $100. This increase was followed by a reduction of coverage in 2016,
again undermining the original justification offered by UMSU for the change in insurance
providers.

Another major disagreement between the union and the Canadian Federation of Students
came to a head in 2015, when UMSU refused to pay $640,000 in dues owed to the
federation. Apparently, UMSU refused to pay because the federation was ignoring its
requests to change ownership of the umsu.ca domain.

At the time, UMSU’s domain was being hosted on a server through the Canadian
Federation of Students. Despite this specific issue being resolved later that year, the amount
owed to the federation grew to almost $1 million by 2016 before it was finally paid in full.
The animosity didn’t stop there, though, as 2016 and 2017 were full of Canadian
Federation of Students-related drama for UMSU executives.

UMSU vice-president external Wilfred Sam-King alleged that he was prevented from
speaking at a federation-organized demonstration in early November of 2016. Later in the
month, UMSU president Tanjit Nagra lost her election campaign for national chairperson of
the Canadian Federation of Students. By December, the UMSU executives had convinced UMSU council to demand a formal apology from the national executive of the federation for
alleged harassment at the federation’s recent National General Meeting.

These events set the stage for late 2017, when UMSU council voted to hold the previously
mentioned plebiscite in January and February of 2018 on whether or not students wanted to
continue membership in the Canadian Federation of Students.

Despite the majority support for continued membership in the federation, the UMSU execs
continued their defederation efforts, lobbying the Progressive Conservative-led Manitoba
government to amend the University of Manitoba Students’ Union Act. The amendments
introduced a mandate that all membership in external organizations be affirmed by a council
vote every two years.

Later in 2018, the very same year that students voted to remain part of the federation, the
execs recommended that the UMSU board of directors vote against affirming membership
within the Canadian Federation of Students.

This vote was required due to the UMSU Act amendments made earlier in the year, which
the previous execs had lobbied for. Denied the popular support of the student body via the
plebiscite, UMSU execs had shifted strategy in order to “legitimize” their defederation efforts,
instead enlisting the support of provincial politicians and members of the UMSU board.

And now once again, after having withheld over $1 million in membership fees from the
Canadian Federation of Students, UMSU is being sued. This time is different though,
because UMSU now claims they are no longer a member of the federation. Much can be
said about Turnbull, who started most of this mess, but even he was very careful around the
defederation question.

In early January 2015, when speaking about the fees UMSU was withholding from the
federation, Turnbull said, “If you want to leave, you’ve got to follow the rules to leave. And
not paying fees is definitely an easy one for a judge to look at.”

A couple weeks later he added, “If we wanted to leave, this is the worst way to go. A judge
in Manitoba would just say, ‘this is illegal, you’ve got to pay them.’”

Things have changed since 2015, such as the UMSU Act amendments, but contractual
obligations remain unfulfilled and I believe that this leaves UMSU open to liability. The
Canadian Federation of Students has their bylaws, and if they are followed properly student
unions can defederate successfully.

It is unfortunate that the current UMSU executives have shown such a wild disregard for legal
responsibilities, but only time and a court of law will tell what happens next.

Students give president a piece of their minds