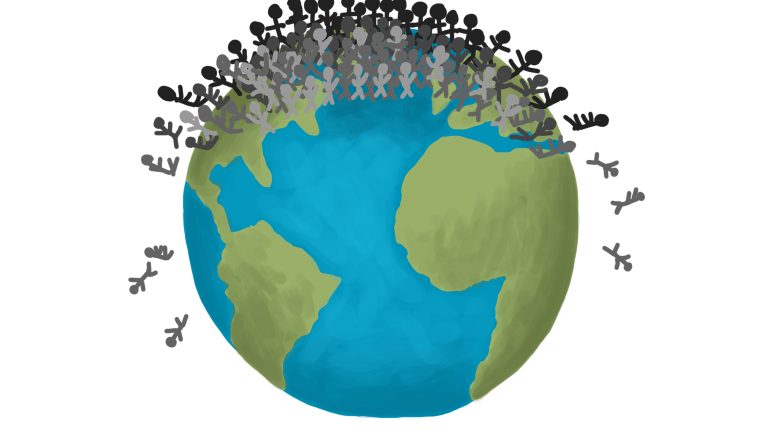 The Earth hit the population milestone of eight billion people on Nov. 15. According to the
United Nations, the world’s population will reach 9.7 billion people in 2050, and may peak at
about 11 billion by the end of the century.

These figures raise concerns about overpopulation, which has long been warned of as a
threat to our society. As our population continues to grow every year, we face questions
about what this means for us, our environment and our future.

The good news is the world population’s rate of increase has been steadily declining since
the 1960s, from two per cent to just under one per cent in the last 50 years, and developed
countries including Canada are seeing fertility rates drop.

So, where is most of the current growth happening? Most of the population growth seen in
2021 was observed in sub-Saharan Africa, followed by Central and Southern Asia and then
Eastern and South-Eastern Asia. However, even in these regions there has been an overall
decline in fertility rates compared to previous decades.

Even though the numbers suggest that we are moving in the right direction, we must take
into account the fact that while our population is growing, resources are being used up at an
unsustainable rate due to overconsumption.

This is alarming, since the problem of overpopulation will put further strain on our
depleting pool of resources and produce more emissions. However, overpopulation is
currently being overlooked in favour of the overconsumption problem that many developed
countries are facing.

This problem is troublesome by itself, since humans are presently using the resources of
about 1.75 planets, and consumption will only be further exacerbated as the population
increases by one or two billion in the upcoming decades.

Although the two issues may not appear to be related because overconsumption is more
pronounced in wealthy developed nations where growth has slowed, 34 per cent of
immigrants from developing nations move to developed nations. This impacts the population
density of these locations, and will therefore have an effect on the amount of resources
consumed in those regions, as more people will require homes, food, clothing and energy.

Additionally, immigrants to developed nations who would have been causing less
emissions before relocating will eventually adopt their higher-emitting neighbours’ habits and
lifestyles, which in turn will contribute to a faster depletion of resources.

This is all to say that overpopulation is a global issue, and is not just contained within
developing regions. Just because birth rates are significantly lower here does not mean we
are free from the consequences that overpopulation has on our environment.

We are doing a great disservice to our planet by ignoring overpopulation and pitting it
against overconsumption. Climate change is not a multiple-choice question with only one
right answer. The climate catastrophe is being caused by a variety of reasons, all of which
must be addressed if we are to have the maximum chance of surviving.

Even though population growth is inevitable at this point, there are still steps that can be
taken to further slow it down while simultaneously reducing our ecological footprint.

All of these things are benefits that are mutually advantageous to nations and their
citizens, while also supporting the health and development of these regions and reducing the
global birth rate.

I don’t advocate for controlling and limiting birth rates or stopping immigration, but if there
are practical, ethically sound and advantageous ways to moderate the population growth, I
don’t see why we shouldn’t at least try.

As billions more people will be born in the upcoming decades, what state will the world be in
when they get here?

“Who has jurisdiction over water?”