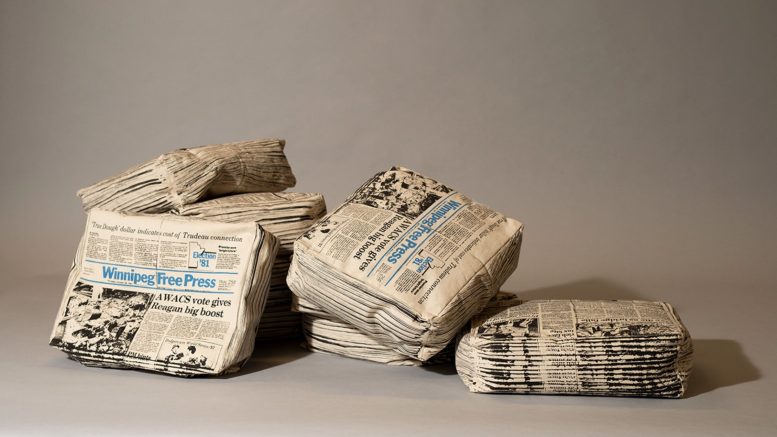 The Winnipeg Art Gallery (WAG) is holding an opening celebration for a new exhibit commemorating the 150th anniversary of the Winnipeg Free Press this upcoming Friday, Dec. 2.

Headlines: The Art of the News Cycle will feature a plethora of mixed media pieces in relation to the 21st-century news cycle and the history of local news.

Doors for the free event open at 6 p.m., and attendees will hear from editor of the Winnipeg Free Press Paul Samyn, WAG-Qaumajuq director and CEO Stephen Borys and head of collections & exhibitions and curator of Canadian art at WAG-Qaumajuq Riva Symko.

“What’s unique about this exhibition in particular is that it’s kind of a blend between a meditation on the media and news itself, whilst also thinking about the local context, in relation to the Winnipeg Free Press in particular,” Symko told the Manitoban.

Each contemporary artwork in the show will have a corresponding deep dive activity. Attendees will be provided iPads with poll questions ranging from how much time they spend with a newspaper to stories they would like to see in the Free Press.

“Halfway through this exhibition planning, I started to see the space myself as just a space to actually meditate on something that we consume every day, whether we want to or not, and just space to think about how and what we’re consuming,” Symko explained.

She later added that she wants to know what journalists themselves have to say in regards to the exhibit.

“I’m interested to hear their take on something that is different for someone like me, who is involved in art every day, who of course consumes media but isn’t involved in the actual making of it,” she said.

“So I’m interested to see what some of our local reporters, local journalists [and] local newsmakers have to say too.”

When asked what he hoped attendees would take away from the exhibit, Free Press editor Samyn said he thinks “there is a bit of similarity between art and journalism in the sense that there’s a way stories can be told, and ideas expressed.”

“Obviously art tends to move by way of a canvas,” he said. “They have paint, we have ink.”

Samyn believes the exhibit will also showcase a duality of both the growing awareness and growing concern regarding the importance of “independent, fact-based journalism.”

“As much as this exhibit in part is marking the 150th anniversary of the Free Press and our history in this province, I think it’s also about the future,” Samyn said. “Democracy is under threat, in part because there’s a lot of disinformation and a lot of misinformation, and people are able to exploit people’s lack of knowledge, lack of awareness.”

“This exhibit lands at a place and a time where there needs to be a really good discussion and understanding and appreciation of a newspaper like the Winnipeg Free Press, and the role that newspapers and fact-based journalism play in our society.”