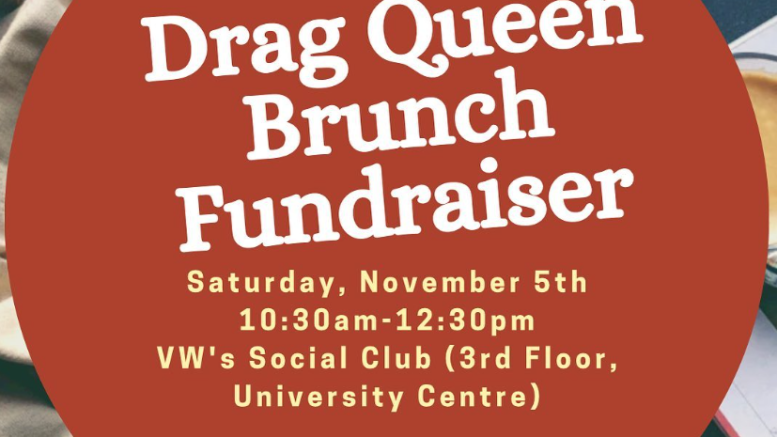 provided by RPC and the U of M NSA

A drag brunch fundraiser hosted by Rainbow Pride Centre and the U of M Nursing Students’ Association (NSA) will be taking over VW Social Club at University Centre on Nov. 5 from 10:30 a.m. to 12:30 p.m.

The proceeds will be donated to Reaching Out Winnipeg (ROW), a volunteer-based organization formed in 2012 that promotes the resettlement of 2SLGBTQIA+ newcomers in Winnipeg.

The idea for the drag brunch started with an Instagram post that Canda had read about an individual’s experience getting kicked out of their home due to their gender and sexual identity.

“That kind of just inspired me to do something for a cause for an individual like that,” they said.

When asked why ROW was their organization of choice, Canda told the Manitoban that they were “looking for an organization that supports exclusively 2SLGBTQIA+ individuals who are homeless.”

After doing some research into organizations within Winnipeg that support individuals struggling within this parameter, they discovered ROW.

“This is an organization that supports asylum seekers and refugees here in Winnipeg that are part of the sexual identity and gender identity minorities, and as well as all over the world,” Canda said, adding that they did not just want to give ROW money, but publicity as well.

Putting a spotlight on a relatively lesser-known organization like ROW is a benefit not only for the group, but also for the wider U of M student body, as students may discover that resources are available to them if they fit ROW’s criteria.

Meanwhile, Scout Coffee + Tea — which calls itself “Winnipeg’s only play cafe” and hosts a multitude of family-friendly events for children — announced a Drag Queen Story Time event which was met with backlash online.

Scout Coffee + Tea has defended its decision via social media and highlighted the support they have received.

“I’ve been frequently told by those against this event that it’s a fetish, strippers, sexual, etc.,” the cafe’s management posted in an Instagram story on Thursday, adding that “drag at its core is entertainment.”

Canda said that alongside fundraising for ROW, the event is also about promoting drag performance and showing representation.

“That’s to normalize those kinds of performances as well with kids, so that they grow up to be as inclusive as possible and when they see a drag performer out there, they don’t have any negative thoughts about them or associations with them,” Canda explained.

The representation does not just end with drag, however. An emphasis on having diverse performers has been put into this event. The performers come from various backgrounds, and one of them is even a U of M student.

“We encompass not only Caucasian people, we’re also encompassing people of color and Indigenous identity and that lineup of performances as well,” Canda said.

“So not only are we including sexual and gender identities, we’re also including other ethnicities as well.”

Tickets for the Drag Queen Brunch Fundraiser are available at eventbrite.ca/e/drag-queen-brunch-fundraiser-18-only-tickets-444461394997.

Libyan students feel effects of revolution from miles away

From summer camp to the spotlight