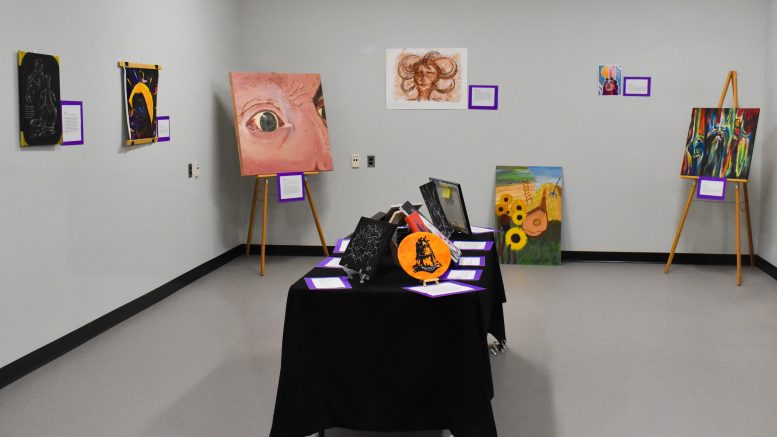 Walking into the opening for the University of Manitoba Students’ Union (UMSU) UNRAVEL mental health art exhibit was startling. I had submitted one of my paintings for the show and was excited to see it publicly displayed for the first time. My excitement quickly turned to shock, then dread as I walked around the exhibition.

The show was held Nov. 15 in a multipurpose room on the second floor of University Centre — a large, echoing space with wood panelling and yellow lighting. Music blared from speakers in the corner loud enough to drown out thought, let alone allow for conversation.

Pieces were crudely hung with visible command strips. In place of placards describing the works were hand-cut labels tacked onto purple construction paper, which listed the artists’ names but not the titles of the artworks. The labels also did not include the year the work was made or the dimensions, and some didn’t list the medium either.

Two digital pieces were projected onto crumpled screens, too dark in the bright room to be visible. One image was misaligned, part of the projection illuminating the wall behind it and showing the settings menu at the bottom of the screen.

A hanging sculpture of a cloud was strung up on what looked like a damaged stand that would collapse at any minute. One painting was sat on a small table and leaned up against the wall in the corner. My own painting was propped up on a flimsy easel.

The paintings of my classmate and fellow bachelor of fine arts honours student Maryam Bagheri were attached to black metal tripods, displayed at waist height. The sticky note that organizers had asked artists to attach, ensuring a return of work was still stuck to the back of one of her paintings. Her phone number, student number and full name were visible to anyone in attendance.

As the opening went on, a speaker came onto the stage set up on the other side of the room and asked for the people in attendance to sit. I assumed we would hear a short speech from the organizers about the artworks, or a presentation from someone from the university on the subject of mental health.

Instead, we were introduced to comedian Adam Grabowski, who on his website bills himself as a “mental health advocate and lecturer” who performs “socially conscious comedy.”

Having a comedian perform at an art opening about mental health was already an odd choice, but Grabowski made sure it was a bad one too as he spoke to audiences members in an awkward, uncomfortable way.

While I was worried about being called out by Grabowski, I left near the end of his very long set, apologizing to the friend I had brought with me.

I spoke with Bagheri the next day about the show, and her thoughts mirrored my own, saying she felt embarrassed by the exhibit and that the displays showed a disrespect for her work.

UNRAVEL was promoted as a mental health exhibit, and the call for artwork was sent out to university students of any faculty. For students outside of the school of art, this may have been their first opportunity to show their work.

The resulting show was unprofessional and disheartening. The curation felt like an afterthought, if it was thought about at all. It’s hard enough to put yourself and your art out there, especially when speaking on a subject as sensitive as mental health.

The exhibition was a disservice to not only the art pieces shown, but to the artists themselves.

The UMSU organizers did not involve me in the installation of my works. They could have reached out to the school of arts’ student association for assistance in planning the event, or contacted the school of art gallery’s curatorial team for advice. But it seems like they didn’t even bother to Google search “how to hang a picture.”

Once the opening was dismantled, the artworks were moved to room 102A, University Centre, a small room across from the UMSU Service Centre. There, artworks sat on the floor, not hung up for a time.