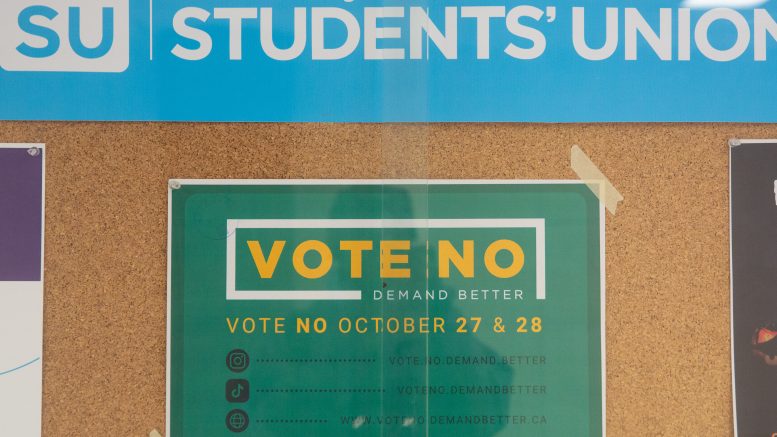 A motion for a legal injunction filed by the Canadian Federation of Students, aimed at stopping UMSU’s planned referendum on the student union’s continued membership in the federation, was dismissed by the Court of Kings Bench on Monday.

Campaigning for the referendum was briefly suspended while UMSU awaited a decision from the court on whether the referendum — which is scheduled for Oct. 27 and 28 — would be allowed to go forward.

“The referendum campaigning, which included campaign websites, social media and on- the-floor campaigning among other activities, was put on hold at the direction of the CRO on Tuesday morning following a consultation meeting with the UMSU board of directors on Monday evening,” UMSU president Jaron Rykiss told the Manitoban in an email on Saturday.

Rykiss also said that UMSU would not know whether the referendum would proceed on the scheduled dates until they received a decision from the court.

In a text message to the Manitoban on Monday, Rykiss called the decision “a huge win for democracy,” and said that the sides would “resume campaigning right away.”

“Our student body deserves to vote here,” he added. “We want them to have that ability!”

“The injunction looked to prevent the student voice from being heard. We are against that.”

The Instagram account for the pro-leave side, @vote.no.demand.better — which was made private following the injunction — is once again public.

Posts made on the account before it was made private claimed that the referendum will cost UMSU approximately $10,000 to run.

Rykiss was unable to confirm this figure due to concerns regarding UMSU’s ongoing legal disputes with the Canadian Federation of Students.

The relationship between UMSU and the federation has been conflictual for years, with UMSU making numerous attempts to defederate since 2013.

In recent years, online voting has been a particularly contentious issue between the two organizations.

The Canadian Federation of Students’ rules require that member organizations must hold a referendum of their membership before deciding to defederate.

The federation has already ignored previous requests from UMSU for online voting during the COVID-19 pandemic.

The student federation is currently suing UMSU for withholding three years’ worth of fees totalling more than $1 million.

UMSU withheld the fees in protest of the federation’s refusal to allow the student union to operate a referendum using online voting.

UMSU plans to conduct the referendum this week using online voting, both from students’ personal devices and an online voting booth in University Centre.

The federation amended their statement of claim against UMSU on Oct. 14 to “seek relief with respect to the referendum, including an interim/interlocutory and permanent injunction.”

The injunction—an order that restrains one party from an action that threatens to invade the legal right of another—stopped UMSU from campaigning temporarily.

Once the injunction was dismissed, campaigning resumed.

In addition to requiring a referendum, the Canadian Federation of Students bylaws state that any member organizations must pay all outstanding fees six weeks before a defederation vote.

UMSU argues that the federation’s bylaws do not apply to it, as it is bound to follow the University of Manitoba Students’ Union Act and its own bylaws. The bylaws require the board to vote on membership in external organizations every two years, and to terminate membership if the vote fails to achieve a majority.

UMSU also asserted that the Canadian Federation of Students has refused to fulfil its contract with the union — and therefore freed UMSU from the federation’s defederation process — by failing to address issues that UMSU has brought forward for years, and for refusing to accommodate the request for online voting during the pandemic.

The Canadian Federation of Students argued that its bylaws regarding referendums predate UMSU’s bylaws and asserted that “the UMSU bylaw cannot retrospectively affect the rights of the parties.”

The federation asserted that allowing the referendum to move forward would undermine their voting protocols and may lead other student associations to follow UMSU’s example.

The court disagreed, ruling that the federation had not provided compelling evidence that allowing the referendum to take place would cause “irreparable harm,” and dismissed the concern about other student unions following UMSU’s example as speculation.

The court also asserted that the federation’s goal “appears to be preventing decertification,” and that the organization was primarily concerned with preventing the loss of revenue this would cause.

The Canadian Federation of Students has a reputation for being challenging to leave, with the organization seeking legal action against other student unions that have attempted to defederate.

Earlier this month, the Ontario Superior Court of Justice ordered the Carlton University Students’ Association to halt its non-binding referendum on continuing membership with the federation.

U of M needs to get up to public transit speed

‘Our learning shouldn’t stop in the classroom’