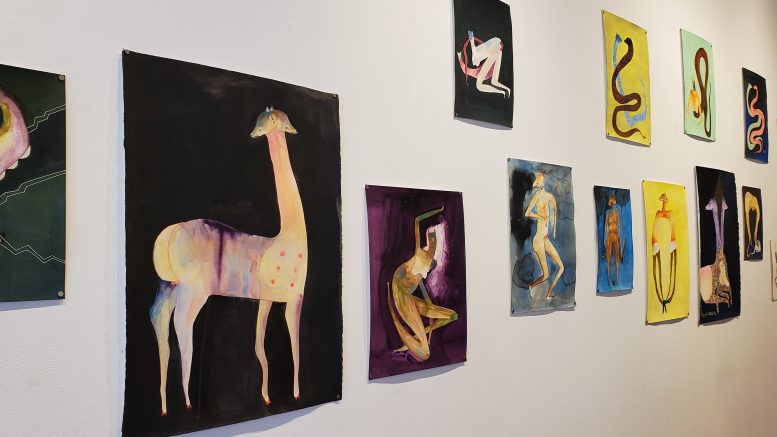 Gallery viewers looking to discover novel art on a budget will find that Mentoring Artists for Women’s Art (MAWA) has lots to offer throughout October. In collaboration with the U of M institute for the humanities, MAWA has just opened a free exhibition entitled We Hold Your Gaze_Remix by Like Queer Animals (LQA).

Nadeau explained in her First Fridays lecture launching the exhibition on Oct. 7 that the collaboration was central to the project. While describing how the two artists met, Nadeau explained her first encounter with Mott’s work and identifying with the creatures as “this is me.”

We Hold Your Gaze is the result of Mott and Nadeau building on each other’s work, and that act of collaboration was, for Nadeau, a form of translation. Not only does their project involve translating language, but working together requires them to translate their emotions and methods of expression — Mott refines Nadeau’s English grammar and Nadeau verifies when Mott has captured emotions in the creatures which, in turn, reflect their own emotions.

The creatures reflect Nadeau and Mott’s reactions to what gender and queer studies scholar Roderick A. Ferguson calls “the single-sexuality narrative.” The phrase refers to the whitewashing of queer history and the tendency to erase the complicated parts of historical events, such as the Stonewall riots, to cast them in a light that is more acceptable to the mainstream.

Because the creatures blend the anthropomorphic with multiple animal forms, they are impossible to describe as a single species. In this way, they capture the complexities, textures and gradients of queerness outside of those narrow permutations which mainstream culture has grown more tolerant towards.

Nadeau described this in the First Fridays lecture as a way to “invite audiences to reimagine how we see, feel, hear, touch and are touched by non-normative bodies,” adding that the artists refer to this as creating “a queer bestiary of emotions.”

Truly, the creatures defy easy description and are often — literally — cheeky and fantastical

One piece features a multi-breasted fox-deer almost twerking energetically as zig-zags emanate from its rear into the background. Another image shows a cat or deer-like creature reclining against a dreamy blue and gold backdrop with glittery pink wings reaching towards the edge of the frame.

Nadeau explained that the bestiaries the team was inspired by came with their own limitations. The creature designs in We Hold Your Gaze needed to evolve past the old bestiaries for LQA’s project.

Mott and Nadeau experimented with placing the creatures in images of Chicago. The locations they chose ranged from local landmarks to sites of historic events, including the site of the memorial for Fred Hampton of the Black Panthers.

In fact, the artists want these creatures to propel audiences into imagining “both personal and public” virtual environments.

The team has nearly finished a new project, The Hungry Ones, which will be a printed collection of Nadeau’s poetry and Mott’s illustrations. Beyond print, Mott explained that the team is seeking funding to develop an augmented reality (AR) project “very grand in scale.”

As for the current exhibition, each creature is mischievous and mysterious. They encourage slow consideration as they take time to fully take in, and the accompanying poetry humanizes them. Each poem gives voice to the otherwise indecipherable creatures.

As the team pursues funding for its future experimentation with AR, the indistinct backgrounds raise questions about where these creatures are headed next.

Lighting up the night with living lanterns