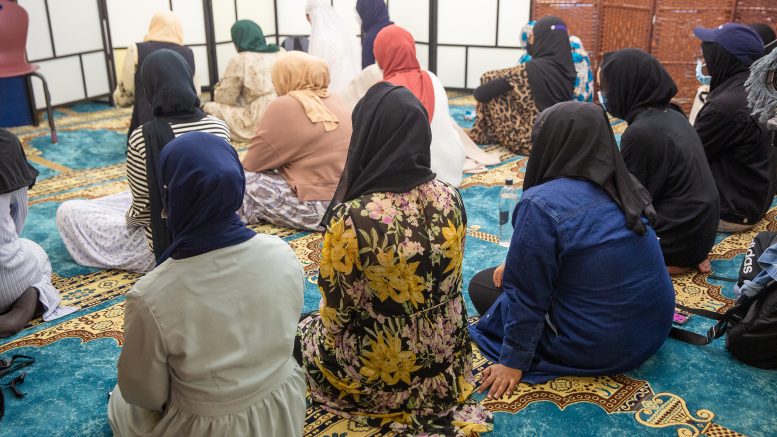 The University of Manitoba Muslim Students’ Association (MSA) celebrated the grand opening of its mosque on campus last week.

The university invested $120,000 in the newly renovated space, which is located in room E3-160 of the Price Faculty of Engineering.

MSA president Abdul Ahad said that plans to renovate the mosque, initially intended to increase the size of the space to accommodate more students, have existed since 2016.

“At that time the UMSU team, that was Tanjit Nagra, had a meeting with the general manager Thomas Blumer, who actually approached the university to ensure that we can renovate the mosque and make it bigger,” he explained.

“However, due to funding issues that we had and the challenges at that time, we actually came to the conclusion that it’s always better to beautify the mosque than have a bigger space, because students want also good quality.”

The renovations include a new carpet, a new library and additional water taps in the wudu area, where attendees perform ritual washing before prayer.

The university also paid to have new electrical outlets installed in the space to provide power to TV screens, as well as dehumidifiers for the wudu area.

MSA external relations manager Zahrah Tariq said she hopes the mosque can be a “very friendly and welcoming place for all students of all cultures, races, everyone.

“We want everyone to feel welcome here. We want it to be almost like a second home and I know it did fulfill that role back pre-pandemic, and we really missed having that ambience and that environment here,” she said.

Tariq said the university was very helpful in accommodating religious services throughout the pandemic, and that they provided temporary spaces for Muslim students.

“We actually had two separate places that they made available,” she said.

“One was in the Fitzgerald building, they gave us a classroom there for just regular prayers, because as Muslims we offer prayer five times a day.”

“We also had a second place that was a bigger space for Friday prayer, because we usually have more attendance then.”

The MSA’s post on Instagram noted that university president Michael Benarroch missed the inauguration of the mosque last week.

Ahad said that the organization plans to have another event to showcase the mosque to Benarroch and others who were unable to make it to the inauguration due to the busy long weekend just before the start of fall semester.

“Because at the end of the day, they’re the ones who made it possible for this project to actually flourish,” he said.

“The project was $120,000. It was fully funded by the university, and we wanted to actually showcase where the money was spent so that together we can actually work on some other amazing projects together within the future.”

U of M chancellor re-elected to another term