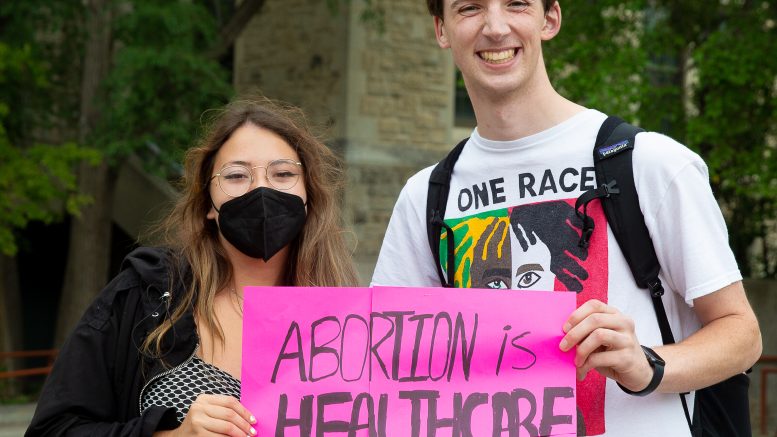 The anti-abortion group Canadian Centre for Bio-Ethical Reform (CCBR) held rallies at the U of M campus last Thursday and Friday.

The group, which displays graphic images of aborted fetuses as a part of their protests, was met with a counter-protest organized by the UMSU Women’s Centre and Justice for Women Manitoba.

Kyle Coffey, the Manitoba outreach director for CCBR, called abortion “a human rights violation,” and argued that it shouldn’t be allowed “in a just society.”

“These images show the reality of what abortion does, so that we can ground the conversation in the fact that abortion has a real victim, a tiny human being who is ripped limb from limb in abortion,” he said.

He said that CCBR comes to university campuses because at universities there are “many young people who are open to the pro-life perspective.”

In an Instagram post on Thursday, the Women’s Centre called on students to join a peaceful counter-protest.

A crowd of students affiliated with the counter-pro- test set up directly across from CCBR on Friday and held signs saying ”We are pro choice,” and “Not your body? Not your choice!”

Jessica Gibson, the president of Justice for Women Manitoba, called the group’s use of aborted fetus pictures “inappropriate.”

“I think it’s intended to be shocking and to be upsetting for folks that see it,” she said.

“The people that are going to be most upset by it are people who have either had to make that decision of having an abortion or who have decided against it, and I think that it does more harm seeing the images than it does actually [provoke] thought.”

She argued that seeing these images would be “incredibly triggering and retraumatizing” both for women who have experienced abortion and those who have decided against it.

Several cities, such as Hamilton and Calgary, have passed by-laws in response to such protests, including prohibiting the display of graphic images near schools and forbidding hanging signs on highway overpasses, where pictures of fetuses have been blamed for causing traffic accidents.

Gibson believes that protests that use this kind of imagery shouldn’t be allowed on campus.

UMSU women’s representative Christine Yasay said that the university only received 24 hours’ notice that CCBR would be coming to campus. Executives from UMSU were subsequently informed and vice-president finance and operations Brook Rivard sent an email to Yasay, the Women’s Centre and Justice for Women Manitoba.

“So we basically had that Wednesday evening to figure out what to do and you know, it was extremely frustrating just because of the time crunch,” she said.

“I’m very grateful for social media and Instagram because when I made the post, I saw that a lot of involved university students and UMSU executives and other councils reposted it, and we did get quite a decent amount of people on Thursday and Friday even though it was such short notice.”

An UMSU Instagram post on Thursday affirmed the union’s support for a pregnant person’s right to choose.

“UMSU, a union meant to support our student body and protect them from harm wherever we see it, cannot sit idly by when some attempt to shame our students for making personal choices about their own lives and futures,” the post read.

The university posted large signs near the protest warning students that they may be exposed to graphic images.

Gibson said that she wished the university had done more to warn students about the protest and the triggering material they could be exposed to.

“It felt like it was mostly our organization, UMSU posted some stuff, the Women’s Centre did some great stuff too, but the university itself, I didn’t see anything.”