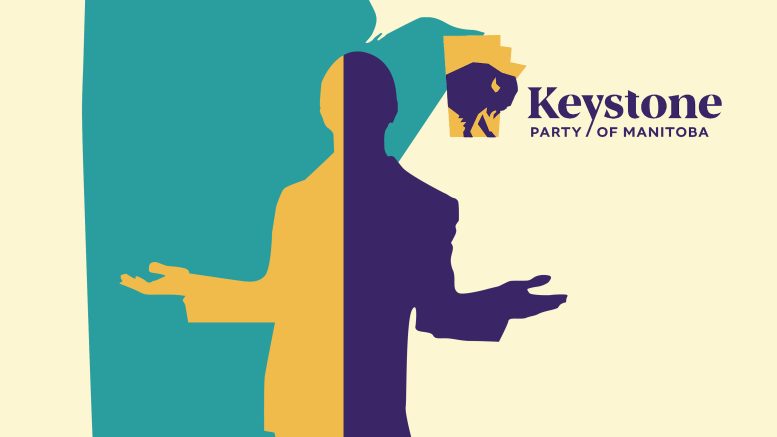 The newly-formed Keystone Party registered with Elections Manitoba On June 28. This granted the party the ability to endorse candidates on a ballot in the next Manitoba provincial election.

Although the Keystone party is in its infancy, core ideals have already been developed that shape its identity.

According to the party’s “statement of principles,” the maintaining of Canadians’ rights and freedoms, preserving a capitalist system that promotes free trade and private business and the limitation of governmental powers with an emphasis on empowering local municipalities are distinct qualities of the party’s identity.

Keystone party leader Kevin Friesen believes that through this model his government may help address Manitobans’ most pressing issues. Roads, infrastructure, healthcare, education and reconciliation are on the top of his list.

According to Friesen, the issues the party aims to address are “hot topics” concerning Manitobans.

“We didn’t form just to get one thing done now. This is a long-term project, we hope that this is a viable option for a long, long, time.”

Friesen also said that his party can help students. He believes that students today are in a tough position and deserve programs that will set them up for long term success.

He said the recession that the province is entering will be “very, very difficult” for students.

“It’s going to be very hard to get their feet under them.”

One priority for Friesen is establishing programs to help students gain that footing,

“A lot of you are going to be entrepreneurs and you’re going to want to build businesses, you’re going to do those things and it’s going to be very challenging. I think we all have to work together to get things rolling in a very different direction than they are right now.”

Another topic that has quickly become an embodiment of the party is its position on measures to prevent the spread of COVID-19. On July 15, Friesen expressed his disapproval of these measures while speaking at the party’s public launch at Vimy Ridge Memorial Park.

With a hard stance against COVID-19 measures, traditionally right-wing views and a colour scheme that contains mostly purple, similarities can be spotted between the Keystone party and the People’s Party of Canada.

Friesen said that he does not believe the two parties will ever have an affiliation.

However, he does recognize that many have labeled the party as right-wing. Although this may be the popular opinion, Friesen does not agree. He says that the Keystone party holds many left-wing ideas, and claims that when compared to the other political parties in Manitoba, it sits relatively in the centre of the political spectrum.

“I honestly think that we are a centre party, and that politics have moved so far left that we look right,” Friesen said.

“The two parties that are the majority of seats right now, they are so far left right now that we would definitely be right of them, but I would still say that we have a centre thinking.”

Professor Allen Mills does not agree with Friesen’s assessment.

The former chair of the University of Winnipeg political science depart- ment says that the NDP remains on the middle to left-wing of the political spectrum, while the Progressive Conservatives continue to occupy the centre-right.

Mills believes that the Keystone party may be in for a tough time while attempting to garner long term support.

“I’m not sure that it has any great consequence for the provincial Conservative party,” he said.

“I think that they’re nimble enough to head off any sort of concern that people have around the mandates, because I think that’s the issue that’s driven this particular development.”

Mills speculates that the Keystone party might find support in towns where there was a concentrated resistance to COVID-19 public measures in southern Manitoba. Even so, he still does not think that it will affect support for the Progressive Conservatives in that area, or give the Keystone party long term momentum there.

“This kind of concern may well resonate in those southern Manitoba constituencies where there was assorted resistance […] in places like Winkler, and Morden, Steinbach,

“I don’t see that the provincial Conservatives can’t head that off by adjusting to their concerns.”

Province’s fate lies in the hands of Wab Kinew