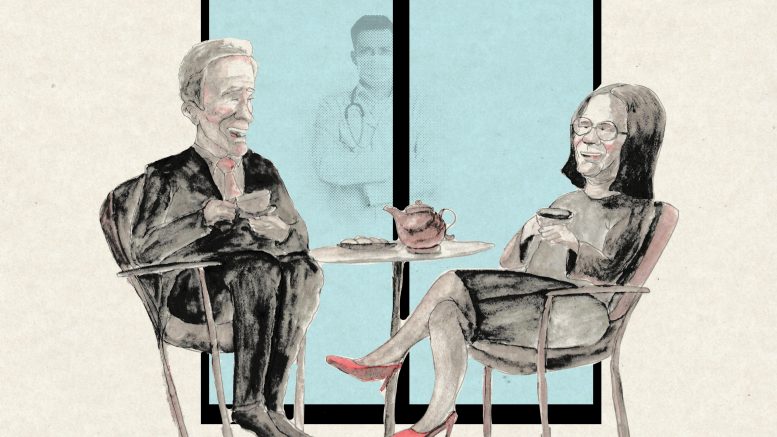 Early in the pandemic, Manitoba’s COVID-19 response was exemplary. It took five months from the initial outbreak for the provincial death toll to even hit double digits and another eight months to hit 100. Those numbers seem almost unbelievable in today’s context, where the premier seems to be actively trying to infect as many people as possible.

The proof of vaccination requirement was the first to fall, ending across the province on March 1. Two weeks later, capacity limits and mask mandates were discarded as well. Close contacts of positive cases haven’t had to isolate since Feb. 8 and self-isolation in the event of a positive test is only “recommended” instead of required as of March 15.

For a party so insistent on getting back to “normal,” Premier Heather Stefanson and her Progressive Conservatives (PCs) seem determined to keep COVID-19 in the province long-term.

As a result of their handiwork, more Manitobans are catching COVID than ever, with many observing on social media that positive tests have hit their circles harder than at any previous point during the pandemic. Anecdotal evidence? Maybe, but it’s all we’ve got. The Stefanson government, in its infinite wisdom, stopped providing daily updates on March 25, and even the weekly updates now being released are based on data from one week before.

The latest update, from April 7, listed 1,359 confirmed cases and an 18.6 per cent test positivity rate. But the actual number of cases in the province is likely much higher, considering most Manitobans don’t qualify for a PCR test. Even if someone tests positive on a rapid antigen test, they do not qualify for a PCR test unless they work directly with patients or in residential care facilities, are part of or visiting a First Nations community or have been referred by their doctor. There’s no guidance on how to inform the province if you test positive on a rapid test, so anyone who has administered their own COVID test at home isn’t showing up in provincial data at all.

In addition, despite continuing outbreaks in multiple personal care homes — including at least one new location this week — the province simply isn’t releasing any information on how many infections are occurring at care homes, even when media outlets repeatedly ask about it.

The province also changed its official definition of a COVID-related death on March 15 to require a laboratory-confirmed positive test within 30 days prior to death. So, if someone tested positive for the first time through a lab 31 days before dying, the province does not consider it a COVID death regardless of cause. Anyone struggling with long-term COVID symptoms or complications won’t be represented correctly in provincial data should those complications prove fatal.

A December 2021 review of 81 different medical studies on long COVID found that 30 per cent or more of all confirmed COVID cases, including asymptomatic ones, show some sign of long-term impairment. It’s a shame research like that can only include officially confirmed cases and not ones from self-administered rapid tests. Imagine how much scarier that number would be if it accurately reflected positivity rates. Don’t worry, the PCs saved you from that burden.

And just to really rub it in, the province ended its free KN95 mask distribution program at liquor stores, casinos and some MLA offices. If Manitobans want better protection, they have to pay for it.

So, to summarize: Stefanson dropped every restriction aimed at preventing the virus from spreading unchecked, shut down a program that provided one of the most effective masks against the current variants, made it dramatically more difficult to get tested in a way public health organizations can track, moved the goalposts on what deaths can be officially linked to COVID and is now limiting public access to what little flawed and incomplete data the province does have.

Call it what you will — institutionalized malice, navel-gazing, a frankly staggering level of sheer incompetence, perhaps all three. The PCs have chosen to prioritize personal greed and petty political grandstanding over the lives of Manitobans. Their legacy in this province will be one of relentless infrastructural destruction and moral bankruptcy in a situation where their communities desperately needed support.

And all the COVID-19 data, released or otherwise, points to a single conclusion: hundreds of Manitobans will die preventable deaths or face life-altering complications from long COVID, and it will be Heather Stefanson’s fault.

CAPTION: Early in the pandemic, Manitoba’s COVID-19 response was exemplary. It took five months from the initial outbreak for the provincial death toll to even hit double digits and another eight months to hit 100. Those numbers seem almost unbelievable in today’s context, where the premier seems to be actively trying to infect as many people as possible.