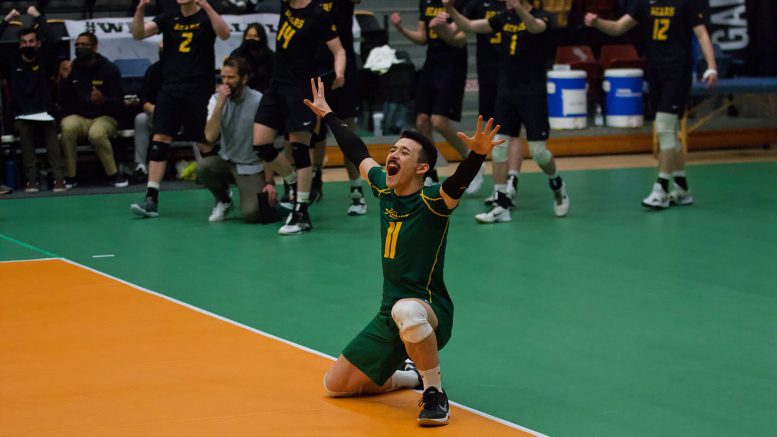 For the first time since 1976, the University of Manitoba played host to the U Sports men’s volleyball national championship. Unfortunately for the Bisons, despite home advantage, the squad was unable to secure the title, falling to the Trinity Western University Spartans in the quarterfinal. The University of Alberta Golden Bears went on to defeat the Spartans 3-1 in the tournament finale, crowning themselves Canadian university champions.

Prior to the commencement of the tournament, Gene Muller, Bison Sports director of athletics and recreation, emphasized the impact hosting events like this year’s national championship and the Canada West track and field meet have on the community. He stressed that is not only important for the athletes and coaches, but also for students and younger Bison fans as well.

“We will have hosted five championship events in the last six years I think, and in the 10 years before that we only hosted one event,” said Muller.

“It gives our community a chance to see how special our student athletes are. It gives the student athletes an experience of what it’s like competing in an important event at home. So, it’s enormously important for us […] About five years ago we set up in our strategic plan to say we want to host more events at home. So, I’m really proud of our team and our athletes that we are able to achieve that.”

Coming into the tournament as the eighth seed, the Bisons were in tough against the top-ranked Spartans. Led by U Sports men’s volleyball player of the year Derek Epp, TWU was easily the best team in Canada West, losing only one of its 16 games this season. In the playoffs, TWU only lost three sets over seven matches en route to the program’s seventh conference title.

Trailing early in the first set, the Bisons looked a bit rusty after not playing a game in nearly three weeks. Led by Epp, TWU made a mockery of the Bisons’ defence. The Spartans easily hammered through the U of M blocks, spiking countless kills to the floor. On the return, TWU was also capable. Containing the Bisons’ attacks with poise, the Spartans were easily able to prevent the herd from gaining any sustained momentum. In front of a raucous home crowd, TWU walloped the Bisons, taking the first set 25-13.

The U of M had a marginally better effort in the second. The Bisons’ fans cheered the home side on, willing the herd to play much more aggressively. Bison left side Spencer Grahame hustled on both ends of the floor, diving for balls in the back court and recording five kills at the net. Even so, TWU continued to pick apart the Bisons’ defence. Brodie Hofer recorded four kills, while the Elser brothers Jesse and Mathias also contributed steady offence to give the Spartans the second set 25-17.

Knowing their team was on the brink of elimination, the U of M faithful rocked the Investors Group Athletic Centre. The Bisons battled harder than they had all match, but once again found themselves playing catch-up early in the set. Down 16-8, a couple errors by the hands of the Spartans gave the U of M a bit more life. Capitalizing on TWU’s mistakes, the Bisons cut the lead in half. Back-and-forth play saw Grahame and teammates Owen Schwartz and Ben Carleton record kills. Unfortunately, TWU outpaced the herd, winning the set 25-19 and heading to the semifinals.

After the loss, U of M head coach Arnd Ludwig broke down his team’s game. He applauded his outside hitters’ efforts and praised the Spartans for their performance.

“I think […] our outside hitters did a pretty good job today,” said Ludwig. “I think Trinity played unbelievable […] they served really, really hard. We couldn’t […] get a good offence really going because we were struggling with our passes.”

With the loss, the Bisons moved on to the consolation semifinal round to fight for fifth place in the tournament. Ludwig spelled out his team’s next actions in preparation for Saturday’s game.

“We’re going to watch all this game and we play the loser of that game,” said Ludwig.

The next day, the Bisons did just that. Looking much more in sync, the herd put away a scrappy University of Toronto team in straight sets to move on to the consolation final on Sunday. Once again, Grahame led the Bisons’ offence with 12 kills, while Carleton reared the attack with 10.

On the last day of the tournament, the Bisons put up a valiant effort but fell to the McMaster Marauders in four sets. Although the herd fell short of securing any hardware, an impressive showing against the top teams in the country bodes well for the future of the men’s volleyball program.