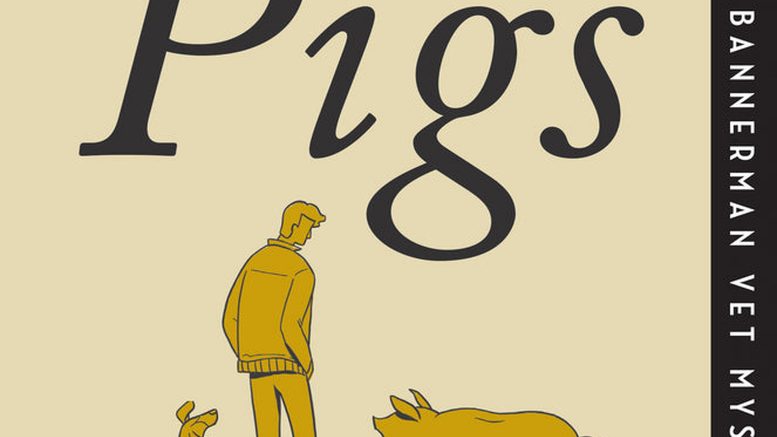 There have been many variations on the classic detective story over the years, with just as wide a range of subjects in the role of crime-solving protagonist. As such, it’s not uncommon to read books about unlikely detectives — but have you ever read about a veterinarian who solves crimes?

This is exactly what local author Philipp Schott imagines in his upcoming book Fifty-Four Pigs: A Dr. Bannerman Vet Mystery. The novel focuses on Dr. Peter Bannerman, a veterinarian in the town of New Selfoss, a fictional Icelandic-Canadian community akin to Gimli, Man.

Fifty-Four Pigs is Schott’s fourth book to date and reflects his own specialized knowledge of veterinary medicine, as he is a practicing veterinarian here in Winnipeg.

Fifty-Four Pigs protagonist Peter loves logic and objectivity, concepts that aid him not only in his veterinarian practice but also in assisting his fellow community members — he is known around town for helping to solve mysteries, as well as for his attempts to find missing people with his trusty dog, Pippin.

When Peter’s friend Tom’s swine barn suddenly explodes one day, they soon find that there is a darker side to the tragedy, and Tom becomes the prime suspect in a murder case. With Pippin at his side, Peter decides to try and clear his friend’s name with his reasoning skills, but is soon in over his head. After another murder and a string of break-ins take place around town, Peter’s involvement with the case becomes dangerous and, despite warnings from his RCMP officer brother-in-law Kevin, Peter pursues leads that point to much larger, potentially international issues.

Filled with twists and turns, Schott’s take on the detective novel is quirky, fun and lighthearted, but also rich in character and worldbuilding. Throughout the novel, we discover key aspects of New Selfoss’s history and loads of detail regarding the backgrounds and connections between members of its community. However, this attention to detail provides the greatest insight into Peter himself, and truly reflects the way that our protagonist sees the world — meticulously, logically and with a hyper-observant eye.

There is also something to be said for the charm that being set in Manitoba brings to the book, especially for those of us who live here. It is not often that we get to see our province represented in novels like FIFTY-FOUR PIGS, but Manitoba is a perfect setting for the sleepy small town mentality that Schott creates in New Selfoss — it provides intrigue, but also serves as a reminder that crime happens everywhere, even in the “safest” and most unexpected places.

Fifty-Four Pigs: A Dr. Bannerman Vet Mystery is currently available for pre-order from major retailers. The book will be available for in-store purchase starting April 19.

Love in the time of climate crisis